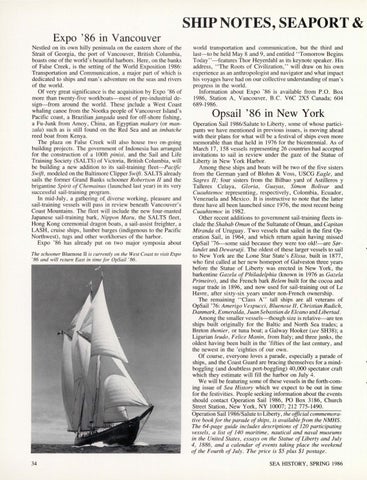 SHIP NOTES, SEAPORT &amp; Expo &#39;86 in Vancouver Nestled on its own hilly peninsula on the eastern shore of the Strait of Georgia, the port of Vancouver, British Columbia, boasts one of the world&#39;s beautiful harbors. Here , on the banks of False Creek, is the setting of the World Exposition 1986: Transportation and Communication, a major part of which is dedicated to ships and man&#39;s adventure on the seas and rivers of the world . Of very great significance is the acquisition by Expo &#39; 86 of more than twenty-five workboats-most of pre-industrial design-from around the world. These include a West Coast whaling canoe from the Nootka people of Vancouver Island&#39;s Pacific coast, a Brazilian jangada used for off-shore fishing , a Fu-Junk from Amoy, China, an Egyptian makary (or manzala) such as is still found on the Red Sea and an imbatche reed boat from Kenya. The plaza on False Creek will also house two on-going building projects. The government of Indonesia has arranged for the construction of a lOOft pinisi, and the Sail and Life Training Society (SALTS) of Victoria , British Columbia, will be building a new addition to its sail-training fleet-Pacific Swift, modeled on the Baltimore Clipper Swift. SALTS already sai ls the former Grand Banks schooner Robertson II and the brigantine Spirit of Chemainus (launched last year) in its very successful sail-training program. In mid-July , a gathering of_ diverse working, pleasure and sail-training vessels will pass in review beneath Vancouver&#39; s Coast Mountains. The fleet will include the new four-masted Japanese sai l-training bark, Nippon Maru , the SALTS fleet , Hong Kong ceremonial dragon boats, a sail-assist freighter, a LASH, cruise ships, lumber barges (indigenous to the Pacific Northwest) , tugs and other workhorses of the harbor. Expo &#39;86 has already put on two major symposia about The schooner Bluenose II is currently on the West Coast to visit Expo &#39;86 and will return East in time for OpSail &#39;86.

world transportation and communication , but the third and last-to be held May 8 and 9, and entitled &quot;Tomorrow Begins Today&quot;-features Thor Heyerdahl as its keynote speaker. His address, &quot;The Roots of Civilization,&quot; will draw on his own experience as an anthropologist and navigator and what impact his voyages have had on our collective understanding of man &#39; s progress in the world . Information about Expo &#39;86 is available from P.O . Box 1986, Station A, Vancouver, B.C. V6C 2X5 Canada; 604 689-1986.

Opsail &#39;86 in New York Operation Sail 1986/Salute to Liberty , some of whose participants we have mentioned in previous issues, is moving ahead with their plans for what will be a festival of ships even more memorable than that held in 1976 for the bicentennial. As of March 17, 158 vessels representing 26 countries had accepted invitations to sail in review under the gaze of the Statue of Liberty in New York Harbor. Among these ships and boats will be two of the five sisters from the German yard of Blohm &amp; Voss, USCG Eagle, and Sagres II; four sisters from the Bilbao yard of Astilleros y Talleres Celaya, Gloria, Guayas, Simon Bolivar and Cuauhtemoc representing , respectively, Colombia, Ecuador, Venezuela and Mexico . It is instructive to note that the latter three have all been launched since 1976, the most recent being Cuauhtemoc in 1982. Other recent additions to government sail-training fleets include the Shabab Oman of the Sultanate of Oman , and Capitan Miranda of Uruguay. Two vessels that sailed in the first Operation Sail , in 1964, and which return again having missed OpSail &#39;76--some said because they were too old!-are SÂ˘rlandet and Dewarutji. The oldest of these larger vessels to sail to New York are the Lone Star State&#39;s Elissa, built in 1877 , who first called at her new homeport of Galveston three years before the Statue of Liberty was erected in New York, the barkentine Gazela of Philadelphia (known in 1976 as Gaze/a Primeiro), and the French bark Belem built for the coc9a and sugar trade in 1896, and now used for sail-training out of Le Havre, after sixty-six years under non-French ownership. The remaining &quot;Class A&quot; tall ships are all veterans of OpSail &#39;76: Amerigo Vespucci, Bluenose II , Christian Radich, Danmark, Esmeralda, Juan Sebastian de Elcano and Libertad. Among the smaller vessels-though size is relative-are ten ships built originally for the Baltic and North Sea trades; a Breton thonier, or tuna boat; a Galway Hooker (see SH38); a Ligurian leudo, Felice Manin , from Italy ; and three junks , the oldest having been built in the &#39; fifties of the last century, and the newest in the &#39;eighties of our own. Of course, everyone loves a parade, especially a parade of ships, and the Coast Guard are bracing themselves for a mindboggling (and doubtless port-boggling) 40,000 spectator craft which they estimate will fill the harbor on July 4. We will be featuring some of these vessels in the forth-coming issue of Sea History which we expect to be out in time for the festivities. People seeking information about the events should contact Operation Sail 1986, PO Box 3186, Church Street Station, New York, NY 10007 ; 212 775-1490. Operation Sail 1986/Salute to Liberty, the official commemorative book for the parade of ships, is available from the NMHS. The 64-page guide includes descriptions of 120 participating vessels, a list of 140 maritime, nautical and naval museums in the United States, essays on the Statue of Liberty and July 4, 1886, and a calendar of events taking place the weekend of the Fourth of July. The price is $5 plus $1 postage . SEA HISTORY, SPRING 1986