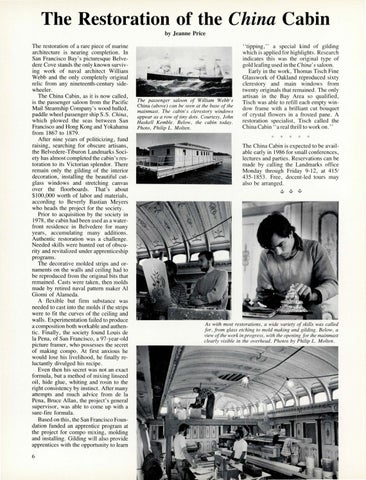 The Restoration of the China Cabin by Jeanne Price The restoration of a rare piece of marine architecture is nearing completion . In San Francisco Bay's picturesque Belvedere Cove stands the only known surviving work of naval architect William Webb and the onl y completely original relic from any nineteenth-century sidewheeler. The China Cabin , as it is now called , is the passenger saloon from the Pacific Mail Steamship Company' s wood hulled, paddle wheel passenger ship S .S. China, which plowed the seas between San Francisco and Hong Kong and Yokahama from 1867 to 1879 . After nine years of politicizing, fund raising, searching for obscure artisans, the Belvedere-Tiburon Landmarks Society has almost completed the cabin 's restoration to its Victorian splendor. There remain onl y the gilding of the interior decoration, installing the beautiful cutglass windows and stretching canvas over the flo orboards. That' s about $ 100,000 worth of labor and materials, according to Beverly Bastian Meyers who heads the project for the society . Prior to acquisition by the society in 1978 , the cabin had been used as a waterfront residence in Belvedere for many years, accumulating many additions. Authentic restoration was a challenge . Needed skills were hunted out of obscurity and rev italized under apprenticeship programs. The decorative molded strips and ornaments on the walls and ceiling had to be reproduced fro m the original bits that remained . Casts were taken , then molds made by retired naval pattern maker Al Giomi of Alameda . A fl ex ible but firm substance was needed to cast into the molds if the strips were to fit the curves of the ceiling and walls. Ex perimentation fa iled to produce a composition both workable and authentic . Finally , the society fo und Louis de la Pena, of San Francisco , a 97-year-old picture framer, who possesses the secret of making compo . At first anxious he would lose his livelihood, he fin ally reluctantly di vulged his recipe . Even then hi s secret was not an exact formul a , but a method of mi xing linseed oil , hide glue, whiting and rosin to the right consistency by instinct. After many attempts and much advice fro m de la Pena, Bruce Allan , the project's general supervisor, was able to come up with a sure-fire fo rmula. Based on this, the San Francisco Foundation fund ed an apprentice program at the project fo r compo mi xing , molding and installing . G ilding wi ll also prov ide apprentices with the opportunity to learn 6

The passenger saloon of William Webb's China (above) can be seen at the base of the mainmast . The cabin's clerestory windows appear as a row of tiny dots . Courtesy, John Haskell Kemble. Below, the cabin today. Photo, Philip L. Molten .

" tipping, " a spec ial kind of gilding which is applied for highlights. Research indicates this was the original ty pe of gold leafin g used in the China's saloon . Earl y in the work, Thomas Ti sch Fine G lasswork of Oakland reproduced sixty clerestory and main wi ndows fro m twenty originals that remained. The onl y artisan in the Bay Area so qualified , Tisch was able to refill each empty window fra me with a brilliant cut bouquet of crystal fl owers in a fros ted pane . A restoration specialist, Tisch called the China Cabin ''a real th ril l to work on. '' ;!:

The China Cabin is expected to be available earl y in 1986 for small conferences , lectu res and parties . Reservations can be made by calling the Landmarks offi ce Monday thro ugh Friday 9- 12, at 41 5/ 435-1 853 . Free , docent-led tours may also be arranged. J,

As with most restorations, a wide variety of skills was called fo r, from glass etching to mold making and gilding. Below, a view of the work in progress, with the opening for the mainmast clearly visible in the overhead. Photos by Philip L. Molten.