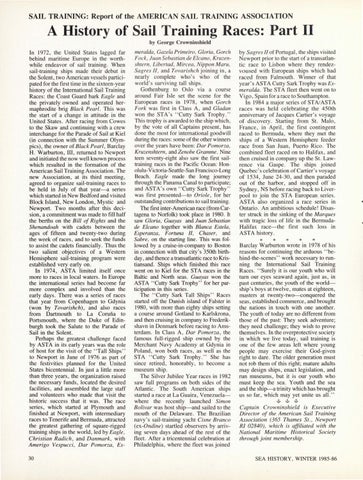 A History of Sail Training Races: Part II by George Crowninshield In 1972, the United States lagged far behind maritime Europe in the worthwhile endeavor of sai l training . When sail-training ships made their debut in the Solent, two American vessels participated for the first time in the sixteen-year history of the International Sail Training Races: the Coast Guard bark Eagle and the privately owned and operated hermaphrodite brig Black Pearl. This was the start of a change in attitude in the United States. After racing from Cowes to the Skaw and continuing with a crew interchange for the Parade of Sail at Kiel (in connection with the Summer Olympics) , the owner of Black Pearl, Barclay H. Warburton, III, returned to Newport and initiated the now well known process which resulted in the formation of the American Sail Training Association. The new Association, at its third meeting , agreed to organize sail-training races to be held in July of that year-a series which started in New Bedford and visited Block Island, New London , Mystic and Newport. Two months after this decision, a commitment was made to fill half the berths on the Bill of Rights and the Shenandoah with cadets between the ages of fifteen and twenty-two during the week of races , and to seek the funds to assist the cadets financially . Thus the two salient objectives of a Western Hemisphere sail-training program were established very early on . In 1974, ASTA limited itself once more to races in local waters . In Europe the international series had become far more complex and involved than the early days. There was a series of races that year from Copenhagen to Gdynia (won by Tovarishch), and also races from Dartmouth to La Coruiia to Portsmouth , where the Duke of Edinburgh took the Salute to the Parade of Sail in the Solent. Perhaps the greatest challenge faced by ASTA in its early years was the role of host for the visit of the &quot; Tall Ships&quot; to Newport in June of 1976 as part of the festivities planned for the United States bicentennial. In just a little more than three years, the organization raised the necessary funds , located the desired facilities, and assembled the large staff and volunteers who made that visit the historic success that it was. The race series, which started at Plymouth and finished at Newport, with intermediary races to Tenerife and Bermuda, attracted the greatest gathering of square-rigged training ships in the world, led by Eagle , Christian Radich , and Danmark, with Amerigo Vespucci , Dar Pomorza, Es30

meralda, Gazela Primeiro, Gloria, Gorch Fock, Juan Sebastian de Elcano, Kruzenshtern, Libertad, Mircea , Nippon Maru, Sagres II, and Tovarishch joining in, a nearly complete who&#39; s who of the world&#39;s surviving tall ships. Gothenburg to Oslo via a course around Fair Isle set the scene for the European races in 1978, when Gorch Fork was first in Class A, and Gladan won the STA &#39;s &quot;Cutty Sark Trophy. &quot; This trophy is awarded to the ship which, by the vote of all Captains present, has done the most for international goodwill during the races: some of the other winners over the years have been: Dar Pomorza, Kruzenshtern, and Zenobe Gramme. Nine teen seventy-eight also saw the first sailtraining races in the Pacific Ocean: Honolulu-Victoria-Seattle-San Francisco-Long Beach. Eagle made the long journey through the Panama Canal to participate; and ASTA&#39;s own &quot;Cutty Sark Trophy &quot; was first presented-to Oriole, for her outstanding contributions to sail training . The frrst inter-American race (from Cartagena to Norfolk) took place in 1980. It saw Gloria, Guayas and Juan Sebastian de Elcano together with Blanca Estela, Esperanza, Fortuna II, Chaser, and Sabre, on the starting line. This was followed by a cruise-in-company to Boston in connection with that city&#39;s 350th birthday , and thence a transatlantic race to Kristiansand . Ships which finished this race went on to Kiel for the STA races in the Baltic and North seas. Guayas won the ASTA &quot; Cutty Sark Trophy&quot; for her participation in this series. The &quot;Cutty Sark Tall Ships&quot; Races started off the Danish island of Falster in 1980, with more than eighty ships setting a course around Gotland to Karlskrona , and then cruising in company to Frederikshavn in Denmark before racing to Amsterdam. In Class A, Dar Pomorza , the famous full-rigged ship owned by the Merchant Navy Academy at Gdynia in Poland , won both races , as well as the ST A &#39;&#39;Cutty Sark Trophy.&#39; &#39; She has since retired , honorably , to become a museum ship. The Silver Jubilee Year races in 1982 saw full programs on both sides of the Atlantic. The South American ships started a race at La Guaira , Venezuelawhere the recently launched Simon Bolivar was host ship--and sailed to the mouth of the Delaware. The Brazilian navy&#39;s sail-training yacht Cisne Branco (ex-Ondine) startled observers by arriving seven days ahead of the rest of the fleet. After a tricentennial celebration at Philadelphia, where the fleet was joined

by Sag res II of Portugal, the ships visited Newport prior to the start of a transatlantic race to Lisbon where they rendezvoused with European ships which had raced from Falmouth. Winner of that year&#39;s AST A Cutty Sark Trophy was Esmeralda. The STA fleet then went on to Vigo, Spain for a race to Southampton. In 1984 a major series of ST NASTA races was held celebrating the 450th anniversary of Jacques Cartier&#39;s voyage of discovery. Starting from St. Malo , France, in April, the first contingent raced to Bermuda, where they met the ships of a Western Hemisphere feeder race from San Juan , Puerto Rico . The combined fleet raced on to Halifax , and then cruised in company up the St. Lawrence via Gaspe. The ships joined Quebec&#39;s celebration of Cartier&#39; s voyage of 1534, June 24-30, and then paraded out of the harbor, and stopped off in Sydney, NS before racing back to Liverpool to join the STA European series. AST A also organized a race series in Ontario. An ambitious schedule! Disaster struck in the sinking of the Marques with tragic loss of life in the BermudaHalifax race-the first such loss in AST A history.

Barclay Warburton wrote in 1978 of his reasons for continuing the arduous &quot; behind-the-scenes &quot; work necessary to running the International Sail Training Races. &quot;Surely it is our youth who will turn our eyes seaward again, just as, in past centuries , the youth of the worldship&#39;s boys at twelve , mates at eighteen, masters at twenty-two--conquered the seas, established commerce, and brought the nations in touch with one another. The youth of today are no different from those of the past: They seek adventure; they need challenge; they wish to prove themselves . In the overprotective society in which we live today, sail training is one of the few areas left where young people may exercise their God-given right to dare . The older generation must not rob them of this right; mature adults may design ships, enact legislation, and run museums , but it is our youth who must keep the sea. Youth and the sea and the ship--a trinity which has brought us so far , which may yet unite us all.&quot;