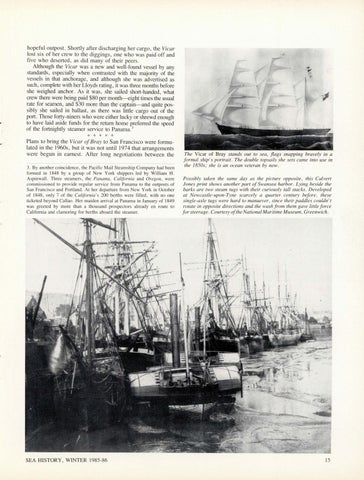 hopeful outpost. Shortly after di scharging her cargo , the Vicar lost six of her crew to the diggings, one who was paid off and five who deserted, as did many of their peers. Although the Vicar was a new and well-found vessel by any standards, especial ly when contrasted with the majority of the vessels in that anchorage, and although she was advertised as such, complete with her Lloyds rating, it was three months before she weighed anchor. As it was, she sailed short-handed , what crew there were being paid $80 per month-eight times the usual rate for seamen , and $30 more than the captain-and quite possibly she sailed in ballast, as there was little cargo out of the port. Those forty-n iners who were either lucky or shrewd enough to have laid aside funds for the return home preferred the speed of the fortnightly steamer service to Panama.3

Plans to bring the Vicar of Bray to San Francisco were formulated in the 1960s , but it was not until 1974 that arrangements were begun in earnest. After long negotiations between the 3. By another coincidence , the Pac ific Mai l Steamship Company had been formed in 1848 by a group of New York shippers led by William H. Aspinwall. Three steamers, the Panama, Californ ia and Oregon, were commiss ioned to provide regul ar service from Panama to the outposts of San Francisco and Portland . At her departure from New York in October of 1848 , on ly 7 of the California's 200 berths were filled , with no one ticketed beyond Call ao. Her maiden arrival at Panama in January of 1849 was greeted by more than a thousand prospectors already en route to California and clamoring for berths aboard the steamer.

The Vicar of Bray stands out to sea, flags snapping bravely in a formal ship's portrait. The double topsails she sets came into use in the 1850s; she is an ocean veteran by no w. Possibly taken the same day as the picture opposite, this Calvert Jones print shows another part of Swansea harbor. Lying beside the barks are two steam tugs with their curiously tall stacks. Developed at Newcastle-upon-Tyne scarcely a quarter century before, these single-axle tugs were hard to manuever, since their paddles couldn' t rotate in opposite directions and the wash from them gave little force for steerage . Courtesy of the National Maritim e Museum , Greenwich.