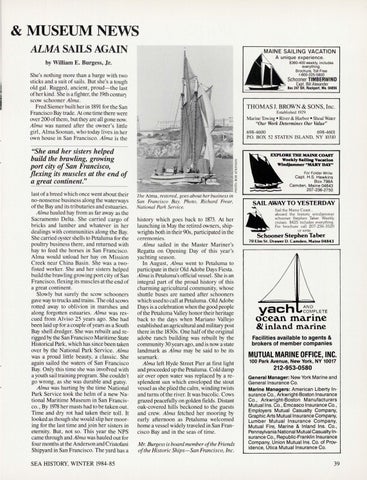 She&#39;s nothing more than a barge with two sticks and a suit of sails. But she&#39;s a tough old gal. Rugged , ancient , proud-the last of her kind. She is a fighter, the 19th centuf) scow schooner Alma . Fred Siemer built her in 1891 for the San Francisco Bay trade. At one time there were over 200 of them, but they are all gone now. Alma was named after the owner&#39;s little girl, Alma Soonan, who today lives in her own house in San Francisco. Alma is the

&quot;She and her sisters helped build the brawling, growing port city of San Francisco, flexing its muscles at the end of a great continent.&quot; last of a breed which once went about their no-nonsense business along the waterways of the Bay and its tributaries and estuaries . Alma hauled hay from as far away as the Sacramento Delta. She carried cargo of bricks and lumber and whatever in her dealings with communities along the Bay. She carried oyster shells to Petaluma for the poultry business there, and returned with hay to feed the horses in San Francisco. Alma would unload her hay on Mission Creek near China Basin. She was a twofisted worker. She and her sisters helped build the brawling growing port city of San Francisco, flexing its muscles at the e nd of a great continent. Slowly but surely the scow schooners gave way to trucks and trains. The old scows rotted away to oblivion in marshes and along forgotten estuaries. Alma was rescued from Alviso 25 years ago. She had been laid up for a couple of years as a South Bay shell dredger. She was rebuilt and rerigged by the San Francisco Maritime State Historical Park, which has since been taken over by the National Park Service. Alma was a proud little beauty, a classic. She again sailed the waters of San Francisco Bay. Only this time she was invotved with a youth sail training program. She couldn&#39;t go wrong, as she was durable and gutsy. Alma was hurting by the time National Park Service took the helm of a new National Maritime Museum in San Francisco., By 1978 her masts had to be taken o ut. Time and dry rot had taken their toll. It looked as though she would slip he r mooring for the last time and join her sisters in eternity. But, not so. This year the NPS came through and Alma was hauled out for four months at the Anderson and Cristofani Shipyard in San Francisco. The yard has a SEA HIS1DRY, WINTER 1984-85

history which goes back to 1873. At her launching in May the retired owners, shipwrights both in their 90s, participated in the ceremonies. Alma sailed in the Master Mariner&#39;s Regatta on Opening Day of this year&#39;s yachting season . In August , Alma went to Petaluma to participate in their Old Adobe Days Fiesta. Alma is Petaluma&#39;s official vessel. She is an integral part of the proud history of this charming agricultural community, whose shuttle buses are named after schooners which used to call at Petaluma. Old Adobe Days is a celebration when the good people of the Petaluma Valley honor their heritage back to the days when Mariano Vallejo established an agricultural and military post there in the 1830s. One half of the original adobe ranch building was rebuilt by the community 30 years ago, and is now a state landmark as Alma may be said to be its seamark. Alma left Hyde Street Pier at first light and proceeded up the Petaluma. Cold damp air over open water was replaced by a resplendent sun which enveloped the stout vessel as she plied the calm , winding twists and turns of the river. It was bucolic. Cows grazed peacefully on golden fields. Distant oak-covered hills beckoned to the guests and crew. Alma fetched her mooring by early afternoon as Petaluma welcomed home a vessel widely traveled in San Francisco Bay and in the seas of time.