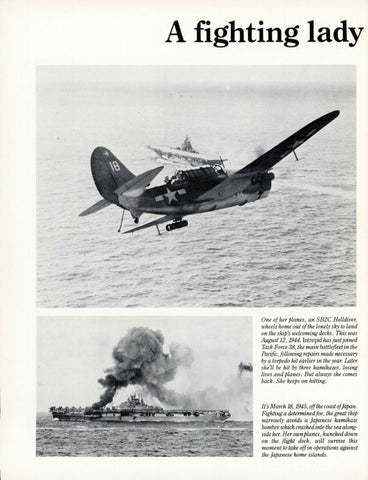 One of her planes, an SB2C Helldiver, wheels home out of the lonely sky to land on the ship&#39;s welcoming decks. This was August 12, 1944. Intrepid has just joined Task Force 38, the main battlefleet in the Pacific, following repairs made necessary by a torpedo hit earlier in the year. Later she&#39;ll be hit by three kamikazes, losing lives and planes. But always she comes back. She keeps on hitting.

It&#39;s March 18, 1945, offthe coast ofjapan. Fighting a determined foe, the great ship narrowly avoids a Japanese kamikaze bomber which crashed into the sea alongside her. Her own planes, hunched down on the flight deck, will survive this moment to take off in operations against the Japanese home islands.