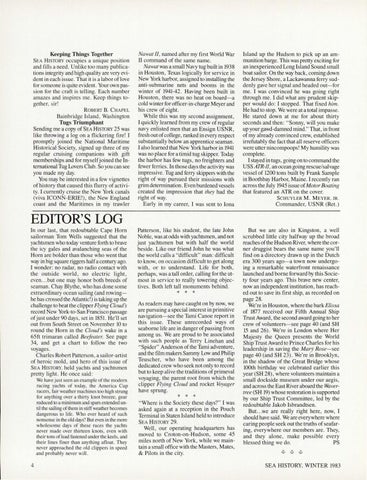 Keeping Things Together SEA HISTORY occupies a unique position and fills a need . Unlike too many publications integrity and high quality are very evident in each issue. That it is a labor of love for someone is quite evident . Your own passion for the craft is telling. Each number amazes and inspires me. Keep things together, sir! ROB ERT B. CHAPEL Bainbridge Island , Washington Tugs Triumphant Sending me a copy of SEA HISTORY 25 was like throwing a log on a flickering fire! I promptly joined the National Maritime Historical Society, signed up three of my regular cruising companions with gift memberships and for myself joined the International Tug Lovers Club. So you can see you made my day. You may be interested in a few vignettes of history that caused this flurry of activity. I currently cruise the New York canals (viva ICONN-ERIE!), the New England coast and the Maritimes in my trawler

Nawat II, named after my first World War II command of the same name. Nawatwasasmall Navy tug built in 1938 in Houston, Texas logically for service in New York harbor, assigned to installing the anti-submarine nets and booms in the winter of 1941-42. Having been built in Houston , there was no heat on board-a cold winter for officer-in-charge Meyer and his crew of eight. While this was my second assignment , I quickly learned from my crew of regular navy enlisted men that an Ensign USNR, fresh out of college, ranked in every respect substantially below an apprentice seaman . I also learned that New York harbor in 1941 was no place for a timid tug skipper. Today the harbor has few tugs, no freighters and fewer ferries. In those days the activity was impressive. Tug and ferry skippers with the right of way pursued their missions with grim determination. Even burdened vessels created the impression that they had the right of way. Early in my career, I was sent to Iona

Island up the Hudson to pick up an ammunition barge. This was pretty exciting for an inexperienced Long Island Sound small boat sailor. On the way back, coming down the Jersey Shore, a Lackawanna ferry suddenly gave her signal and headed out- for me. I was convinced he was going right through me. I did what any prudent skipper would do: I stopped . That fixed him. He had to stop. We were at a total impasse. He stared down at me for about thirty seconds and then : " Sonny, will you make up your gawd-damned mind." That, in front of my already convinced crew, established irrefutably the fact that all reserve officers were utter nincompoops! My humility was complete. I stayed in tugs, going on to command the USS AIR-11, an ocean going rescue/salvage vessel of 1200 tons built by Frank Sample in Boothbay Harbor, Maine. I recently ran across the July 1945 issue of Motor Boating that featured an ATR on the cover. SCHUYLER M . MEYER , JR. Commander, USNR (Ret.)

Patterson , like his student, the late John Noble, was at odds with yachtsmen, and not just yachtsmen but with half the world beside. Like our friend John he was what the world calls a "difficult" man: difficult to know, on occasion difficult to get along with , or to understand. Life for both , perhaps, was a tall order, calling for the utmost in service to really towering objectives . Both left tall monuments behind .

But we are also in Kingston , a well scrubbed little city halfway up the broad reaches of the Hudson River, where the corner druggist bears the same name you'll find on a directory drawn up in the Dutch era 300 years ago- a town now undergoing a remarkable waterfront renaissance launched and borne forward by this Society four years ago. This brave new center, now an independent institution, has reached out to save its first ship, as recorded on page 28. We're in Houston, where the bark Elissa of 1877 received our Fifth Annual Ship Trust Award , the second award going to her crew of volunteers- see page 40 (and SH 15 and 26) . We're in London where Her Majesty the Queen presents the World Ship Trust Award to Prince Charles for his leadership in saving the Mary Rose- see page 40 (and SH 23) . We're in Brooklyn , in the shadow of the Great Bridge whose lOOth birthday we celebrated earlier this year (SH 28) , where volunteers maintain a small dockside museum under our aegis, and across the East River aboard the ~verÂ­ tree (SH 19) whose restoration is supported by our Ship Trust Committee, led by the redoubtable Jakob Isbrandtsen. But. . .we are really right here, now, I should have said . We are everywhere where caring people seek out the truths of seafaring, everywhere our members are. They, and they alone, make possible every blessed thing we do. PS

EDI1DR'S LOG In our last, that redoubtable Cape Hom sailorman Tom Wells suggested that the yachtsmen who today venture forth to brave the icy gales and avalanching seas of the Hom are bolder than those who went that way in big square riggers half a century ago. I wonder: no radar, no radio contact with the outside world , no electric light , even .. . but one may honor both breeds of seaman. Chay Blythe, who has done some extraordinary ocean sailing (and rowinghe has crossed the Atlantic!) is taking up the challenge to beat the clipper Flying Cloud's record New York-to-San Francisco passage of just under 90 days, set in 1851. He'll set out from South Street on November 10 to round the Hom in the Cloud 's wake in a 65ft trimaran called Beefeater. See page 34, and get a chart to follow the two voyages . Charles Robert Patterson, a sailor-artist of heroic mold , and hero of this issue of SEA HISTORY, held yachts and yachtsmen pretty light. He once said: We have just seen an example of the modern racing yachts of today, the America Cup racers, fair weather machines too high strung for anything over a thirty knot breeze, gear reduced to a minimum and spars extended until the sailing of them in stiff weather becomes dangerous to life. Who ever heard of such nonsense in the old days? But even in the more wholesome days of these races the yachts never made over thirteen knots, even with their tons of lead fastened under the keels, and their lines finer than anything afloat. They never approached the old clippers in speed and probably never will.

* * * As readers may have caught on by now, we are pursuing a special interest in primitive navigation- see the Tami Canoe report in this issue. These unrecorded ways of seaborne life are in danger of passing from among us. We are proud to be associated with such people as Terry Linehan and " Spider" Anderson of the Tami adventure, and the film makers Sammy Low and Philip Teuscher, who have been among the dedicated crew who seek not only to record but to keep alive the traditions of primeval voyaging, the parent root from which the clipper Flying Cloud and rocket Voyager have sprung.

"Where is the Society these days?" I was asked again at a reception in the Pouch Terminal in Staten Island held to introduce SEA HISTORY 29. Well , our operating headquarters has moved to Croton-on-Hudson , some 45 miles north of New York , while we maintain a small office with the Masters, Mates, & Pilots in the city.