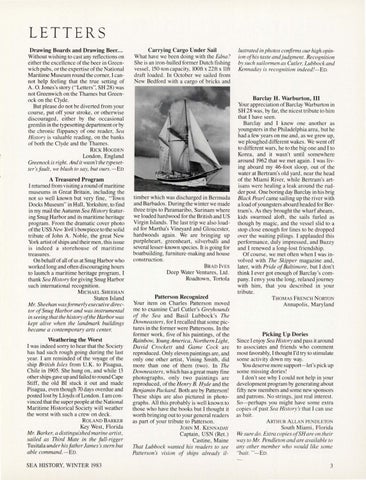 Without wishing to cast any reflections on either the excellence of the beer in Greenwich pubs, or the expert ise of the National Maritime Museum round the comer, I cannot help feeling that the true setting of A . 0 . Jones's story ("Lette rs", SH 28) was not Greenwich on the Thames but Greenock on the Clyde. But please do not be di verted from your course, put off your stroke, o r otherwise discouraged , either by the occasional gremlin in the typesetting department or by the chronic flipp ancy of one reader, Sea History is valuable reading, on the banks of both the Clyde and the Thames.

What have we been doing wi th the &Ina ? She is an iron-hulled fo rmer Dutch fis hing vessel, 150-ton capacity, lOOft x 22 ft x llft d raft loaded . In October we sailed from New Bedfo rd wi th a cargo of bricks and

London , England Greenock is right. And it wasn't the typesetter's fa ult, we blush to say, but ours.- ED

A Treasured Program I returned from visiting a round of maritime museums in Great Britain , including the not so well known but very fine, " Town Docks Museum" in Hull , Yorkshire, to find in my mail the Autumn Sea History featuring Snug Harbor and its maritime heritage program . From the dramatic cover photo of the USS New York 's bowpiece to the solid tribute of John A . Noble, the great New York artist of ships and their men, this issue is indeed a sto rehouse of ma ritime treasures. On behalf of all of us at Snug Harbor who worked long and often discouraging hours to launch a maritime heritage prog ram , I thank Sea History fo r giving Snug Harbor such international recognition. MICH AEL SH EEH A

Staten Island Mr. Sheehan was formerly executive director of Snug Harbor and was instrumental in seeing that the history ofthe Harbor was kept alive when the landmark buildings became a contemporary arts center.

Weathering the Worst I was indeed sorry to hear that the Society has had such rough going during the last year. I am reminded of the voyage of the ship British Isles from U.K . to Pisagua, Chile in 1905. She hung on, and while 13 other ships gave up and failed to round Cape Stiff, the old BI stuck it out and made Pisagua, even though 70 days overdue and posted lost by Lloyds of London. I am convinced that the super people at the National Maritime Historical Society will weather the wo rst with such a crew on deck. R OLAN D B ARKER

timber which was discharged in Bermuda and Barbados. During the winter we made three trips to Paramaribo, Surinam where we loaded hardwood fo r the British and US Virgin Islands. The last trip we also loaded for Martha's Vineyard and Gloucester, hardwoods again . We are bringing up purpleheart , greenheart , silverballi and several lesser-known species. It is going fo r boatbuilding, furniture-maki ng and house construction. B RAD IVES

Patterson Recognized Your item on Charles Patterson moved me to examine Carl Cutler's Greyhounds of the Sea and Bas il Lubbock's The Downeasters, fo r I recalled that some pictures in the fo rmer were Pattersons. In the fo rmer work , five of his paintings, of the Rainbow, Young America, No rthern Light, David Crockett and Game Cock a re reproduced . Only eleven paintings are, and only one other artist, Vi ning Smith , did mo re than one of them (two). In The Downeasters, which has a great many fin e photographs, o nl y two pai ntings are reproduced , of the Henry B. Hyde and the Benj amin Packard. Both are by Patterson! These ships are also pictured in photographs. All this probably is well known to those who have the books but I thought it wo rth bringi ng out to your general readers as part of your tri bute to Patterson. JOHN M. KENNADAY

lustrated in photos confirms our high opinion ofhis taste and judgment. Recognition by such sailormen as Cutler, Lubbock and Kennaday is recognition indeed !-ED.

Barclay H . Warburton , III Your appreciation of Barclay Warburton in SH 28 was , by fa r, the nicest tribute to him that I have seen. Barclay and I knew one anothe r as youngsters in the Philadelphia area , but he had a few years on me and , as we grew up, we pl oughed different wakes . We went off to different wa rs, he to the big one and I to Ko rea, and it wasn't until somewhere around 1962 that we met again . I was living aboard my 46-foot sloop, out of the water at Bert ram's old ya rd, near the head of the M iami Ri ver, while Bert ra m's artisans we re healing a leak around the rudder post. One boring day Barclay in his brig Black Pearl came sailing up the ri ver with a load of youngsters aboard headed fo r Bertram's. As they brought the wharf abeam , kids swarmed aloft , the sails furl ed as though by magic, and the vessel slid to a stop cl ose enough fo r lines to be dropped over the waiting pilings. I applauded thi s perfo rmance, duly impressed , and Buzzy and I renewed a long-lost fri endship. Of course, we met often when I was involved with The Skipper magazine and , late r, with Pride of Baltimore, but I don't think I ever got enough of Barclay 's company. I envy you the long, relaxed journey with him , that yo u described in yo ur tribute. THOMAS F RENCH NORTDN

Picking Up Dories Since I enjoy Sea History and pass it around to associates and fr iends who comment most favorably, I thought I'd try to stimulate some acti vity down my way. You deserve more support- let's pick up some miss ing dories! I don't see why I could not help in your development program by generating about fi fty new members and some new sponsors and patro ns. No strings , j ust real interest. So- perhaps you might have some extra copies of past Sea History's that I can use as bait. ARTHUR ALLAN PENDLETON

South Miami , Florida I# sure do. Extra copies ofSH are on their way to Mr. Pendleton and are available to any other member who would like some "bait . " -ED.