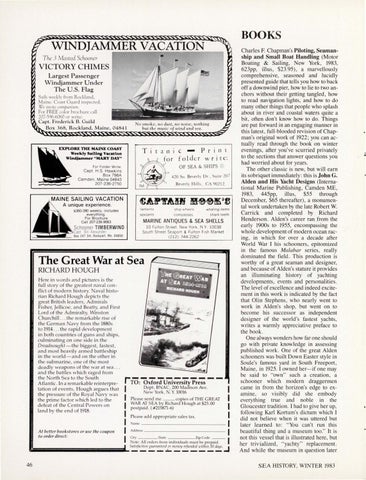 The Great War at Sea RICHARD HOUGH Here in wo rds a nd pictures is the full story of the grea tes t naval conflict of modern history. ava l hi storian Richard Hough depicts th e grea t British leaders, Admirals Fisher, Jellicoe, a nd Beatty, a nd First Lord of the Admiralty, Winston Churchill ... the remarkable rise of the Germa n avy from th e 1880s to 1914 ... th e rapid development in both countries of guns a nd ships, culminatin g on one side in th e Dreadnought-the bigges t, fa stest, and most heavil y armed battles hip in the world-and on th e other in the subma rine, one of the mos t deadl y weapons of the war at sea ... and the battles which ra ged from the North Sea to the South Atlantic. In a re marka ble reinterpretation of eve nts, Hough argues that the pressure of the Roya l avy was the prime factor which led to the defea t of th e Central Powe rs on land by the e nd of 1918.

At better bookstores or use tire coupon to order direct:

ate: All ord ers from individuals must be prepaid .

Charles F. Chapman&#39;s Piloting, Seamanship and Small Boat Handling (Motor Boating &amp; Sailing, New York, 1983, 623pp, illus, $23. 95), a marvellously comprehensive, seasoned and lucidly presented g uide that tells you how to back off a downwind pier, how to lie to two anchors without their getting tangled , how to read navigation lights, and how to do many other things that people who splash about in river and coastal waters quite a bit , often don &#39;t know how to do. Things are put fo rward in an engaging manner in this latest , full-blooded revision of Chapman&#39;s original work of 1922; you can actually read through the book o n winter evenings, after you&#39;ve scurried privately to the sections that answer questions you had worried about for years. The other classic is new, but wi ll earn its sobriquet immediately : this is John G. Alden and His Yacht Designs (International Marine Publishing, Camden ME , 1983, 445pp, illus, $55 through December, $65 thereafter) , a monumental work undertaken by the late Robert W. Carrick and completed by Richard Henderso n. Alden&#39;s career ran from the early 1900s to 1955, e ncompass ing the whole development of modern ocean racing, in which for over a decade after World War I his schooners , epitomized in the famous Malabar series, really dominated the fie ld . This production is worthy of a great seaman and designer, and because of Alden&#39;s stature it provides an illuminating history of yachting developments, events and personalities. The level of excellence and indeed excitement in this work is indicated by the fact that Olin Stephens, who nea rl y went to work in Alden&#39;s shop, but went on to become his successor as independent designer of the world &#39;s fastest yachts, writes a warmly appreciative preface to the book. · One al ways wonders how far one should go with private know ledge in assess ing published work . One of the great Alden schooners was built Down Easter style in Soule&#39;s famous yard in South Freeport , Maine, in 1925. I owned her-if one may be said to &quot;own&quot; such a creation , a schooner which modern draggermen came in from the horizon&#39;s edge to exam ine, so visi bl y did she embody everything true and noble in the Gloucester tradition . I had to give her up, following Karl Kortum&#39;s dictum which I did not believe when it was uttered but later learned to: &quot; You can&#39;t run this beautiful thing and a museum too.&quot; It is not this vessel that is illustrated here, but her trivialized , &quot;yachty &quot; replacement. And while the museum in question later