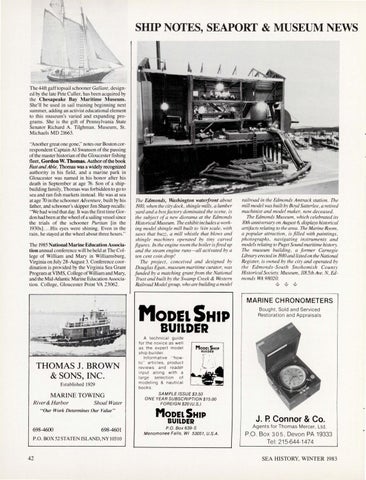 The44ft gaff topsai l schooner Gallant, designed by the late Pete Cu ll er, has been acquired by the Chesapeake Bay Maritime Museum. She&#39; ll be used in sail training beginning next summer, add ing an activist educational element to thi s museum&#39;s varied a nd ex panding programs. She is the gift of Pennsylvania State Senator Richard A . Tilghman. Museum , St. Michaels MD 21663. &quot;Another g reat one gone,&quot; notes our Boston correspondent Captai n Al Swanson of the passing of the master hi storian of the Gloucester fi shing fleet , Gordon W. T hom as. Authorofthe book Fast and Able, Thomas was a widely recogniz.ed authority in hi s field , and a marine park in G loucester was named in his honor after his death in September at age 76. Son of a shipbuilding fam ily, Thomas was forb idden to go to sea a nd ran fish markets instead. He was at sea at age 70 in the schooner Adventure, built by his futher, and schooner&#39;s skipper Jim Sharp recalls: &quot; We had wind that day. It was the first time Gordon had been at the wheel of a saili ng vessel since the tria ls of the schooner Puritan [in the 1930s] ... . His eyes were shining. Even in the rain , he stayed at the wheel about three hours.&quot; The 1985 National Marine Education Association annual conference will be he ld at The Col lege of William and Mary in Williamsburg, Virginia o n July 28- August 3. Conference coordinatio n is prov ided by the Virginia Sea Grant Program at VIMS, CoLlegeofWi lliam and Mary, and the Mid-Atlantic Marine Education Association. Coll ege, Gloucester Point VA 23062.