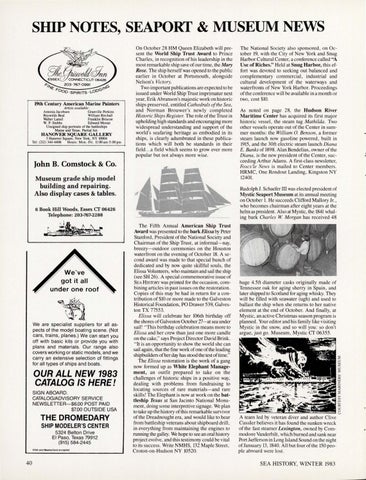 On October 28 HM Queen Elizabeth will present the World Ship Trust Award to Prince Charles, in recognition of hi s leadership in the most remarkable ship save of our time, the Mary Rose. The ship herself was opened to the public earlier in October at Portsmouth , alongside Nelson's Victory. Two important publications are expected to be issued under World Ship Trust imprimatur next year, Erik Abranson's majestic work on historic ships preserved , entitled Cathedrals ofthe Sea, a nd Norman Brouwer's newl y completed Historic Ships Register. The role of the Trust in upholding high standards and encouraging more widespread understanding a nd support of the world 's seafaring heritage as embodied in its ships, is clearly adumbrated in these publications which will both be standards in their field ... a fie ld which seems to grow ever more popular but not always more wise.

As noted on page 28, the H udson River Maritime Center has acquired its first major hi storic vessel , the steam tug Mathilda . Two other vessels operate out of the Center in summer months: the William 0. Benson, a former steam launch now gaso line powered, built in 1915, and the 30ft electric steam launch Diana E. Banks of 1898. Alan Bendelius, owner of the Diana , is the new president of the Center, succeeding Arthur Adams. A first-class newsletter, Foscs'le News is mail ed to Center members. HRMC, One Ro ndout Landing, Kingston NY 12401. Rudo lph 1. Schaefer ill was elected president of Mystic Seaport Museum at its annual meeting on October I. He succeeds Clifford Mallory Jr. , who becomes chairman after eight years at the helm as president. Also at Mystic, the 1841 whal ing bark Charles W Morgan has received 48

We are speci al ist su ppliers for a ll aspects of the m od~I boating sce ne . (Not cars, trains , planes.) We can start you off with bas ic kits or provide you with plans and materia ls. Our range also covers working or static models, and we carry an extensive selection of fittings for all types of ships and boats.

The National Society also sponsored , on October 19, with the City of New York and Snug Harbor Cultural Center, a conference called "A Use of R ich es." Held at Snug H a r bor, th is effort was devoted to seeking out balanced and complementary co mme rcial , ind ustrial and cultural development of the waterways and waterfronts of New York Harbor. Proceedings of the conference will be available in a month or two, cost $10.

The Fifth Annual American Ship Trust Award was presented to the bark Elissa by Peter Stanford , President of the National Society and Chairman of the Ship Tru st , at informal-nay, breezy-outdoor ceremonies o n the Houston waterfront on the evening of October 18. A second award was made to that special bunch of dedicated and by now quite skillful souls, the Elissa Volunteers, who maintain and sail the ship (see SH 26). A special commemorative issue of SEA HISlURY was printed for the occasion , combining articles in past issues o n the restoration. Copies of thi s may be had in return for a contribution of$10 or more made to the Galveston Historical Foundation , PO Drawer 539, Galveston TX 77553. Elissa will celebrate her 106th birthday off the shores of Galveston October 27-at sea under sai l! " This birthday celebration mea ns more to Elissa and her c rew than just one more candle on the cake,'' says Project Director David Brink . " It is a n opportunity to show the world she can sail again , that the fine work ofone of the leading shipbuilders of her day has stood the test ofome." The Elissa restoration is the work of a gang now formed up as W hite E le pha nt Managem ent, an outfit prepared to take on the challenges of historic ships in a positive way, dealing with problems from fundraising to locating sources of rare materials-and rare skills! The Elephant is now at work on the battleship Texas at San Jacinto National Monument , doing some interpretive signage. We plan to take up the history of this remarkable survivor of the Dreadnought era, and would like to hear from battleship veterans about shipboard drill , in everything from maintaining the engines to running the galley. We hope to see an oral history project evolve, and this testimony could be vital to its success. Write NMHS, 132 Maple Street, Croton-on-Hudson NY 10520.

huge 4.5ft diameter casks originally made of Tennessee oak fo r agi ng sherry in Spain, a nd later shipped to Scotland for ag ing whisky. They will be tilled with seawater (ugh) and used to ballast the ship when she returns to her native element at the end of October. And fi nall y, at Mystic, an active Christmas season program is planned . Your editor and his family like visiting Mystic in the snow, and so will you: so don't argue, just go. Museum , Mystic CT 06355.

A team led by veteran diver and author Clive Cussler believes it has found the sunken wreck of the fast steamer Lexington, owned by CommodoJre Vanderbilt , which burned and sank near Port J<efferson in Long Island Sound on the night ofJantuary 13, 1840. All but four of the ISO people ab)Qard were lost.