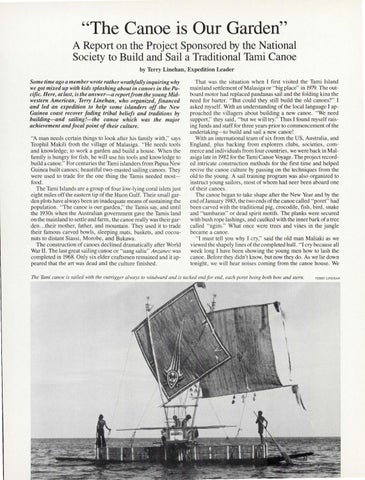 ''The Canoe is Our Garden'' A Report on the Project Sponsored by the National Society to Build and Sail a Traditional Tami Canoe by Terry Linehan, Expedition Leader Some time ago a member wrote rather wrathfully inquiring why we got mixed up with kids splashing about in canoes in the Pacific. Here, at last, is the answer-a report from the young Midwestern American, Terry Linehan, who organized, financed and led an expedition to help some islanders off the New Guinea coast recover fading tribal beliefs and traditions by building-and sailing!-the canoe which was the major achievement and focal point of their culture. "A man needs certain things to look after his family with," says Teophil Makili from the village of Malasiga. "He needs tools and knowledge; to work a garden and build a house. When the family is hungry for fish , he will use his tools and knowledge to build a canoe." For centuries the Tami islanders from Papua New Guinea built canoes; beautiful two-masted sailing canoes. They were used to trade for the one thing the Tamis needed mostfood . The Tami Islands are a group of four low-lying coral islets just eight miles off the eastern tip of the Hu on Gulf. Their small garden plots have always been an inadequate means of sustaining the population. "The canoe is our garden," the Tamis say, and until the 1930s when the Australian government gave the Tamis land on the mainland to settle and farm, the canoe really was their garden ... their mother, father, and mountain . They used it to trade their famous carved bowls, sleeping mats , baskets, and cocoanuts to distant Siassi, Morobe, and Bukawa. The construction of canoes declined dramatically after World War II . The last great sailing canoe or "uang saliu" Anzanec was completed in 1968. Only six elder craftsmen remained and it appeared that the art was dead and the culture finished.

That was the situation when I first visited the Tami Island mainland settlement ofMalasiga or "big place" in 1979. The outboard motor had replaced pandanas sail and the folding kina the need for barter. "But could they still build the old canoes?" I asked myself. With an understanding of the local language I approached the villagers about building a new canoe. "We need support," they said, " but we will try." Thus I found myself raising funds and staff for three years prior to commencement of the undertaking- to build and sail a new canoe! With an international team of six from the US, Australia, and England , plus backing from explorers clubs, societies, commerce and individuals from four countries, we were back in Malasiga late in 1982 for the Tami Canoe Voyage. The project recorded intricate construction methods for the first time and helped revive the canoe culture by passing on the-techniques from the old to the young. A sail training program was also organized to instruct young sailors, most of whom had neer been aboard one of their canoes. The canoe began to take shape after the New Year and by the end of January 1983, the two ends of the canoe called " poret" had been carved with the traditional pig, crocodile, fish , bird , snake and "tambaran" or dead spirit motifs. The planks were secured with bush rope lashings, and caulked with the inner bark of a tree called "ngim." What once were trees and vines in the jungle became a canoe. "I must tell you why I cry," said the old man Maliaki as we viewed the shapely lines of the completed hull. " I cry because all week long I have been showing the young men how to lash the canoe. Before they didn't know, but now they do. As we lie down tonight, we will hear noises coming from the canoe house. We

Th e Tami canoe is sailed with the outrigger always to windward and is tacked end for end, each porer being both bow and stern.