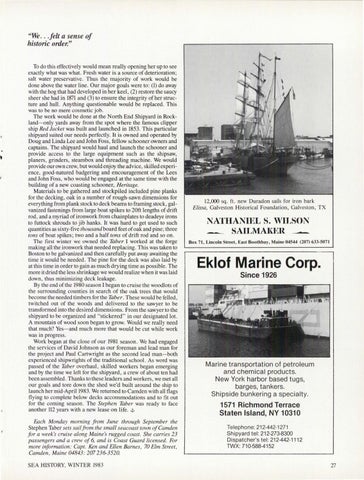 "We ... felt a sense of historic order." To do this effectively would mean really opening her up to see exactly what was what. Fresh water is a source of deterioration; salt water preservative. Thus the majority of work would be done above the water line. Our major goals were to : (1) do away with the hog that had developed in her keel, (2) restore the saucy sheer she had in 1871 and (3) to ensure the integrity of her structure and hull. Anything questionable would be replaced. This was to be no mere cosmetic job. The work would be done at the North End Shipyard in Rockland-only yards away from the spot where the famous clipper ship Red Jacket was built and launched in 1853. This particular shipyard suited our needs perfectly. It is owned and operated by Doug and Linda Lee and John Foss, fellow schooner owners and captains. The shipyard would haul and launch the schooner and provide access to the large equipment such as the shipsaw, planers, grinders, steambox and threading machine. We would provide our own crew, but would enjoy the advice, skilled experience, good-natured badgering and encouragement of the Lees and John Foss, who would be engaged at the same time with the building of a new coasting schooner, Heritage. Materials to be gathered and stockpiled included pine planks for the decking, oak in a number of rough-sawn dimensions for everything from plank stock to deck beams to framing stock, galvanized fastenings from large boat spikes to 20ft lengths of drift rod, and a myriad of ironwork from chainplates to deadeye irons to futtock shrouds to jib hanks. It was hard to get used to such quantities as sixty-five thousand board feet of oak and pine; three tons of boat spikes; two and a half tons of drift rod and so on. The first winter we owned the Taber I worked at the forge making all the ironwork that needed replacing. This was taken to Boston to be galvanized and then carefully put away awaiting the time it would be needed. The pine for the deck was also laid by at this time in order to gain as much drying time as possible. The more it dried the less shrinkage we would realize when it was laid down, thus minimizing deck leakage. By the end of the 1980 season I began to cruise the woodlots of the surrounding counties in search of the oak trees that would become the needed timbers for the Taber. These would be felled, twitched out of the woods and delivered to the sawyer to be transformed into the desired dimensions. From the sawyer to the shipyard to be organized and "stickered" in our designated lot. A mountain of wood soon began to grow. Would we really need that much? Yes-and much more that would be cut while work was in progress. Work began at the close of our 1981 season. We had engaged the services of David Johnson as our foreman and lead man for the project and Paul Cartwright as the second lead man-both experienced shipwrights of the traditional school. As word was passed of the Taber overhaul, skilled workers began emerging and by the time we left for the shipyard, a crew of about ten had been assembled . Thanks to these leaders and workers, we met all our goals and tore down the shed we'd built around the ship to launch her mid-April 1983. We returned to Camden with all flags flying to complete below decks accommodations and to fit out for the coming season . The Stephen Taber was ready to face another 112 years with a new lease on life. u,

Each Monday morning from June through September the Stephen Taber sets sail from the small seacoast town of Camden for a week's cruise along Maine's rugged coast. She carries 23 passengers and a crew of 6, and is Coast Guard licensed. For more information: Capt. Ken and Ellen Barnes, 70 Elm Street, Camden, Maine 04843: 207 236-3520. SEA HIS1DRY, WINTER 1983