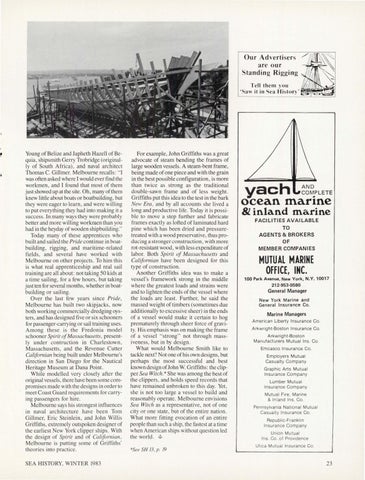 Young of Belize and Japheth Hazell of Bequia, shipsmith Gerry Trobridge (originally of South Africa) , and naval architect Thomas C. Gillmer. Melbourne recalls : " I was often asked where I would ever find the workmen, and I found that most of them just showed up at the site. Oh , many of them knew 1ittle about boats or boatbuilding, but they were eager to learn , and were willing to put everything they had into making it a success. In many ways they were probably better and more willing workmen than you had in the heyday of wooden shipbuilding." Today many of these apprentices who built and sailed the Pride continue in boatbuilding, rigging , and maritime-related fields, and several have worked with Melbourne on other projects . To him this is what real apprenticeship and real sail training are all about: not taking 50 kids at a time sailing, for a few hours, but taking just ten for several months, whether in boatbuilding or sailing. Over the last few years since Pride, Melbourne has built two skipjacks, now both working commercially dredging oysters, and has designed five or six schooners for passenger-carrying or sail training uses. Among these is the Fredonia model schooner Spirit of Massachusells, presently under contruction in Charlestown, Massachusetts , and the Revenue Cutter Californian being built under Melbourne's direction in San Diego for the Nautical Heritage Museum at Dana Point. While modelled very closely after the original vessels, there have been some compromises made with the designs in order to meet Coast Guard requirements for carrying passengers for hire. Melbourne says his strongest influences in naval architecture have been Tom Gillmer, Eric Steinlein, and John Willis Griffiths, extremely outspoken designer of the earliest New York clipper ships. With the desigrr of Spirit and of Californian, Melbourne is putting some of Griffiths' theories into practice. SEA HISTORY, WINTER 1983

For example, John Griffiths was a great advocate of steam bending the frames of large wooden vessels. A steam-bent frame, being made of one piece and with the grain in the best possible configuration , is more than twice as strong as the traditional doub le-sawn frame and of less weight. Griffiths put this idea to the test in the bark New Era, and by all accounts she lived a long and productive life. Today it is possible to move a step further and fabricate frames exactly as lofted of laminated hard pine which has been dried and pressuretreated with a wood preservative, thus producing a stronger construction, with more rot-resistant wood, with less expenditure of labor. Both Spirit of Massachuse11s and Californian have been designed for this type of construction. Another Griffiths idea was to make a vessel's framework strong in the middle where the greatest loads and strains were and to lighten the ends of the vessel where the loads are least. Further, he said the massed weight of timbers (sometimes due additionally to excessive sheer) in the ends of a vessel would make it certain to hog prematurely through sheer force of gravity. His emphasis was on making the frame of a vessel "strong" not through massiveness, but in by design. What would Melbourne Smith like to tackle next? Not one of his own designs, but perhaps the most successful and best known design of John W. Griffiths: the clipper Sea Witch.* She was among the best of the clippers, and holds speed records that have remained unbroken to this day. Yet , she is not too large a vessel to build and reasonably operate. Melbourne envisions Sea Witch as a representative, not of one city or one state, but of the entire nation. What more fitting evocation of an entire people than such a ship, the fastest at a time when American sh ips without question led the world. w *See SH 13, p. 19