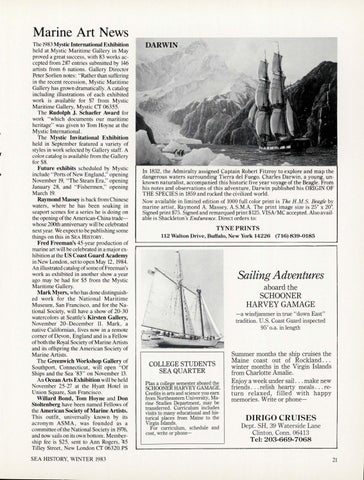 Marine Art News The 1983 Mystic International Exhibition held at Mystic Maritime Gallery in May proved a great success, with 83 works accepted from 2'if7 entries submitted by 146 artists from 6 nations. Gallery Director Peter Sorlien notes: " Rather than suffering in the recent recession , Mystic Maritime Gallery has grown dramatically. A catalog including illustrations of each exhibited work is available for P from Mystic Maritime Gallery, Mystic CT 06355. The Rudolph J. Schaefer Award for work "which documents our maritime heritage" was given to Tom Hoyne at the Mystic International. The Mystic Invitational Exhibition held in September featured a variety of styles in work selected by Gallery staff. A color catalog is available from the Gallery for $8. Future exhibits scheduled by Mystic include " Ports of New England ," opening November 19, "The Steam Era," opening January 28, and " Fishermen ," opening March 19. Raymond Massey is back from Chinese waters , where he has been soaking in seaport scenes for a series he is doing on the opening of the American-China tradewhose 200th anniversary will be celebrated next year. We expect to be publishing some things on this in SEA HISTORY . Fred Freeman's 45-year production of marine art will be celebrated in a major exhibition at the US Coast Guard Academy in New London , set to open May 12 , 1984. An illustrated catalog of some of Freeman's work as exhibited in another show a year ago may be had for $5 from the Mystic Maritime Gallery. Mark Myers, who has done distinguished work for the National Maritime Museum , San Francisco, and for the National Society, will have a show of 20-30 watercolors at Seattle's Kirsten Gallery, November 20-December II. Mark , a native Californian , lives now in a remote corner of Devon , England and is a Fellow of both the Royal Society of Marine Artists and its offspring the American Society of Marine Artists. The Greenwich Workshop Gallery of Southport , Connecticut, will open " Of Ships and the Sea '83" on November 13. An Ocean Arts Exhibition will be held November 25-Yl at the Hyatt Hotel in Union Square, San Francisco. Willard Bond, Tom Hoyne and Don Stoltenberg have been named Fellows of the American Society of Marine Artists. This outfit, universally known by its acronym ASMA , was founded as a committee of the National Society in 1976, and now sails on its own bottom . Membership fee is $25, sent to Ann Rogers, ~5 Tilley Street , New London CT 06320. PS SEA HISTORY, WINTER 1983

In 1832, the Admiralty assigned Captain Robert Fitzroy to explore and map the dangerous waters surrounding Tierra def Fuego. Charles Darwin, a young, unknown naturalist, accompanied this historic five year voyage of the Beagle. From his notes and observations of this adventure, Darwin published his ORIGIN OF THE SPECIES in 1859 and rocked the civilized world . Now available in limited edition of 1000 full color print is Th e H.M.S. Beagle by marine artist, Ra ymond A. Massey, A.S.M.A. The print image size is 25" x 20". Signed print$75 . Signed and remarqued print$125 . VISA/ MC accepted. Also available is Shackleton's Endurance. Direct orders to:

COLLEGE STUDENTS SEA QUARTER Plan a college semester aboard the SCHOONER HARVEY GAMAGE. Credits in arts and science you earn from Northeastern University, Marine Studies Department, may be transferred. Curriculum includes visits to many educational and historical places from Maine to the Virgin Islands. For curriculum, schedule and cost, write or phone-