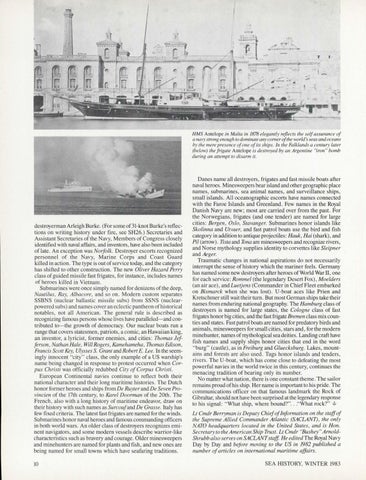 r-91~ ,....---HMS Antelope in Malta in 18&#39;78 elegantly reflects the self assurance of a nary strong enough to dominate any comer ofthe world&#39;s seas and oceans by the mere presence of one of its ships. In the Falklands a century later (below) the frigate Antelope is destroyed by an Argentine &quot;iron &quot; bomb during an attempt to disarm it.

destroyerman Arleigh Burke. (For some of31-knot Burke&#39;s reflections on writing history under fire, see SH26.) Secretaries and ~ssi~tant S~cretaries of the Navy, Members of Congress closely identified with naval affairs, and inventors, have also been included of late. An exception was Norfolk. Destroyer escorts recognized personnel of the Navy, Marine Corps and Coast Guard killed action. The type is out of service today, and the category has shifted to other construction. The new Oliver Hazard Perry class of guided missile fast frigates, for instance, includes names of heroes killed in Vietnam. Submarines were once simply named for denizens of the deep Nautilus, Ray, Albacore, and so on. Modern custom separate~ SSBNS (nuclear ballastic missile subs) from SSNS (nuclearpowered subs) and names cover an eclectic pantheon of historical notables, not all American . The general rule is described as recognizing famous persons whose lives have paralleled-and contributed to-the growth of democracy. Our nuclear boats run a ran~e that covers ~~tesmen, patriots, a comic, an Hawaiian king, an inventor, a lyricist, former enemies, and cities: Thomas Jefferson, Nathan Hale, Will Rogers, Kamehameha, Thomas F.dison, Francis Scott Key, Ulysses S. Grant and Robert E. Lee. In the seemingly innocent &quot;city&quot; class, the only example of a US warship&#39;s name being changed in response to protest occurred when Corpus Christi was officially redubbed City of Corpus Christi. European Continental navies continue to reflect both their national character and their long maritime histories. The Dutch honor former heroes and ships from De Ruyter and De Seven Provincien of the 17th century, to Karel Doorman of the 20th. The French, also with a long history of maritime endeavor draw on their history with such names as Surcoufand De Grasse&#39;. Italy has few fixed criteria. The latest fast frigates are named for the winds. ~ubmarines honor naval heroes and famous commanding officers in both ~orld wars. An older class of destroyers recognizes eminent navigators, and some modern vessels describe warrior-like characteristics such as bravery and courage. Older minesweepers an~ minehunters are named for plants and fish, and new ones are being named for small towns which have seafaring traditions.

Danes name all destroyers, frigates and fast missile boats after naval heroes. Minesweepers bear island and other geographic place names_, submarines, sea animal names, and surveillance ships, small islands. All oceanographic escorts have names connected with. the Faroe Islands and Greenland. Few names in the Royal Danish Navy are new; most are carried over from the past. For t~~ Norwegians, frigates (and one tender) are named for large cities : Bergen, Oslo, Stavanger. Submarines honor islands like Skolinna and Utvaer, and fast patrol boats use the bird and fish category in addition to antique projectiles: Hauk, Hai (shark), and Pil (arrow). Ttsta and Tona are minesweepers and recognize rivers, and Norse mythology supplies identity to corvettes like Sleipner and Aeger. . Traumatic changes in national aspirations do not necessarily interrupt the sense of history which the mariner feels. Germany has named some new destroyers after heroes of World War II one for each service: Rommel (the legendary Desert Fox), Moelders (an air ace), and Luetjens (Commander in Chief Fleet embarked on Bismarck when she was lost). U-boat aces like Prien and Kretschmer still wait their tum. But most German ships take their names from enduring national geography. The Hamburg class of destroyers is named for large states, the Cologne class of fast frigates honor big cities, and the fast frigate Bremen class mix counties and states. Fast patrol boats are named for predatory birds and animals, minesweepers for small cities, stars and, for the modem minehunter, names of mythological sea deities. Landing craft have fish names and supply ships honor cities that end in the word &quot;burg&quot; (castle), as in Freiburg and Gluecksburg. Lakes, mountains and forests are also used. Tugs honor islands and tenders, nvers. The U-boat, which has come close to defeating the most powerful navies in the world twice in this century, continues the menacing tradition of bearing only its number. No matter what nation, there is one constant theme.The sailor remains proud of his ship. Her name is important to his pride. The communications officer on that famous landmark the Rock of Gibraltar, should not have been surprised at the legendary response to his signal: &quot;What ship, where bound?&quot;...&quot;What rock?&quot; .t Lt Cmdr Berryman is Deputy Chief of Information on the staff of the Supreme Allied Commander Atlantic (SACLANT), the only NATO headquarters located in the United States, and is Hon. Secretary to the American Ship Trust. Lt Cmdr &quot;Bushey&quot; ArnoldShrubb also serves on SACLANT staff He edited The Royal Navy Day by Day and before moving to the US in 1982 published a number of articles on international maritime affairs.