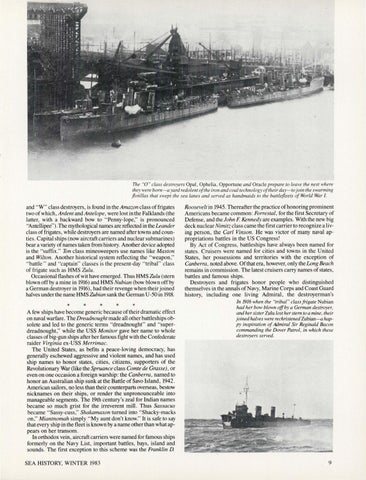 Th e &quot;O&quot; class destroyers Opal , Ophelia , Opportune and Oracle prepare to leave the nest where they were born-a yard redo/em ofth e iron and coal technologyofth eirday-to join the swarming flot illas that swept the sea lanes and served as handmaids to th e battlejleets of World War I.

and &quot; W&quot; class destroyers, is found in the Amazan class of frigates two of which, Ardent and Antelope, were lost in the Falklands (the latter, with a backward bow to &quot; Penny-lope,&quot; is pronounced &quot;A ntellipee~ &#39;). The mythological names are reflected in the Leander class of frigates, while destroyers are named after towns and counties. Capital ships (now aircraft carriers and nuclear submarines) bear a variety of names taken from history. Another device adopted is the &quot;suffix .&quot; Ton class minesweepers use names like Maxton and Wilton. Another historical system reflecting the &quot; weapon ,&quot; &quot; battle&quot; and &quot;captai n&quot; classes is the present-day &quot; tribal &quot; class of frigate such as HMS Zulu. Occasional flashes of wit have emerged. Thus HMS Zulu (stem blown off by a mine in 1916) and HMS Nubian (bow blown off by a German destroyer in 1916), had their revenge when their joined halves under the name HMS Zubian sank the German U-50 in 1918.

A few ships have become generic because of their dramatic effect on naval warfare. The Dreadnought made all other battleships obsolete and led to the generic terms &quot;dreadnought&quot; and &quot;superdreadnought ,&quot; while the USS Monitor gave her name to whole classes of big-gun ships after her famous fight with the Confederate raider Virginia ex-USS Merrimac. The United States, as befits a peace-loving democracy, has generally eschewed aggressive and violent names, and has used ship names to honor states, cities, citizens, supporters of the Revolutionary War (like the Spruance class Comte de Grasse) , or even on one occasion a foreign warship : the Canberra, named to honor an Australian ship sunk at the Battle of Savo Island , 1942 . American sailors, no less than their counterparts overseas, bestow nicknames on their ships, or render the unpronounceable into manageable segments. The 19th century&#39;s zeal for Indian names became so much grist for the irreverent mill . Thus Sassacus became &quot; Sassy-cuss,&quot; Shaknmaxon turned into &quot; Shacky-macks on,&quot; Miantn omah simply &quot; My aunt don&#39;t know.&quot; It is safe to say that every ship in the fleet is known by a name other than what appears on her transom. In orthodox vein , aircraft carriers were named for famous ships formerly on the Navy List, important battles, bays, island and sounds. The first exception to this scheme was the Franklin D. SEA HISTORY, WINTER 1983

Roosevelt in 1945. Thereafter the practice of honoring prominent Americans became common: Forrestal, for the first Secretary of Defense, and the John F. Kennedy are examples. With the new big deck nuclear Nimitz class came the first carrier to recognize a living person , the Carl Vinson. He was victor of many naval appropriations battles in the US Congress! By Act of Congress, battleships have always been named for states. Cruisers were named for cities and towns in the United States, her possessions and territories with the exception of Canberra, noted above. Of that era , however, only the Long Beach remains in commission . The latest cruisers carry names of states, battles and famous ships. Destroyers and frigates honor people who distinguished themselves in the annals of Navy, Marine Corps and Coast Guard history, including one living Admiral , the destroyerman&#39;s ln 1916 when the &quot;tribal&quot; class frigate Nubian had her bow blown off by a German destroyer, and her sister Zulu lost her stem to a mine, their joined halves were rechristened Zubian-a happy inspiration of Admiral Sir Reginald Bacon commanding the Dover Patrol, in which these destroyers served.