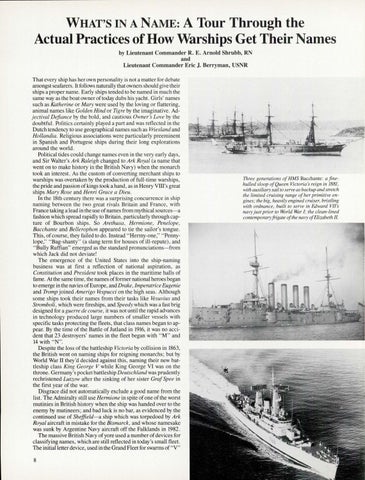 WHAT&#39;S IN A NAME: A Tour Through the Actual Practices of How Warships Get Their Names by Lieutenant Commander R. E. Arnold Shrubb, RN and Lieutenant Commander Eric J. Berryman, USNR That every ship has her own personality is not a matter for debate amongst seafarers. It follows naturally that owners should give their ships a proper name. Early ships tended to be named in much the same way as the boat owner of today dubs his yacht. Girls&#39; names such as Katherine or Mary were used by the loving or flattering, animal names like Golden Hind or Tigre by the imaginative. Adjectival Defiance by the bold , and cautious Owner &#39;s love by the doubtful. Politics certainly played a part and was reflected in the Dutch tendency to use geographical names such as Vries land and Hollandia . Religious associations were particularly preeminent in Spanish and Portugese ships during their long explorations around the world. Political tides could change names even in the very early days, and Sir Walter&#39;s Ark Raleigh changed to Ark Royal (a name that went on to make history in the British Navy) when the monarch took an interest. As the custom of converting merchant ships to warships was overtaken by the production of full-time warships, the pride and passion of kings took a hand , as in Henry VIII&#39;s great ships Mary Rose and Henri Grace a Dieu. fo the 18th century there was a surprising concurrence in ship naming between the two great rivals Britain and France, with France taking a lead in the use of names from mythical sources-a fashion which spread rapidly to Britain, particularly through capture of Bourbon ships. So Arethusa, Hermione, Penelope, Bacchante and Bellerophon appeared to tie the sailor&#39;s tongue. This, of course, they failed to do. Instead &quot; Hermy-one,&quot; &quot;Pennylope,&quot; &quot; Bag-shanty&quot; (a slang term for houses of ill-repute), and &quot;Bully Ruffian&quot; emerged as the standard pronunciations-from which Jack did not deviate! The emergence of the United States into the ship-naming business was at first a reflection of national aspiration , as Constitution and President took places in the maritime halls of fame. At the same time, the names of former national heroes began to emerge in the navies of Europe, and Drake, Imperatrice Eugenie and Tromp joined Amerigo 1-espucci on the high seas. Although some ships took their names from their tasks like 1-esuvius and Stromboli, which were fireships, and Speedy which was a fast brig designed for a guerre de course, it was not until the rapid advances in technology produced large numbers of smaller vessels with specific tasks protecting the fleets , that class names began to appear. By the time of the Battle of Jutland in 1916, it was no accident that 23 destroyers&#39; names in the fleet began with &quot;M&quot; and 14 with &quot;N&quot;. Despite the loss of the battleship Victoria by collision in 1863, the British went on naming ships for reigning monarchs; but by World War II they&#39;d decided against this, naming their new battleship class King George V while King George VI was on the throne. Germany&#39;s pocket battleship Deutsch/and was prudently rechristened Lutzow after the sinking of her sister Graf Spee in the first year of the war. Disgrace did not automatically exclude a good name from the list. The Admiralty still use Hermione in spite of one of the worst mutinies in British history when the ship was handed over to the enemy by mutineers ; and bad luck is no bar, as evidenced by the continued use of Sheffield-a ship which was torpedoed by Ark Royal aircraft in mistake for the Bismarck, and whose namesake was sunk by Argentine Navy aircraft off the Falklands in 1982 . The massive British Navy of yore used a number of devices for classifying names, which are still reflected in today&#39;s small fleet. The initial letter device, used in the Grand Fleet for swarms of &quot;V&quot; 8

Three generations of HMS Bacchante: a finehulled sloop of Queen Victoria &#39;.s reign in 1881, with auxiliary sail to serve as backup and stretch the limited cruising range of her primitive engines; the big , heavily engined cruiser, bristling with ordnance, built to serve in &amp;lward Vl/&#39;s navy just prior to World War l; the clean-lined contemporary frigate ofthe navy of Elizabeth ll.