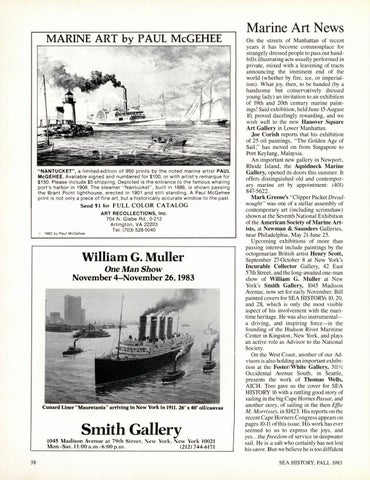 " NANTUCKET'', a limited-edition of 950 prints by the noted marine artist PAUL McGEHEE. Available signed and numbered for $100, or with artist's remarque for $150 . Please include $5 shipping . Depicted is the entrance to the famous whaling port ' s harbor in 1908. The steamer " Nantucket" , built in 1886, is shown passing the Brant Poi nt lig hthouse , erected in 1901 and still standing . A Paul McGehee print is not only a piece of fine art, but a historically accurate window to the past. Send $1 for FULL COLOR CATALOG

Marine Art News On the streets of Manhattan of recent years it has become commonplace for strangely dressed people to pass out handbills illustrating acts usually performed in private, mixed with a leavening of tracts announcing the imminent end of the world (whether by fire, ice, or imperialism) . What joy, then , to be handed (by a handsome but conservatively dressed young lady) an invitation to an exhibition of 19th and 20th century marine paintings! Said exhibition , held June 15-August 10, proved dazzlingly rewarding, and we wish well to the new Hanover Square Art Gallery in Lower Manhattan . Joe Corish reports that his exhibition of 25 oil paintings, " The Golden Age of Sail ," has moved on from Singapore to Port Keylang, Malaysia. An important new gallery in Newport, Rhode Island, the Aquidneck Marine Gallery, opened its doors this summer. It offers distinguished old and contemporary marine art by appointment: (401) 847-5622. Mark Greene's "Clipper Packet Dreadnought" was one of a stellar assembly of contemporary art (including scrimshaw) shown at the Seventh National Exhibition of the American Society of Marine Artists, at Newman & Saunders Galleries , near Philadelphia , May 21-June 25. Upcoming exhibitions of more than passing interest include paintings by the octogenarian British artist Henry Scott, September 27-0ctober 8 at New York's Incurable Collector Gallery, 42 East 57th Street, and the long-awaited one-man show of William G. Muller at New York's Smith Gallery, 1045 Madison Avenue, now set for early November. Bill painted covers for SEA HISTORYs 10, 20, and 28, which is only the most visible aspect of his involvement with the maritime heritage. He was also instrumentala driving , and inspiring force-in the founding of the Hudson River Maritime Center in Kingston , New York , and plays an active role as Advisor to the National Society. On the West Coast, another of our Advisors is also holding an important exhibition at the Foster/White Gallery, 311 V2 Occidental Avenue South, in Seattle, presents the work of Thomas Wells, AICH. Tom gave us the cover for SEA HISTORY 16 with a rattling good story of sailing in the big Cape Horner Passat, and another story, of sailing in the then-Effie M. Morrissey, in SH23. His reports on the recent Cape Horne rs Congress appears on pages 10-11 of this issue. His work has ever seemed to us to express the joys, and yes ... the f reedom of service in deepwater sail . He is. a salt who certainly has not lost his savor. But we believe he is too diffident SEA HIS1DRY, FALL 1983