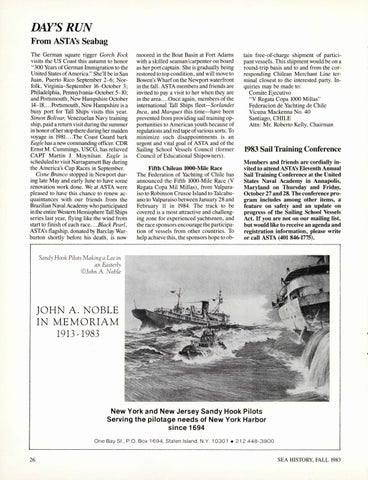 DAY'S RUN From ASTA's Seabag The German square rigger Gorch Fock visits the US Coast this autumn to honor "300 Years of German Immigration to the United States of America." She'll be in San Juan , Puerto Rico September 2-6 ; Norfolk , Virginia-September 16-0ctober 3; Philadelphia , Pennsylvania- October 5-10; and Portsmouth , New Hampshire October 14-18.... Portsmouth , New Hampshire is a busy port for Tall Ships visits this year. Simon Bolivar, Venezuelan Navy training ship, paid a return visit during the summer in honor of her stop there during her maiden voyage in 1981. ...The Coast Guard bark Eagle has a new commanding officer. CDR Ernst M. Cummings, USCG, has relieved CAPT Martin J. Moynihan . Eagle is scheduled to visit Narragansett Bay during the America's Cup Races in September. Cisne Branco stopped in Newport during late May and early June to have some renovation work done. We at ASTA were pleased to have this chance to renew acquaintances with our friends from the Brazilian Naval Academy who participated in the entire Western Hemisphere Tall Ships series last year, flying like the wind from start to finish of each race ... .Black Pearl , ASTA's flagship, donated by Barclay Warburton shortly before his death , is now

moored in the Boat Basin at Fort Adams with a skilled seaman/carpenter on board as her port captain. She is gradually being restored to top condition , and will move to Bowen's Wharf on the Newport waterfront in the fall. ASTA members and friends are invited to pay a visit to her when they are in the area ... .Once again, members of the international Tall Ships fleet-Sorlandet Inca , and Marques this time-have been prevented from providing sail training opportunities to American youth because of regulations and red tape of various sorts. To minimize such disappointments is an urgent and vital goal of ASTA and of the Sailing School Vessels Council (former Council of Educational Shipowners).

Fifth Chilean 1000-Mile Race The Federation of Yachting of Chile has announced the Fifth 1000-Mile Race (V Regata Copa Mil Millas), from Valparaiso to Robinson Crusoe Island to Talcahuano to Valparaiso between January 28 and February 11 in 1984. The track to be covered is a most attractive and challenging zone for experienced yachtsmen , and the race sponsors encourage the participation of vessels from other countries. To help achieve this, the sponsors hope to ob-

tain free-of-charge shipment of participant vessels . This shipment would be on a round-trip basis and to and from the corresponding Chilean Merchant Line terminal closest to the interested party. Inquiries may be made to : Comite Ejecutivo "V Regata Copa 1000 Millas" Federacion de Yachting de Chile Vicuna Mackenna No. 40 Santiago, CHILE Attn: Mr. Roberto Kelly, Chairman

1983 Sail Training Conference Members and friends are cordially invited to attend ASTA's Eleventh Annual Sail Training Conference at the United States Naval Academy in Annapolis, Maryland on Thursday and Friday, October 27 and 28. The conference program includes among other items, a feature on safety and an update on progress of the Sailing School Vessels Act. If you are not on our mailing list, but would like to receive an agenda and registration information, please write or call ASTA (401 846-1775).

Sandy Hook Pilots Making a Lee in an Easterly ÂŠJohn A. Noble