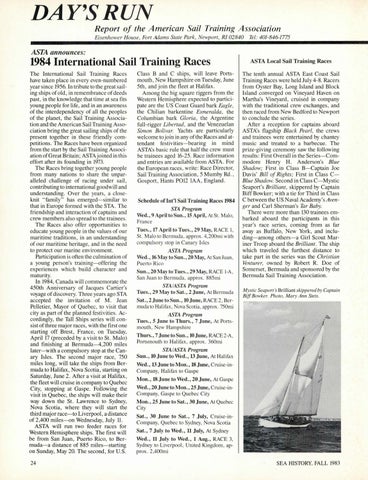 1984 International Sail Training Races The International Sail Training Races have taken place in every even-numbered year since 1956. In tribute to the great sailing ships of old , in remembrance of deeds past , in the knowledge that time at sea fits young people for life, and in an awareness of the interdependency of all the peoples of the planet, the Sail Training Association and the American Sail Training Association bring the great sailing ships of the present together in these friendly competitions. The Races have been organized from the start by the Sail Training Association of Great Britain; ASTA joined in this effort after its founding in 1973. The Races bring together young people from many nations to share the unparalleled challenge of racing under sail , contributing to international goodwill and understanding. Over the years, a closeknit &quot;family&quot; has emerged-similar to that in Europe formed with the STA. The friendship and interaction of captains and crew members also spread to the trainees. The Races also offer opportunities to educate young people in the values of our maritime traditions , in an understanding of our maritime heritage, and in the need to protect our marine environment. Participation is often the culmination of a you ng person&#39;s training-offering the experiences which build character and maturity. In 1984, Canada will commemorate the 450th Anniversary of Jacques Cartier&#39;s voyage of discovery. Three years ago STA accepted the invitation of M . Jean Pelletier, Mayor of Quebec, to visit that city as part of the pfanned festivities. Accordingly, the Tall Ships series will consist of three major races , with the first one starting off Brest, France, on Tuesday, April 17 (preceded by a visit to St. Malo) and finishing at Bermuda-4,200 miles later-with a compulsory stop at the Canary Isles. The second major race, 750 miles long, will take the ships from Bermuda to Halifax , Nova Scotia, starting on Saturday, June 2. After a visit at Halifax, the fleet will cruise in company to Quebec City, stopping at Gaspe. Following the visit in Quebec, the ships will make their way down the St. Lawrence to Sydney, Nova Scotia, where they will start the third major race-to Liverpool, a distance of 2 ,400 miles-on Wednesday, July 11. ASTA will run two feeder races for Western Hemisphere ships. The first will be from San Juan , Puerto Rico, to Bermuda-a distance of 885 miles-starting on Sunday, May 20. The second, for U.S . 24

Class B and C ships, will leave Portsmouth, New Hampshire on Tuesday, June 5th, and join the fleet at Halifax . Among the big square riggers from the Western Hemisphere expected to participate are the US Coast Guard bark Eagle, the Chilian barkentine Esmeralda, the Columbian bark Gloria , the Argentine full-rigger Libertad, and the Venezuelan Simon Bolivar. Yachts are particularly welcome to join in any of the Races and attendant festivities-bearing in mind ASTA&#39;s basic rule that half the crew must be trainees aged 16-25. Race information and entries are available from ASTA. For the European races, write: Race Director, Sail Training Association , 5 Mumby Rd ., Gosport, Hants P012 lAA , England.

ASTA Local Sail Training Races The tenth annual ASTA East Coast Sail Training Races were held July 4-8. Racers from Oyster Bay, Long Island and Block Island converged on Vineyard Haven on Martha&#39;s Vineyard, cruised in company with the traditional crew exchanges, and then raced from New Bedford to Newport to conclude the series. After a reception for captains aboard ASTA&#39;s flagship Black Pearl, the crews and trainees were entertained by chantey music and treated to a barbecue. The prize-giving ceremony saw the fo llowing results: First Overall in the Series-Commodore Henry H . Anderson&#39;s Blue Shadow; First in Class B-Captain Joe Davis&#39; Bill of Rights; First in Class CBlue Shadow. Second in Class C-Mystic Seaport&#39;s Brilliant, skippered by Captain BiffBowker; with a tie for Third in Class C between the US Naval Academy &#39;s Avenger and Carl Sherman&#39;s Tar Baby. There were more than 130 trainees embarked aboard the participants in this year&#39;s race series, coming from as far away as Buffalo, New York, and including-among others-a Girl Scout Mariner Troop aboard the Brilliant. The ship which traveled the furthest distance to take part in the series was the Christian ~nturer, owned by Robert R. Doe of Somerset, Bermuda and sponsored by the Bermuda Sail Training Association . Mystic Seaport&#39;s Brilliant skippered by Captain Biff Bowker. Photo, Ma ry Ann Stets.