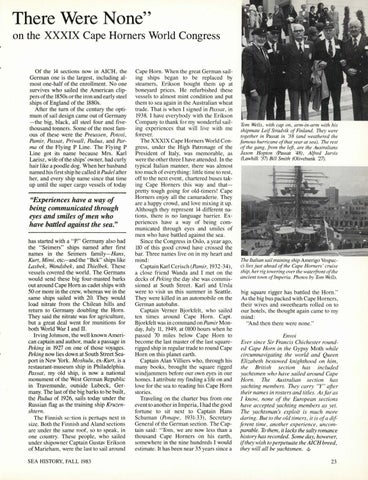 There Were None'' on the XXXIX Cape Horners World Congress

Of the 14 sections now in AICH, the German one is the largest, including almost one-half of the enrollment. No one survives who sailed the American clippers of the 1850s or the iron and early steel ships of England of the 1880s. After the turn of the century the optimum of sail design came out of Germany -the big, black, all steel four and fivethousand tonners. Some of the most famous of these were the Preussen , Potosi, Pamir, Passat, Priwall, Padua, and Parma of the Flying P Line. The Fiying P Line got its name because Mrs. Karl Laeisz, wife of the ships' owner, had curly hair like a poodle dog. When her husband named his first ship he called it Pudel after her, and every ship name since that time up until the super cargo vessels of today

"Experiences have a way of being communicated through eyes and smiles of men who have battled against the sea." has started with a " P." Germany also had the "Seimers" ships named after first names in the Seimers family-Hans, Kurt, Mimi , etc,-and the " Bek" ships like Lasbek, Wandsbek, and Thielbek. These vessels covered the world . The Germans would send these big four-masted barks out around Cape Horn as cadet ships with 50 or more in the crew, whereas we in the same ships sailed with 20. They would load nitrate from the Chilean hills and return to Germany doubling the Horn. They said the nitrate was for agriculture, but a great deal went for munitions for both World War I and II. Irving Johnson , the well known American captain and author, made a passage in Peking in 19Z7 on one of those voyages. Peking now lies down at South Street Seaport in New York. Moshulu, ex-Kurt, is a restaurant-museum ship in Philadelphia . Passat, my old ship, is now a national monument of the West German Republic in Travemunde, outside Lubeck, Germany. The last of the big barks to be built , the Padua of 1926, sails today under the Russian flag as the training ship Kruzenshtern. The Finnish se~ tion is perhaps next in size. Both the Finnish and Aland sections are under the same roof, so to speak , in one country. These people, who sailed under shipowner Captain Gustav Erikson of Marieham , were the last to sail around SEA HISTORY, FALL 1983

Cape Horn . When the great German sailing ships began to be replaced by steamers, Erikson bought them up at boneyard prices. He refurbished these vessels to almost mint condition and put them to sea again in the Australian wheat trade. That is when I signed in Passat , in 1938. I have everybody with the Erikson Company to thank for my wonderful sailing experiences that will live with me forever. The XXXIX Cape Homers World Congress, under the High Patronage of the President of Italy, was memorable, as were the other three I have attended . In the typical Italian manner, there was almost too much of everything: little time to rest, off to the next event, chartered buses taking Cape Homers this way and thatpretty tough going for old-timers! Cape Homers enjoy all the camaraderie. They are a happy crowd , and love mixing it up. Although they represent 14 different nations, there is no language barrier. Experiences have a way of being communicated through eyes and smiles of men who have battled against the sea. Since the Congress in Oslo, a year ago, 110 of this good crowd have crossed the bar. Three names live on in my heart and mind : Captain Karl Cerisch (Pamir, 1932-34) , a close friend Wanda and I met on the decks of Peking the day she was commissioned at South Street. Karl and Ursla were to visit us this summer in Seattle. They were killed in an automobile on the German autobahn . Captain Verner Bjorkfelt, who sailed ten times arou nd Cape Horn . Capt. Bjorkfelt was in command on Pamir Monday, July 11, 1949, at 0100 hours when he passed 70 miles below Cape Horn to become the last master of the last squarerigged ship in regular trade to round Cape Horn on this planet earth. Captain Alan Villiers who, through his many books, brought the square rigged windjammers before our own eyes in our homes. I attribute my finding a life on and love for the sea to reading his Cape Horn stories. Traveling on the charter bus from one event to another in Imperia, I had the good fortune to sit next to Captain Hans Schuman (Ponape , 1931-33) , Secretary General of the German section . The Captain said : " Tom , we are now less than a thousand Cape Homers on his earth , somewhere in the nine hundreds I would estimate. It has been near 35 years since a

Tom IM!lls , with cap on, arm-in-arm with his shipmate Leif Stradvik of Finland. They were together in Passat in '38 (and weathered the famous hurricane of that year at sea). The rest of the gang, from the left, are the Australians Jason Hopton (Passat '48), Alfred Jarvis (Lawhill '37) Bill Smith (Olivebank 27) .

big square rigger has battled the Horn ." As the big bus packed with Cape Homers, their wives and sweethearts rolled on to our hotels, the thought again came to my mind: "And then there were none."

Envoi Ever since Sir Francis Chichester rounded Cape Horn in the Gypsy Moth while circumnavigating the world and Queen Elizabeth bestowed knighthood on him, the British section has included yachtsmen who have sailed around Cape Horn. The Australian section has yachting members. They carry "Y" after their names in rosters and titles. As far as I know, none of the European sections have accepted yachting members as yet. The yachtsman's exploit is much more daring. But to the old timers, it is of a dif ferent time, another experience, uncomparable. To them, it lacks the salty romance history has recorded. Some day, however, ifthey wish to perpetuate the A/CH breed, they will all be yachtsmen. w 23