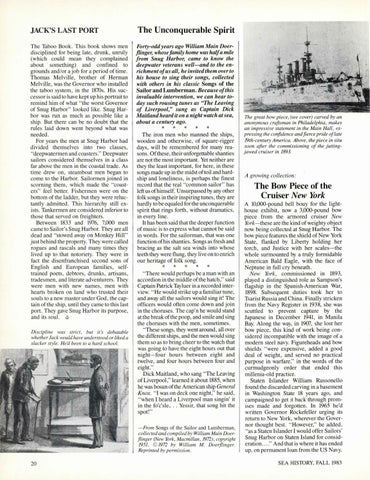 T he Taboo Book. T his book shows men disci pl ined for being late, drunk, unruly (which could mean they complained about something) and confined to grounds and/or a job fo r a period of time. Thomas Melville, brother of Herman Melville, was the Governor who installed the taboo system , in the 1870s. His successor is said to have kept up his portra it to remind hi m of what "the worst Governor of Snug Harbor" looked like. Snug Harbor was ru n as much as possible like a ship. But there can be no doubt that the rules laid dow n went beyond what was needed. For years the men at Snug Harbor had di vided themselves into two classes, "deepwatermen and coasters." Deepwater sailors considered themselves in a class far above the men in the coastal trade. As time drew on, steamboat men began to come to the Harbo r. Sailormen joined in scorn ing them, which made the "coasters" feel better. Fishermen were on the bottom of the ladder, but they were reluctantl y admitted . This hierarchy still exists. Tankermen are considered infe rio r to those that served on fre ighters. Between 1833 and 1976, 7,000 men came to Sailo r's Snug Harbor. They are all dead and "stowed away on Monkey Hill " just behind the property. They were called rogues and rascals and many times they lived up to that notoriety. They were in fact the d isenfra nchised second sons of English and European fami lies, selftrai ned poets, debtors , drun ks, artisans, tradesmen , and literate adventurers. They were men with new names, men wi th hearts broken on land who trusted their souls to a new master under God , the captain of the ship, until they came to this last port. They gave Snug Harbor its purpose, and its soul . ..t

Forty-odd years ago William Main Doerflinger, whose family home was halfa mile from Snug Harbor, came to know the deepwater veterans well-and to the enrichment of us all, he invited them over to his house to sing their songs, collected with others in his classic Songs of the Sailor and Lumberman. Because ofthis invaluable intervention, we can hear today such rousing tunes as "The Leaving of Liverpool," sung as Captain Dick Maitland heard it on a night watch at sea, about a century ago.

Discipline was strict, but it's debatable whether Ja ck would have understood or liked a slacker style. He'd been to a hard school.

The iron men who manned the ships, wooden and otherwise, of square-rigger days, will be remembered fo r many reasons. Of these, their unfo rgettable shanties are not the most important. Yet neither are they the least important, fo r here, in these songs made up in the midst of toil and hardship and loneliness , is perh aps the finest reco rd that the real "common sailor" has left us of himself. Unsurpassed by any other fo lk songs in their inspiring tunes, they are hardly to be equaled for the unconquerable spirit that rings fo rth , without dramatics, in every line. It has been said that the deeper fun ction of music is to express what cannot be said in wo rds. For the sailorman, that was one fun ction of his shanties. Songs as fresh and bracing as the salt sea winds into whose teeth they were flung, they live on to enrich our heritage of folk song.

" There would perhaps be a man with an accordion in the middle of the hatch," said Captain P'atrick Tayluer in a recorded interview. " He would stri ke up a familiar tune, and away all the sailors would sing it! The office rs would often come down and join in the choruses. The cap' n he would stand at the break of the poop, and smile and sing the choruses with the men, sometimes. " These songs, they went around , all over the diffe rent ships, and the men would sing them so as to bring cheer to the watch that was going to have the eight hours out that night-four hours between eight and twelve, and fo ur hours between four and eight." Dick Maitland , who sang "The Leaving of Liverpool ," learned it about 1885, when he was bosun of the American ship General Knox. " I was on deck one night ,'' he said , "when I heard a Li verpool man singin' it in the fo'c's le_ . . Yessir, that song hit the spot!" -From Songs of the Sailor and Lumberman , collected and compiled by William Main Doerflinger (New York, Ma cmillan, 1972), copyright 1951, ÂŠ 1972 by William M. Doerflinger. Reprinted by permission.

The great bow piece, (see cover) carved by an anonymous craftsman in Philadelphia, makes an impressive statement in the Main Hall, expressing the confidence and fie rce pride of late 19th-century America. Above, the piece in situ soon after the commissioning of the juttingjawed cruiser in 1893.

The Bow Piece of the Cruiser New York A 10,000-pound bell bouy for the lighthouse exhibit , now a 3,000-pound bow piece from the armored cruiser New York- these are the kind of weighty object now being collected at Snug Harbor. The bow piece fea tures the shield of New York State, fl anked by Liberty holding her torch , and Justice with her scales-the whole surmounted by a truly formidable American Bald Eagle, with the face of Neptune in full cry beneath . New York , commissioned in 1893, played a distinguished role as Sampson's fl agship in the Spanish-American War, 189 8. Subsequent duties took her to Tsarist Russia and China . Finally stricken from the Navy Register in 1938, she was scuttled to prevent capture by the Japanese in December 1941, in Manila Bay. Along the way, in 1907, she lost her bow piece, this kind of work being considered incompatible with the image of a modern steel navy. Figureheads and bow shields " were expensive, added a good deal of weight , and served no practical purpose in wa rfare," in the words of the curmudgeonl y order that ended this millenia-old practice. Staten Islander William Russonello found the discarded carving in a basement in Washington State 18 years ago, and campaigned to get it back through promises made and fo rgotten. In 1965 he'd written Governor Rockefeller urging its return to New Yo rk , wherever the Governor thought best. " However,'' he added , "as a Staten Islander I would offer Sailors' Snug Harbor on Staten Island fo r consideration .. .." And that is where it has ended up, on permanent loan from the US Navy. SEA HISTORY, FALL 1983