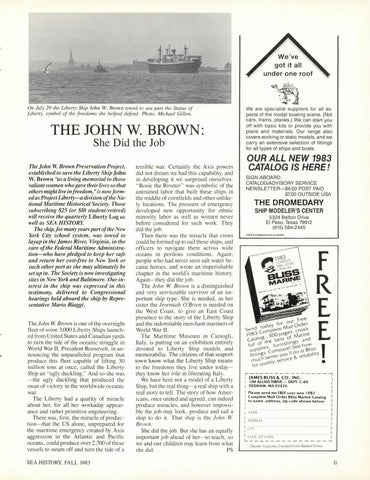 On July 29 the Liberty Ship John W. Brown towed to sea past the Statue of Liberty, symbol of the freedoms she helped defend. Photo, Michael Gillen.

We are specialist suppliers for all aspects of the modf?I boating scene. (Not cars, trains, planes.) We can start you off with basic kits or provide you with plans and materials. Our range also covers working or static models, and we carry an extensive selection of fittings for all types of ships and boats.

THE JOHN W. BROWN: She Did the Job The John W. Brown Preservation Project, established to save the Liberty Ship John W. Brown '~s a living memorial to those valiant seamen who gave their lives so that others might live in freedom ," is now fonned as Project Liberty-a division ofthe National Maritime Historical Society. Those subscribing $25 (or $10 student/retired) will receive the quarterly Liberty Log as well as SEA HISTORY. The ship, for many years part ofthe New York City school system, was towed to layup in the James River, Virginia, in the care of the Federal Maritime Administration-who have pledged to keep her safe and return her cost-free to New York or such other port as she may ultimately be set up in. The Society is now investigating sites in New York and Baltimore. Our interest in the ship was expressed in this testimony, delivered to Congressional hearings held aboard the ship by Representative Mario Biaggi. The John W Brown is one of the overnight fl eet of some 3,000 Libe rty Ships laun ched from United States and Canadi an ya rds to turn the tide of the oceanic struggle in Wo rld War II . Pres ident Roosevelt , in announcing the unparalleled progra m th at produce this fleet capable of lifting 30 million tons at once, called the Liberty Ship an " ugly duckling." And so she was - the ugly duckling that produced the swan of victory in the worldwide oceanic war. The Liberty had a quality of miracle about her, for al l her workaday appearance and rather primitive eng ineering. There was, first , the miracle of production- that the US alone, unprepared for th e maritime emergency created by Axi s agg ress ion in the Atlantic and Pac ific oceans, could produce over 2,700 of these vessels to steam off and turn the tide of a SEA HISlORY, FALL 1983

terrible war. Ce rtainl y the Ax is powers did not dream we had this capability, and in developing it we surprised ourselves . " Rosie the Ri veter" was symbolic of the untrained labor that built these ships in the middle of cornfi elds and other unlikely locations. The press ure of emergency developed new opportunity fo r ethnic minority labor as we ll as women never before conside red fo r such wo rk . They did the job. Then there was th e miracle that crews could be form ed up to sail these ships, and officers to nav igate them across w ide oceans in peril ous conditions. Again , people who had never seen salt water became heroes, and wrote an imperi shabl e chapter in the wo rld 's maritime history. Again- they did th e job. The John W Brown is a distinguished and very serviceable survivo r of an important ship type. She is needed , as her sister the Jeremiah O 'Brien is needed on the West Coast , to give an East Coast presence to the story of th e Liberty Ship and the indomitable merchant mariners of World War II . The Maritime Museum in Camogli , Italy, is putting on an ex hibition entirely devoted to Liberty Ship models and memorabilia. The c itizens of th at seaport town know what the Liberty Ship means to the freedoms they live under todayth ey know her ro le in liberating Italy. We have here not a model of a Liberty Ship, but the rea l thing-a real ship w ith a real sto ry to tell. The sto ry of how Americans, once united and ag reed , can indeed produce miracles , and however imposs ible the job may look , produce and sail a ship to do it. That ship is the John W BrolVn. She did the job. But she has an equall y impo rtant job ahead of her- to teach , so we and our children may learn fro m what she did . PS