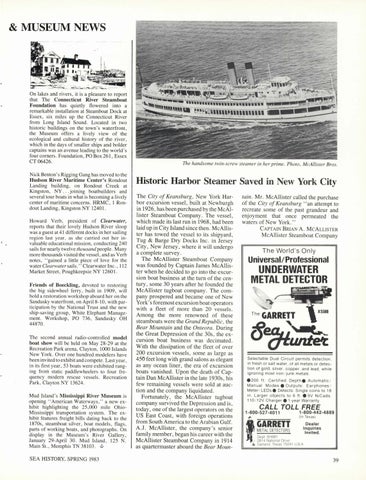 On lakes and rivers , it is a pleasure to report that The Connecticut River Steamboat Foundation has quietly flowered into a remarkable installation at Steamboat Dock at Essex, six miles up the Connecticut River from Long Island Sound. Located in two historic buildings on the town&#39;s waterfront, the Museum offers a lively view of the ecological and cultural history of the river , which in the days of smaller ships and bolder captains was an avenue leading to the world &#39; s four corners. Foundation , PO Box 261, Essex CT 06426. Nick Benton&#39;s Rigging Gang has moved to the Hudson River Maritime Center&#39;s Rondout Landing building, on Rondout Creek at Kingston, NY ... joining boatbuilders and several tour boats in what is becoming a lively center of maritime concerns. HRMC, 1 Rondout Landing, Kingston NY 12401. Howard Verb , president of Clearwater, reports that their lovely Hudson River sloop was a guest at 41 different docks in her sailing region last year, as she carried out her inva luable educational mission, conducting 240 sails for nearly twelve thousand people . Many more thousands visited the vessel, and as Verb notes , &quot;gained a little piece of love for the water Clearwater sails.&#39;&#39; Clearwater Inc. , 112 Market Street, Poughkeepsie NY 12601. Friends of Boeckling, devoted to restoring the big sidewheel ferry , built in 1909, will hold a restoration workshop aboard her on the Sandusky waterfront , on April 8-10 , with participation by the National Trust and the new ship-saving group , White Elephant Management. Workshop, PO 736, Sandusky OH 44870. The second annual radio-controlled model boat show will be held on May 28-29 at the Recreation Park arena , Clayton, 1000 Islands New York . Over one hundred modelers have been invited to exhibit and compete. Last year, in its first year, 53 boats were exhibited ranging from static paddlewheelers to four frequency modern rescue vessels. Recreation Park, Clayton NY 13624. Mud Island &#39;s Mississippi River Museum is opening &quot;American Waterways ,&quot; a new exhibit highlighting the 25 ,000 mile OhioMississippi transportation system . The exhibit features freight bills dating back to the 1870s, steamboat silver, boat models , flags , parts of working boats, and photographs. On display in the Museum&#39;s River Gallery, January 29-April 30. Mud Island , 125 N. Main St., Memphis TN 38103. J, SEA HISTORY, SPRING 1983

The handsome twin-screw steamer in her prime. Photo , McAllister Bros.

Historic Harbor Steamer Saved in New York City The City of Keansburg, New York Harbor excursion vessel, built at Newburgh in 1926, has been purchased by the McAllister Steamboat Company . The vessel, which made its last run in 1968 , had been laid up in City Island since then . McAllister has towed the vessel to its shipyard , Tug &amp; Barge Dry Docks Inc . in Jersey City , New Jersey, where it will undergo a complete survey. The McAllister Steamboat Company was founded by Captain James McAllister when he decided to go into the excursion boat business at the turn of the century, some 30 years after he founded the McAllister tugboat company. The company prospered and became one of New York&#39; s foremost excursion boat operators with a fleet of more than 20 vessels . Among the more renowned of these steamboats were the Grand Republic, the Bear Mountain and the Onteora. During the Great Depression of the 30s, the excursion boat business was decimated . With the dissipation of the fleet of over 200 excursion vessels , some as large as 450 feet long with grand salons as elegant as any ocean liner, the era of excursion boats vanished . Upon the death of Captain Dan McAllister in the late 1930s, his few remaining vessels were sold at auction and the company liquidated. Fortunately, the McAllister tugboat company survived the Depression and is , today, one of the largest operators on the US East Coast, with foreign operations from South America to the Arabian Gulf. A.J . McAllister, the company &#39; s senior family member, began his career with the McAllister Steamboat Company in 1914 as quartermaster aboard the Bear Moun-

tain. Mr. McAllister called the purchase of the City of Keansburg &quot;an attempt to recreate some of the past grandeur and enjoyment that once permeated the waters of New York. &quot; CAPTAIN BRIA N A. MCALLISTER