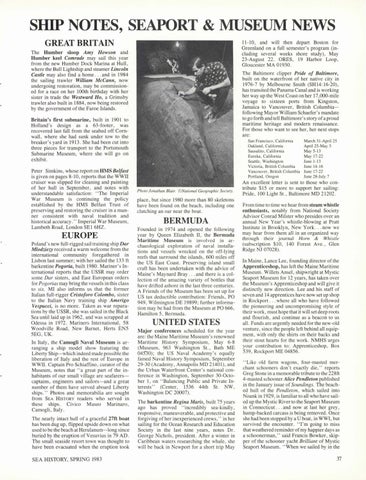 The Humber sloop Amy Howson and Humber keel Comrade may sail this year from the new Humber Dock Marina at Hull , where the Bull Lightship and steamer Lincoln Castle may also find a home ... and in 1984 the sailing traw ler William McCann, now undergoing restoration, may be commissioned for a race on her lOOth birthday with her sister in trade the Westward Ho, a Grimsby trawler also built in 1884, now being restored by the government of the Faroe Islands.

The Baltimore clipper Pride of Baltimore, built on the waterfront of her native city in 1976-7 by Melbourne Smith (SH14: 16-20), has transited the Panama Canal and is working her way up the West Coast on her 17,000-mile voyage to sixteen ports from Kingston, Jamaica to Vancouver, British Columbiafollowing Mayor William Schaefer&#39;s mandate to go forth and tell Baltimore&#39;s story of a proud maritime heritage and modern renaissance. For those who want to see her, her next stops are:

Britain&#39;s first submarine, built in 190 I to Holland &#39;s design as a 63-footer, was recovered last fall from the seabed off Cornwall, where she had sunk under tow to the breaker&#39;s yard in 1913. She had been cut into three pieces for transport to the Portsmouth Submarine Museum, where she will go on exhibit. Peter Simkins , whose report on HMS Belfast is given on pages 8-10, reports that the WWII cruiser was slipped for cleaning and painting of her hull in September, and notes with understandable satisfaction: &quot;The Imperial War Museum is continuing the policy established by the HMS Belfast Trust of preserving and restoring the cruiser in a manner consistent with naval tradition and historical accuracy.&#39;&#39; Imperial War Museum , Lambeth Road, London SE ! 6HZ.

EUROPE Poland&#39;s new fu ll-rigged sail training ship Dar Mlodziezy received a warm welcome from the international community foregathered in Lisbon last summer; with her sailed the 133 ft barkentine Pogoria, built 1980. Mariner&#39;s International reports that the USSR may order some Dar sisters, and East European orders for Pogorias may bring the vessels in this class to six. MI also informs us that the former Italian full-rigger Cristoforo Colombo, sister to the Italian Navy training ship Amerigo Vespucci, is no more. Taken as war reparations by the USSR, she was sailed in the Black Sea unti l laid up in 1962, and was scrapped at Odessa in 1972. Mariners International , 58 Woodville Road, New Barnet , Herts ENS 5EG , UK. In Italy, the Camogli Naval Museum is arranging a ship model show featuring the Liberty Ship-which indeed made possible the liberation of Italy and the rest of Europe in WWII . Captain Pro Schiaffino , curator of the Museum , notes that &quot;a great part of the inhabitants of our small village are seafarerscaptains, engineers and sailors-and a great number of them have served aboard Liberty ships.&quot; Photos and memorabilia are sought from SEA HISTORY readers who served in these ships. Civico Museo Marinaro , Camogli, Italy. The nearly intact hull of a graceful 27ft boat has been dug up , flipped upside down on what used to be the beach at Herulanum-long since buried by the eruption of Vesuvius in 79 AD . The small seaside resort town was thought to have been evacuated when the eruption took SEA HISTORY, SPRING 1983

place, but since 1980 more than 80 skeletons have been found on the beach , including one clutching an oar near the boat.

BERMUDA Founded in 1974 and opened the following year by Queen Elizabeth II, the Bermuda Maritime Museum is involved in archaeological exploration of naval installations and vessels wrecked on the off-lying reefs that surround the islands , 600 miles off the US East Coast. Preserving island small craft has been undertaken with the advice of Maine&#39;s Maynard Bray ... and there is a collection of the amazing variety of bottles that have drifted ashore in the last three centuries . A Friends of the Museum has been set up for US tax deductible contribution: Friends , PO 949 , Wilmington DE 19899 ; further information may be had from the Museum at PO 666, Hamilton 5, Bermuda.

UNITED STATES Major conferences scheduled for the year are: the Maine Maritime Museum &#39; s renowned Maritime History Symposium, May 6-8 (Museum, 963 Washington St., Bath ME 04530); the US Naval Academy&#39;s equally famed Naval History Symposium, September 29-30 (Academy, Annapolis MD 21401), and the Urban Waterfront Center&#39;s national conference in Washington, September 30-0ctober I , on &quot; Balancing Public and Private Interests&quot; (Center, 1536 44th St. NW , Washington DC 20007). The barkentine Regina Maris, built 75 years ago has proved &quot; incredibly sea-kindly, responsive , maneuverable, and protective and forgiving of her inexperienced crews,&quot; in her sailing for the Ocean Research and Education Society in the last nine years, notes Dr. George Nichols , president. After a winter in Caribbean waters researching the whale, she will be back in Newport for a short trip May

An excellent letter is sent to those who contribute $15 or more to support her sailing: Pride, 100 Light St., Baltimore MD 21202. From time to time we hear from steam whistle enthusiasts, notably from National Society Advisor Conrad Milster who presides over an annual New Year &#39;s whistle-blowing at Pratt Institute in Brooklyn , New York .. . now we may hear from them all in an organized way through their journal Horn &amp; Whistle (subscription $10, 140 Forest Ave., Glen Ridge NJ 07028). In Maine, Lance Lee , founding director of the Apprenticeshop, has left the Maine Maritime Museum. Willets Ansel , shipwright at Mystic Seaport Museum for 12 years, has taken over the Museum&#39;s Apprenticeshop and will give it distinctly new direction. Lee and his staff of seven and 14 apprentices have now set up shop in Rockport ... where all who have fo ll owed the pioneering and uncompromising style of their work , must hope that it will set deep roots and flourish , and continue as a beacon to us all. Funds are urgently needed for the new-old venture, since the people left behind all equipment, with only the shirts on their backs and their stout hearts for the work. NMHS urges your contribution to : Apprenticeshop , Box 539, Rockport ME 04856. &quot; Like old farm wagons , four-masted merchant schooners don &#39; t exactly die,&quot; reports Greg Stone in a memorable tribute to the 228ft 4-masted schooner Alice Pendleton published in the January issue of Soundings. The beached hull of the Pendleton, which sailed into Noank in 1929, is familiar to all who have sai led up the Mystic River to the Seaport Museum in Connecticut ... and now at last her grey, hump-backed carcass is being removed. Once she had been stopped by a U boat, in WWI , but survived the encounter. &quot;I&#39;m going to miss that weathered reminder of my happier days as a schoonerman,&quot; said Francis Bowker, skipper of the schooner yacht Brilliant of Mystic Seaport Museum. &quot; When we sailed by in the 37