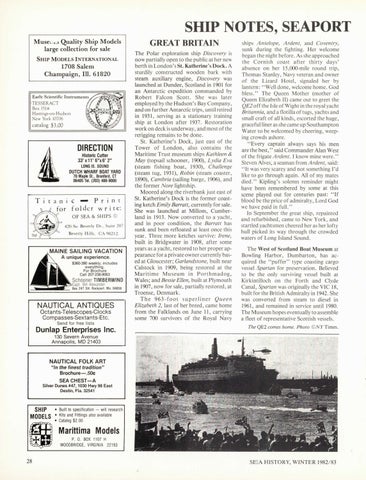 GREAT BRITAIN The Polar exploration ship Discovery is now partially open to the public at her new berth in London&#39;s St. Katherine&#39;s Dock. A sturdily constructed wooden bark with steam auxiliary engine, Discovery was launched at Dundee, Scotland in 1901 for an Antarctic expedition commanded by Robert Falcon Scott. She was later employed by the Hudson&#39;s Bay Company , and on further Antarctic trips , until retired in 1931, serving as a stationary training ship at London after 1937 . Restoration work on deck is underway, and most of the rerigging remains to be done. St. Katherine&#39;s Dock, just east of the Tower of London, also contains the Maritime Trust museum ships Kathleen &amp; May (topsail schooner, 1900), Lydia Eva (steam fi shing boat, 1930), Challenge (steam tug, 1931 ), Robin (steam coaster, 1890), Cambria (sailing barge, 1906), and the former Nore lightship. Moored along the riverbank just east of St. Katherine&#39;s Dock is the former coasting ketch Emily Barratt, currently for sale . She was launched at Millom, Cumberland in 1913. Now converted to a yacht, and in poor condition, the Barratt has sunk and been refloated at least once this year. Three more ketches survive: Irene, built in Bridgwater in 1908, after some years as a yacht, restored to her proper appearance for a private owner currently based at Gloucester; Garlands/one, built near Calstock in 1909, being restored at th e Maritime Museum in Porthmad og, Wales; and Bessie Ellen, built at Plymouth in 1907, now for sale, partially restored , at Troense, Denmark . The 963-foot superliner Qu een Elizabeth 2, last of her breed, came home from the Falk lands on June 11 , carrying some 700 survivors of the Royal Navy

ships Antelope, Ardent, and Covenf!y, sunk during the fighting . Her welcome began the ni ght before. As she approached th e Cornish coast after thirty da ys&#39; absence on her 15,000-mile round trip , Thomas Stanley, Navy veteran and owner o f the Lizard Hotel , signaled her by lantern : &quot;Well done, welcome home. God bless. &quot; The Queen Mother (mother of Queen Elizabeth II) came out to greet the QE2 off the Isle of Wight in th e royal yacht Britannia, and a flotilla of tugs, yachts and small craft of all kinds, escorted the huge, graceful liner as she came up Southampton Water to be welcomed by cheering, weeping crowds ashore. &quot;Every captain always says his men are the best,&#39; &#39; said Commander Alan West o f the frigate Ardent. I know mine were.&quot; Steven Alves, a seaman from Ardent, said: &quot; It was very scarey and not something I&#39;d like to go through again . All of my mates died .&quot; Kipling&#39;s solemn reminder might have been remembered by some at this scene played out for centuries past: &quot;If blood be the price of admiralt y, Lord God we have paid in full .&quot; In September the great ship, repainted and refurbished, came to New York , and startled yachtsmen cheered her as her lofty hull picked its way through the crowded waters of Long Island Sound . The West of Scotland Boat Museum at Bowling Harbor, Dumbarton, has acquired the &quot;puffer&quot; type coasting cargo vessel Spartan for preservation . Believed to be the only surviving vessel built at Kirkintilloch on th e Forth and Clyde Canal , Spartan was originall y the VIC 18, built for the British Admiralty in 1942. She was converted from steam to diesel in 1961, and remained in service until 1980. The Museum hopes eventually to assemble a fleet of representative Scottish vessels. The QE2 comes home. Photo ©NY Times.