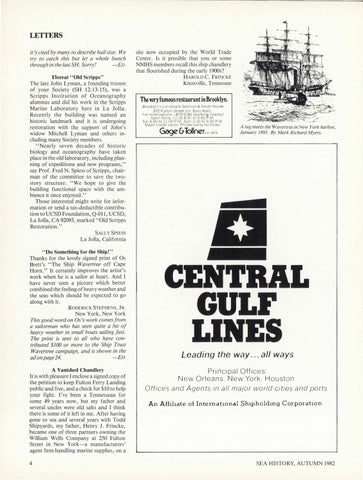 LETTERS it&#39;s cited by many to describe hull size. We try to catch this but let a whole bunch through in the last SH. Sorry! -ED. Floreat &quot;Old Scripps&quot; The late John Lyman, a founding trustee of your Society (SH 12:13-15), was a Scripps Institution of Oceanography alumnus and did his work in the Scripps Marine Laboratory here in La Jolla. Recently the building was named an historic landmark and it is undergoing restoration with the support of John&#39;s widow Mitchell Lyman and others including many Society members. &quot;Nearly seven decad es of historic biology and oceanography have taken place in the old laboratory, including planning of expeditions and new programs,&quot; say Prof. Fred N. Spiess of Scripps, chairman of the committee to save the twostory structure. &quot;We hope to give the building functional space with the ambience it once enjoyed.&#39;&#39; Those interested might write for information or send a tax-deductible contribution to UCSD Foundation, Q-011, UCSD, La Jolla, CA 92093, marked &quot;Old Scripps Restoration .&#39;&#39;

site now occupied by the World Trade Center. ls it possible that you or some NMHS members recall this sh ip chand lery that flouri shed during the early 1900s? HAROLD C. FRINCKE Knoxville, Tennessee

&quot;Do Something for the Ship!&quot; Thanks for the lovely signed print of Os Brett&#39;s &quot;The Ship Wavertree off Cape Horn .&quot; It certainly improves the artist&#39;s work when he is a sailor at heart. And I have never seen a picture which better combined the feeling of heavy weather and the seas which should be expected to go along with it. RODERI CK STEPHENS, JR .

New York, New York This good word on Os&#39;s work comes from a sailorman who has seen quite a bit of heavy weather in small boats sailing fast . The print is sent to all who have contributed $100 or more to the Ship Trust Wavertree campaign, and is shown in the -ED. ad on page 24.

A Vanished Chandlery It is with pleasure I enclose a signed copy of the petition to keep Fulton Ferry Landing public and free, and a check for $10 to help your fight. I&#39;ve been a Tennessean for some 49 years now, but my father and several uncles were old salts and I think there is some of it left in me. After having gone to sea and several years with Todd Shipyards, my father, Henry J. Frincke, became one of three partners owning the William Wells Company at 250 Fulton Street in New York-a manufacturers&#39; agent firm handling marine supplies, on a 4