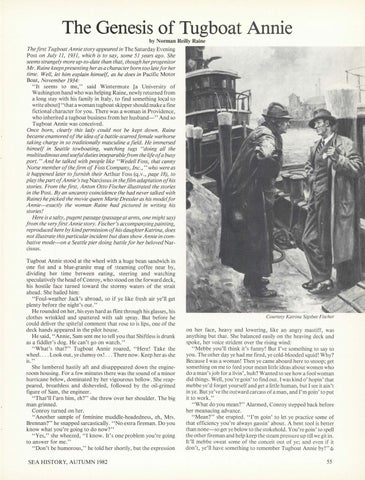 The Genesis of Tugboat Annie by Norman Reilly Raine

The first Tugboat Annie story appeared in The Saturday Evening Post on July 11, 1931, which is to say, some 51 years ago. She seems strangely more up-to-date than that, though her progenitor Mr. Raine keeps presenting her as a character born too late/or her time. Well, let him explain himself, as he does in Pacific Motor Boat, November 1934: &quot;It seems to me,&quot; said Wintermute [a University of Washington hand who was helping Raine, newly returned from a long stay with his family in Italy, to find something local to write about] &#39;&#39;that a woman tugboat skipper should make a fine fictional character for you. There was a woman in Providence, who inherited a tugboat business from her husband-&quot; And so Tugboat Annie was conceived. Once born, clearly this lady could not be kept down. Raine became enamored of the idea of a battle-scarred female warhorse taking charge in so traditionally masculine a field. He immersed himself in Seattle towboating, watching tugs &quot;doing all the multitudinous and useful duties inseparable from the life ofa busy port.&quot; And he talked with people like &quot;Wedell Foss, that canny Norse member of the firm of Foss Company, Inc.,&quot; who were as it happened later to furnish their Arthur Foss (q . v., page 18), to play the part ofAnnie&#39;s tug Narcissus in the film adaptation of his stories. From the first, Anton Otto Fischer illustrated the stories in the Post. By an uncanny coincidence (he had never talked with Raine) he picked the movie queen Marie Dressler as his mode/for Annie-exactly the woman Raine had pictured in writing his stories! Here is a salty, pugent passage (passage at arms, one might say) from the very first Annie story. Fischer&#39;s accompanying painting, reproduced here by kind permission of his daughter Katrina, does not illustrate this particular incident but does show Annie in combative mode&#39;-on a Seattle pier doing battle for her beloved Narcissus. Tugboat Annie stood at the wheel with a huge bean sandwich in one fist and a blue-granite mug of ~ teaming coffee near by, dividing her time between eating, steering and watching speculatively the head of Conroy, who stood on the forward deck, his hostile face turned toward the stormy waters of the strait ahead. She hailed him: &quot;Foul-weather Jack&#39;s abroad, so if ye like fresh air ye&#39;ll get plenty before the night&#39;s out.&quot; He rounded on her, his eyes hard as flint through his glasses, his clothes wrinkled and spattered with salt spray. But before he could deliver the spiteful comment that rose to is lips, one of the deck hands appeared in the pilot house . He said, &quot;Annie, Sam sent me to tell you that Shiftless is drunk as a fiddler&#39;s dog. He can&#39;t go on watch.&quot; &quot;What&#39;s that?&quot; Tugboat Annie roared, &quot;Here! Take the wheel. ... Look out, ye clumsy ox! ... There now. Keep her as she is.&#39;&#39; She lumbered hastily aft and disapppeared down the engineroom housing . For a few minutes there was the sound of a minor hurricane below , dominated by her vigourous bellow. She reappeared, breathless and disheveled, followed by the oil-grimed figure of Sam, the engineer. &quot;That&#39;ll l&#39;arn him, eh?&quot; she threw over her shoulder. The big man grinned. Conroy turned on her. &quot;Another sample of feminine muddle-headedness, eh, Mrs . Brennan?&quot; he snapped sarcastically. &quot;No extra fireman. Do you know what you&#39;re going to do now?&quot; &quot;Yes,&quot; she wheezed, &quot;I know. It&#39; s one problem you&#39;re going to answer for me.&quot; &quot;Don&#39;t be humorous,&quot; he told her shortly, but the expression SEA HISTORY, AUTUMN 1982