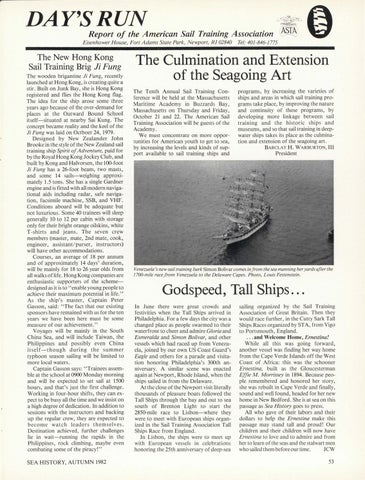 The New Hong Kong Sail Training Brig Ji Fung The wooden brigantine Ji Fung, recently launched at Hong Kong, is creating quite a stir. Built on Junk Bay, she is Hong Kong registered and flies the Hong Kong flag. The idea for the ship arose some three years ago because of the over-demand for places at the Outward Bound School itself-situated at nearby Sai Kung. The concept became reality and the keel of the Ji Fung was laid on Octboer 24, 1979. Designed by New Zealander John Brooke in the style of the New Zealand sail training ship Spirit of Adventure, paid for by the Royal Hong Kong Jockey Club, and built by Kong and Halvorsen, the 100-foot Ji Fung has a 26-foot beam, two masts, and some 14 sails-weighing approximately 1.5 tons. She has a single Gardner engine and is fitted with all modern navigational aids including radar, safe navigation, facsimile machine, SSB, and VHF. Conditions aboard will be adequate but not luxurious. Some 40 trainees will sleep generally 10 to 12 per cabin with storage only for their bright orange oilskins, white T-shirts and jeans. The seven crew members (master, mate, 2nd mate, cook, engineer, assistant/ purser, instructors) will have other accommodations. Courses, an average of 18 per annum and of approximately 14 days&#39; duration, will be mainly for 18 to 26 year olds from all walks of Ii fe. Hong Kong companies are enthusiastic supporters of the schemedesigned as it is to &quot;enable young people to achieve their maximum potential in life.&quot; As the ship&#39;s master, Captain Peter Gasson, said: &quot;The fact that our existing sponsors have remained with us for the ten years we have been here must be some measure of our achievement.&quot; Voyages will be mainly in the South China Sea, and will include Taiwan, the Philippines and possibly even China itself-though during the summer typhoon season sailing will be limited to more local waters. Captain Gasson says: &quot;Trainees.assemble at the school at 0900 Monday morning and will be expected to set sail at 1500 hours, and that&#39;s just the first challenge. Working in four-hour shifts, they can expect to be busy all the time and we insist on a high degree of dedication. In addition to sessions with the instructors and backing up the regular crew, they are expected to become watch leaders themselves. Destination achieved, further challenges lie in wait-running the rapids in the Philippines, rock climbing, maybe even combating some of the piracy!&quot; SEA HISTORY, AUTUMN 1982

The Culmination and Extension of the Seagoing Art The Tenth Annual Sail Training Conference will be held at the Massachusetts Maritime Academy in Buzzards Bay, Massachusetts on Thursday and Friday, October 21 and 22. The American Sail Training Association will be guests of the Academy. We must concentrate on more opportunities for American youth to get to sea, by increasing the levels and kinds of support available to sail training ships and

programs, by increasing the varieties of ships and areas in which sail training programs take place, by improving the nature and continuity of these programs, by developing more linkage between sail training and the historic ships and museums, and so that sail training in deepwater ships takes its place as the culmination and extension of the seagoing art. BARCLAY H. WARBURTON, Ill President

Venezuela&#39;s new sail training bark Simon Bolivar comes in from the sea manning her y ards after the 1700-mile race from Venezuela to the Delaware Capes. Photo, Louis Festenstein.

Godspeed, Tall Ships . .. In June there were great crowds and festivities when the Tall Ships arrived in Philadelphia. For a few days the city was a changed place as people swarmed to their waterfront to cheer and admire Gloria and Esmeralda and Simon Bolivar, and other vessels which had raced up from Venezuela, joined by our own US Coast Guard&#39;s Eagle and others for a parade and visitation honoring Philadelphia&#39;s 300th anniversary. A similar scene was enacted again at Newport, Rhode Island, when the ships sailed in from the Delaware. At the close of the Newport visit literally thousands of pleasure boats followed the Tall Ships through the bay and out to sea south of Brenton Light to start the 2850-mile race to Lisbon-where they were to meet with European ships organized in the Sail Training Association Tall Ships Race from England. In Lisbon, the ships were to meet up with European vessels in celebrations honoring the 25th anniversary of deep-sea

sailing organized by the Sail Training Association of Great Britain . Then they would race further, in the Cutty Sark Tall Ships Races organized by ST A, from Vigo to Portsmouth, England. ... and Welcome Home, Ernestina! While all this was going forward, another vessel was finding her way home from the Cape Verde Islands off the West Coast of Africa: this was the schooner Ernestina, built as the Gloucesterman Effie M. Morrissey in 1894. Because people remembered and honored her story, she was rebuilt in Cape Verde and finally, sound and well found, headed for her new home in New Bedford. She is at sea on this passage as Sea History goes to press. All who gave of their labors and their dollars to help the Ernestina make this passage may stand tall and proud! Our children and their children will now have Ernestina to love and to admire and from her to learn of the seas and the stalwart men who sailed them before our time. JCW 53