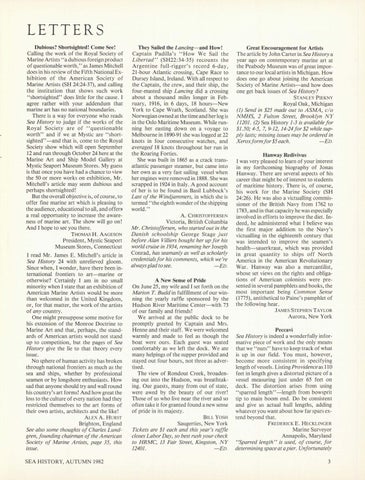 LETTERS Dubious? Shortsighted! Come See! Calling the work of the Royal Society of Marine Artists &quot;a dubious foreign product of questionable worth,&#39;&#39; as James Mitchell does in his review of the Fifth National Exhibition of the American Society of Marine Artists (SH 24:24-37), and calling the institution that shows such work &quot;shortsighted&quot; does little for the cause. I agree rather with your addendum that marine art has no national boundaries. There is a way for everyone who reads Sea History to judge if the works of the Royal Society are of &quot;questionable worth&quot; and if we at Mystic are &quot;shortsighted&quot;-and that is, come to the Royal Society show which will open September 12 and run through October 24 here at the Marine Art and Ship Model Gallery at Mystic Seaport Museum Stores. My guess is that once you have had a chance to view the 50 or more works on exhibition, Mr. Mitchell&#39;s article may seem dubious and perhaps shortsighted! But the overall objective is, of course, to offer fine marine art which is pleasing to the audience, educational to all, and offer~ a real opportunity to increase the awareness of marine art. The show will go on! And I hope to see you there. THOMAS H. AAGESON

President, Mystic Seaport Museum Stores, Connecticut I read Mr. James E. Mitchell&#39;s article in Sea History 24 with unrelieved gloom. Since when, I wonder, have there been international frontiers to art-marine or otherwise? Certainly I am in no small minority when I state that an exhibition of American Marine Artists would be more than welcomed in the United Kingdom, or, for that matter, the work of the artists of any country. One might presuppose some motive for his extension of the Monroe Doctrine to Marine Art and that, perhaps, the standards of American artists would not stand up to competition, but the pages of Sea History give the lie to that theory every issue. No sphere of human activity has broken through national frontiers as much as the sea and ships, whether by professional seamen or by longshore enthusiasts. How sad that anyone should try and wall round his country&#39;s art forms! And how great the loss to the culture of every nation had they restricted themselves to the art forms of their own artists, architects and the like!

They Sailed the Lancing-and How! Captain Padilla&#39;s &quot;How We Sail the Libertad&quot; (SH22:34-35) recounts the Argentine full-rigger&#39;s record 6-day, 21-hour Atlantic crossing, Cape Race to Dursey Island, Ireland. With all respect to the Captain, the crew, and their ship, the four-masted ship Lancing did a crossing about a thousand miles longer in February, 1916, in 6 days, 18 hours-New York to Cape Wrath, Scotland. She was Norwegian owned at the time and her log is in the Oslo Maritime Museum. While running her easting down on a voyage to Melbourne in 1890-91 she was logged at 22 knots in four consecutive watches, and averaged 18 knots throughout her run in the Roaring Forties. She was built in 1865 as a crack transatlantic passenger steamer, but came into her own as a very fast sailing vessel when her engines were removed in 1888. She was scrapped in 1924 in Italy. A good account of her is to be found in Basil Lubbock&#39;s Last of the Windjammers, in which she is termed &quot;the eighth wonderofthe shipping world.&quot; A. CHRISTOFFERSEN

Victoria, British Columbia Mr. Christoffersen, who started out in the Danish schoolship George Stage just before A lan Villiers bought her up for his world cruise in 1934, renaming her Joseph Conrad, has seamanly as well as scholarly credentials for his comments, which we&#39;re alwaysgladtosee. - ED. A New Sense of Pride On June 25, my wife and I set forth on the Marion T. Budd in fulfillment of our winning the yearly raffle sponsored by the Hudson River Maritime Center-with 73 of our family and friends! We arrived at the public dock to be promptly greeted by Captain and Mrs. Henne and their staff. We were welcomed warmly and made to feel as though the boat were ours. Each guest was seated comfortably as we left the dock. We ate many helpings of the supper provided and stayed out four hours, not three as advertised. The view of Rondout Creek, broadening out into the Hudson, was breathtaking. Our guests, many from out of state, were awed by the beauty of our river! Those of us who live near the river and so often take it for granted found a new sense of pride in its majesty.

Great Encouragement for Artists The article by John Carter in Sea History a year ago on contemporary marine art at the Peabody Museum was of great importance to our local artists in Michigan. How does one go about joining the American Society of Marine Artists-and how does one get back issues of Sea History? STANLEY PIEKNY

Royal Oak, Michigan (1) Send in $25 made out to ASMA, c/ o NMHS, 2 Fulton Street, Brooklyn NY 11201. (2) Sea History 1-3 is available for $1.50; 4-5, 7, 9-12, 14-24 for $2 while supply lasts; missing issues may be ordered in Xeroxformfor $5 each. -ED. Hanway Redivivus I was very pleased to learn of your interest in my forthcoming biography of Jonas Hanway. There are several aspects of his career that might be of interest to students of maritime history. There is, of course, his work for the Marine Society (SH 24:26). He was also a victualling commissioner of the British Navy from 1762 to 1783, and in that capacity he was especially involved in efforts to improve the diet. Indeed, he administered what I believe was the first major addition to the Navy&#39;s victualling in the eighteenth century that was intended to improve the seamen&#39;s health-sauerkraut, which was provided in great quantity to ships off North America in the American Revolutionary War. Hanway was also a mercantilist, whose set views on the rights and obligations of American colonists were presented in several pamphlets and books, the most important being Common Sense (1775), antithetical to Paine&#39;s pamphlet of the following hear. JAMES STEPHEN TAYLOR

Aurora, New York Peccavi Sea History is indeed a wonderfully informative piece of work and the only means that we &quot;nuts&quot; have to keep track of what is up in our field. You must, however, become more consistent in specifying length of vessels. Listing Providence as 110 feet in length gives a distorted picture of a vessel measuring just under 65 feet on deck. The distortion arises from using &quot;sparred length&quot;-length from bowsprit tip to main boom end. Do be consistent and give us actual hull lengths, adding whatever you want about how far spars extend beyond that. FREDERICK E. HECKLINGER Marine Surveyor Annapolis, Maryland &quot;Sparred length&quot; is used, of course, for determining space at a pier. Unfortunately 3