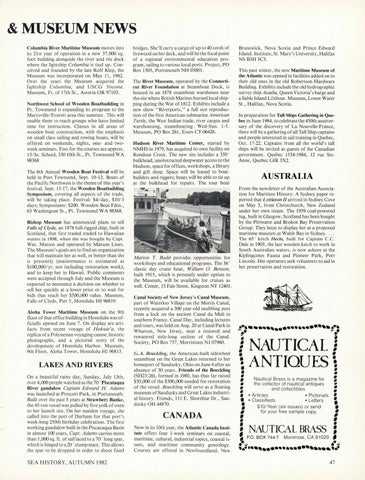 & MUSEUM NEWS Columbia River Maritime Museum moves into its 21 st year of operation in a new 37 ,000 sq. foot building alongside the river and the dock where the lightship Columbia is tied up . Conceived and founded by the late Rolf Klep, the Museum was incorporated on May 11, 1962. Over the years the Museum acquired the lightship Columbia, and USCG Yocona. Mu seum, Ft. of 17th St., Astoria OR 97103. Northwest School of Wooden Boatbuilding in Pt. Townsend is expanding its program to the Marysville/ Everett area this summer. This will enable them to reach groups who have limited time for instruction . Classes in all areas of wooden boat construction, with the emphasis on small class sailing and rowing boats, will be offered on weekends, nights, one- and twoweek seminars. Fees for the courses are approx. 13/ hr. School , 330 10th St., Pt. Townsend WA 98368 The 6th Annual Wooden Boat Festival will be held in Port Townsend, Sept. 10-12. Boats of the Pacific Northwest is the theme of this year' s festival. Sept . 13-17, the Wooden Boatbuilding Symposium, covering all aspects of the trade, will be taking place. Festival : $4/ day, $10/ 3 days; Symposiums: $200. Wooden Boat Fdtn., 63 Washington St., Pt. Townsend WA 98368. Bishop Museum has announced plans to sell Falls of Clyde, an 1878 full-rigged ship, built in Scotland, that fir st traded traded to Hawaiian waters in 1898, when she was bought by Capt. Wm . Matson and operated by Matson Lines. The Museum's goals are to find an organization that will maintain her as well, or better than she is presently (maintenance is es timated at $100,000/ yr, not including restoration work), and to keep her in Hawaii. Public comments were accepted through July and the Museum is expected to announce a decision on whether to sell her qui ckly at a lower price or to wait for bids that reach her $500,000 value . Museum , Falls of Clyde, Pier 5, Honolulu HI 96819. Aloha Tower Maritime Museum on the 9th floor of that office building in Honolu lu was officiall y opened on June 7. On display are artifacts from recent voyage of Hokule'a, the replica of a Polynesian voyaging canoe; historic photographs, and a pictorial story of the development of Honolulu Harbor. Museum, 9th Floor, Aloha Tower, Honolulu HI 96813.

LAKES AND RIVERS On a beautiful rainy day, Sunday, July 13th, over 4,000 people watched as the 70 ' Piscataqua River gundalow Captain Edward H. Adams was launched at Prescott Park, in Portsmouth. Built over the past 5 years at Strawbery Banke, the 45-ton vessel was pulled by five yolk of oxen to her launch site. On her maiden voyage, she called into the port of Durham for that port 's week-long 250th birthday celebration. The first working gundalow built in the Piscataqua Basin in almost 100 years, Capt. Adams carries more than 1,000 sq. ft. of sail laced to a 70 ' long spar, which is hinged to a 20 ' stump mast. This allows the spar to be dropped in order to shoot fi xed

bridges. She'll carry a cargo of up to 40 cords of firewood on her deck, and will be the focal point of a regional environmental education program, sailing to various local ports. Project, PO Box 1303, Portsmouth NH 03801. The River Museum, operated by the Connecticut River Foundation at Steamboat Dock, is housed in an 1878 steamboat warehouse near the site where British Marines burned local shipping during the War of 1812. Exhibits include a new show "Riverports," a full size reproduction of the first American submarine American Turtle, the West Indian trade, ri ver cargos and warehousing , steamboating. Wed-Sun. 1-5. Museum, PO Box 261, Essex CT 06426. Hudson River Maritime Center, started by NMHS in 1979, has acquired its own facility on Rondout Creek. The new site includes a 350 ' bulkhead, unobstructed deepwater access to the Hudson, space for offices, workshops, a library and gift shop. Space will be leased to boatbuilders and riggers; boats will be able to tie up at the bulkhead for repairs. The tour boat

Marion T. Budd provides opportunities for workshops and educational programs. The 36' classic day cruise boat, William 0. Benson, built 1915 , which is presently under option to the Museum, will be available for cruises as well. Center, 13 Fair Street, Kingston NY 12401. Canal Society of New Jersey's Canal Museum, part of Waterloo Village on the Morris Canal , recently acquired a 300 year-old snubbing post from a lock on the ancient Canal du Midi in southern France. Canal Day, including lectures and tours, was held on Aug. 20 at Canal Park in Wharton, New Jersey, near a restored and rewatered mile-long section of the Canal. Society, PO Box 737, Morristoen NJ 07960.

G.A. Boeckling, the American-bui lt sidewheel steamboat on the Great Lakes returned to her homeport of Sandusky, Ohio on June4after an absence of 30 years. Friends of the Boeckling (SH23:26), formed in 1980, has thus far raised $50,000 of the $300,000 needed for restoration of the vessel. Boeckling will serve as a floating museum of Sandusky and Great Lakes industrial hi story. Friends, 111 E. Shoreline Dr., Sandusk y OH 44870.

Brunswick, Nova Scotia and Prince Edward Island . Institute, St. Mary' s University, Halifax NS B3H 3C3. Th is past winter, the new Maritime Museum of the Atlantic was opened in faci lities added on to their old ones in the old Robertson Hardware Building . Exhibits include the old hydrographic survey ship Acadia, Queen Victoria' s barge and a Sable Island Lifeboat. Museum, Lower Water St., Halifax, Nova Scotia. In preparation for Tall Ships Gatheri ng in Quebec in June 1984, to celebrate the 450th anniversary of the discovery of La Nouvelle-France, there wi ll be a gat hering of all Tall Ship captains and people interested in sail training in Quebec, Oct. 17-22. Captains from all the world 's tall ships wi ll be invited as guests of the Canadian government. Quebec 1534-1984, 12 rue SteAnne, Quebec GIR 3X2.

AUSTRALIA From the newsletter of the Australian Association for Maritime History: A Sydney paper reported that Lyttleton II arrived in Sydney Cove on May 3, from Christchurch, New Zealand under her own steam. The 1939 coal-powered tug, built in Glasgow, Scotland has been bought by the Pittwater and Broken Bay Preservation Group. They hope to display her at a proposed maritime museum at Walsh Bay in Sydney ... The 65 ' ketch Hecla, built for Captain C.C. Dale in 1903, the last wooden ketch to work in South Australi an waters, is now ashore at the Kiplingcotes Fauna and Pioneer Park, Port Lincoln. Her operators seek volunteers to aid in her preservation and restoration.