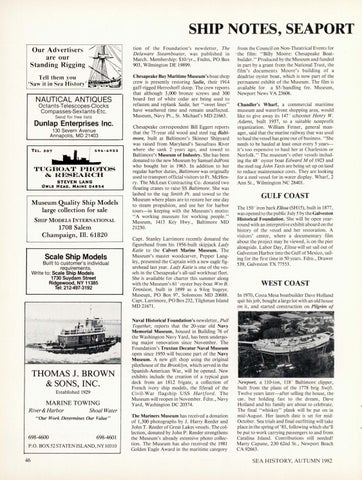 Our Advertisers are our Standing Riggin g Tell th em yo u &#39;Saw it in Sea History&#39;

Chesapeake correspondent Bill Eggert reports that the 75-year old wood and steel tug Baltimore, built at Baltimore&#39;s Skinner Shipyard was raised from Maryland&#39;s Sassafrass Ri ver where she sank 2 years ago, and towed to Baltimore&#39;s Museum of Industry. She has been donated to the new Museum by Samuel duPont who bought her in 1963 . In addition to her regular harbor duties, Baltimore was originally used to transport official visitors to Ft. McHenry. The McLean Contracting Co. donated two floatin g cranes to raise SS Baltimore. She was lashed to the tug Smith Pt . and towed to the Museum where plans are to restore her one day to stea m propulsion, and use her for harbor tours-in keeping with the Museum&#39;s motto: &quot;A working museum for working people.&quot; Museum, 1415 Key Hwy., Baltimore MD 21230. Capt. Stanley Larrimore recently donated the figurehead from his 1956-bu ilt skipjack Lady Katie to the Calvert Marine Museum. The Museum&#39; s master woodcarver, Pepper Langley, presented the Captain with a new eagle figurehead last year. Lady Katie is one of the vessels in the Chesapeake&#39;s all-sail workboat fleet. She is available for charter this summer along with the Museum&#39; s 61 &#39; oyster buy-boat Wm B. Tennison, built in 1899 as a 9-log bugeye. MuseuJ11, PO Box 97, Solomons MD 20688. Capt. Larrimore, PO Box 232, Tilghman Island MD 21671. Naval Historical Foundation&#39;s newsletter, Pull Together, reports that the 20-year old Navy Memorial Museum, housed in Building 76 of the Washington Navy Yard, has been undergoing major renovation since November. The Foundation&#39; s Truxtun Decatur Naval Museum open since 1950 will become part of the Navy Museum. A new gift shop using the original pi lothouse of the Brooklyn, which served in the Spanish-American War, will be opened. New exhibits include the creation of a typical gun deck from an 1812 frigate, a collection of French ivory ship models, the fiferail of the Civ il-W ar flag ship USS Hartford. The Museum will reopen in November. Fdtn ., Navy Yard, Washington DC 20374.

The Mariners Museum has received a donation of 1,300 photographs by J. Harry Reeder and John T. Reeder of Great Lakes vessels. The collection, donated by John P . Reeder strengthens the Museum &#39;s already extensive photo collection . The Museum has also received ·the 1981 Golden Eagle Award in the maritime category

from the Council on Non-Theatrical Events for - the film: &quot;Billy - Moore: Chesapeake Boatbui lder.&quot; Produced by the Museum and funded in part by a grant from the National Trust, the film&#39; s documents Moore&#39;s building of a deadrise oyster boat, which is now part of the permanent exhibit of the Museum . The film is available for a $5 / handling fee. Museum, Newport News VA 23606. Chandler&#39;s Wharf, a commercial maritime museum and waterfront shopping area, would like to give away its 147 &#39; schooner Henry W. Adams, built 1937, to a suitable nonprofit organization. William Fetner, general manager, said that the marine railway that was used to haul the vessel has gone out of business. &quot; She needs to be hauled at least once every 5 yearsit&#39;s too expensive to haul her at Charleston or Norfolk.&quot; The museum&#39; s other vessels including the 48 &#39; oyster boat Edward M of 1923 and the steel tug John Taxis are being set up on land to reduce maintenance costs. They are look ing for a steel vessel for in-water display. Wharf, 2 Ann St. , Wilmington NC 2840 1.

GULF COAST The 150 &#39; iron bark Elissa (SH 15), built in 1877, was opened to the public July 5 by the Galveston Historical Foundation. She will be open yearround with an interpretive exhibit aboard on the history of the vessel and her restoration. A visitors&#39; center, where a documentary film about the project may be viewed, is on the pier alongside. Labor Day, Elissa will set sail out of Galveston Harbor into the Gulf of Mexico, sailing for the first time in 50 years. Fdtn., Drawer 539, Galveston TX 77553.

WEST COAST In 1970, Costa Mesa boatbuilder Dave Holland quit his job, bought a large lot with an old house on it, and started construction on Pilgrim of

Newport, a 1IO-ton, 11 8&#39; Baltimore clipper, built from the plans of the 1778 brig Swift. Twelve years later-after selling the house, the car, but holding fast to the dream, Dave Holland and his fa mily are about to celebrate. The final &quot;whiskey&quot; plank will be put on in mid-August. Her lau nch date is set for midOctober. Sea trials and final outfitting will take place in the spring of &#39;83, following which she&#39;ll be put to work carrying passengers to and from Catalina Island. Contributions still needed! Marty Capune, 2.30 62nd St., Newport Beach CA 92663.