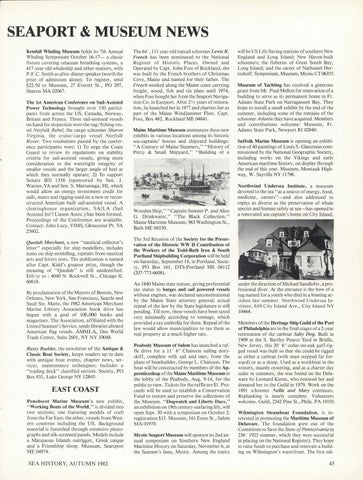 SEAPORT &amp; MUSEUM NEWS Kendall Whaling Museum holds its 7th Annual Whaling Symposium October 16-17- a classic fixture covering cetacean breathing systems, a 417-year old whaleship and other matters, with P.F.C. Smith as after-dinner speaker (worth the price of admi ssion alone). To register, send $22.50 to Museum, 27 Everett St., PO 297, Sharon MA 02067 . The Ist American Conference on Sail-Assisted Power Technology brought over 150 participants from across the US, Canada, Norway, Britain and France. Three sail-assisted vessels on hand for inspection were the tug/fishing vessel Norfolk Rebel, the cargo schooner Sharon Virginia, the cruise/cargo vessel Norfolk Rover. Two resolutions passed by the conference participants were: I) To urge the Coast Guard to review its regulations on stability criteria for sail-assisted vessels, giving more consideration to the watertight integrity of smaller vessels and the larger angle of heel at which they normally operate; 2) To support Senate Bill 1356 (sponsored by Sen. J. Warner,VA and Sen. S. Matsunaga, HI, which would allow an energy investment credit for sails, masts and rigging used on a new or reconstructed American built sail-assisted vessel. A clearinghouse organization, SAlLA (Sail Assisted Int&#39;l Liason Assoc.) has been formed. Proceedings of the Conference are available. Contact: John Lucy, VIMS, Gloucester Pt. VA 23602.

EAST COAST Penobscot Marine Museum&#39;s new exhibit, &quot;Working Boats of the World,&quot; is divided into two sections; one featuring models of craft from the Far East; the other, vessels from Western countries including the US. Background material is furnished through extensive photographs and silk-screened panels. Models include a Marquesas Islands outrigger, Greek caique and a Friendship sloop. Museum, Searsport ME04974.

The 64 &#39;, 111 year-old topsail schooner Lewis R. French has been nominated to the National Regi ster of Hi storic Places. Owned and Operated by Capt. John Foss of Rockland, she was built by the French brothers of Christmas Cove, Maine and named for their father. The French worked along the Maine coast carrying freight, wood, fi sh and tin plate until 1974, when Foss bought her from the Seaport Navigation Co. in Eastport. After 2 Yi years of restoration , he launched her in 1977 and charters her as part of the Maine Windjammer Fleet. Capt. Foss, Box 482, Rockland ME 04841 . Maine Maritime Museum announces these new exhibits in various locations among its historic sea-captains&#39; houses and shipyard buildings: &quot;A Century of Maine Steamers,&quot; &quot;History of Percy &amp; Small Shipyard,&quot; &quot;Building of a

will be US Life-Saving stations of southern New England and Long Island; New Haven-built schooners; the fisheries of Great South Bay, Long Island; and the career of Nathaniel Herreshoff. Symposium, Museum, Mystic CT 06355. Museum of Yachting has received a generous grant from Mr. Paul Mellon for renovation of a building to serve as its permanent home in Ft. Adams State Park on Narragansett Bay. They hope to install a small exhibit by the end of the summer, including some of the remains of the schooner Atlantic they have acquired. Members and contributions welcome: Museum, Ft. Adams State Park, Newport RI 02840. Suffolk Marine Museum is opening an exhibition of 40 paintings of Louis S. Glanzman commissioned by the National Geographic Society, including works on the Vikings and early American maritime history, on display through the end of this year. Museum, Montauk Highway, W. Sayville NY 11796. No rthwind Undersea Institute, a museum devoted to the sea &quot;as a source of energy, food, medicine, careers&quot; -and also addressed to topics as diverse as the preservation of whale species and human safety at sea-has opened in a renovated sea captain &#39;s home on City Island,

The 3rd Reunion of the Society for the Preservation of the Historic WW II Contribution of the Workers of the Todd-Bath Iron &amp; South Portland Shipbuilding Corporation will be held on Saturday, September 18, in Portland. Society, PO Box 161, DTS-Portland ME 04112 (207-773-6608). An 1840 Maine state statute, giving preferential tax status to barges and sail powered vessels without engines, was declared unconstitutional by the Maine State attorney general; actual repeal of the law by the State legislature is still pending. Till now, these vessels have been taxed very minimally according to tonnage, which provided a tax umbrella for them. Repeal of the law would allow municipalities to tax them as real property at a much higher rate. Peabody Museum of Salem has launched a raffle drive for a 11 &#39; 6&quot; Chaisson sailing doryskiff, complete with sail and oars, from the plans of boatbuilder, George L. Chaisson. The boat will be constructed by members of the Apprenticeshop of the Maine Maritime Museum in the lobby of the Peabody, Aug. 9-14, for the public to view. Tickets forthe raffle are $1. Proceeds will be used to establish a Conservation Fund to restore and preserve the collections of the Museum. &quot;Dogwatch and Liberty Days,&quot; an exhibition on 19th century seafaring life, will open Sept. 30 with a symposium on October 2: registration $15. Museum, 161 Essex St., Salem MA 01970. Mystic Seaport Museum will sponsor its 2nd annual symposium on Southern New England Maritime History on Saturday, November 6, at the Seamen&#39;s lnne, Mystic. Among the topics

under the direction of Michael Sand lo fer, a professional diver. At the entrance is the bow of a tug named for a youth who died in a boating accident last summer. Northwind Undersea Institute, 610 City Island Ave., City Island NY 10464. Members of the Heritage Ship Guild of the Port of Philadelphia are in the final stages of a 2-year restoration of the catboat Salty Dog. Built in 1909 at the S. Bartley Pearce Yard in Brielle, New Jersey, this 20 &#39; 6&quot; cedar-on-oak gaff-rigged vessel was built so that she could be rigged as either a catboat (with mast stepped far forward) or as a sloop. Used as a workboat in the winters, mainly oystering, and as a charter day sailer in summers, she was found on the Delaware by Leonard Kiems, who restored her and donated her to the Guild in 1979. Work on the 1891 schooner Nellie and Mary continues. Replanking is nearly complete. Volunteers welcome. Guild, 2342 Pine St., Phila. PA 19103. Wilmington Steamboat Foundation, is interested in promoting the Maritime Museum of Delaware. The foundation grew out of the Committee to Save the State of Pennsylvania (a 236 &#39; 1923 steamer, which they were successfu l in placing on the National Register). They hope to raise funds to purchase and renovate a building on Wilmington&#39;s waterfront. The fir st edi-