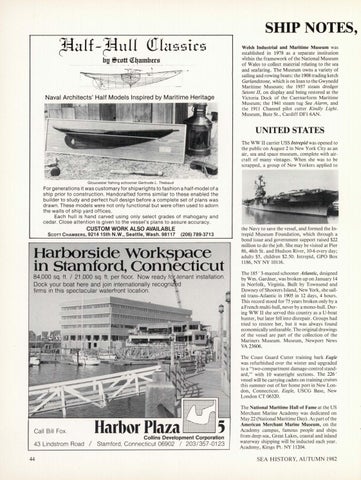 Welsh Industrial and Maritime Museum was established in 1978 as a separate institution within the framework of the National Museum of Wales to collect material relating to the sea and seafaring . The Museum owns a variety of sailing and rowing boats: the 1908 trading ketch Garlands tone, which is on loan to the Gwynedd Maritime Museum; the 1937 steam dredger Seiont II, on display and being restored at the Victoria Dock of the Caernarform Maritime Museum; the 1941 steam tug Sea Alarm, and the 1911 Channel pilot cutter Kindly Light. Museum, Bute St., Cardiff DFl 6AN.

UNITED STATES The WW II carrier USS Intrepid was opened to the public on August 2 in New York City as an air, sea and space museum , complete with aircraft of many vintages. When she was to be scrapped, a group of New Yorkers applied to

For generations it was customary for shipwrights to fashion a half-model of a ship prior to construction. Handcrafted forms similar to these enabled the builder to study and perfect hull design before a complete set of plans was drawn. These models were not only functional but were often used to adorn the walls of ship yard offices. Each hull is hand carved using only select grades of mahogany and cedar. Close attention is given to the vessel &#39;s plans to assure accuracy. CUSTOM WORK ALSO AVAILABLE SCOTT CHAMBERS, 921415th N.W., Seattle, Wash. 98117 (206) 789-3713

the Navy to save the vessel, and formed the Intrepid Museum Foundation, wh ich through a bond issue and government support raised $22 million to do the job. She may be visited at Pier 86, 46th St. and Hudson Ri ver, 10-6 every day; adults $5, children $2.50. Intrepid, GPO Box 1186, NY NY 10116. The 185 &#39; 3-masted schooner Atlantic, designed by Wm. Gardner, was broken up on January 14 in Norfolk, Virginia. Built by Townsend and Downey of Shooters Island, New York, she sailed trans-Atlantic in 1905 in 12 days, 4 hours . This record stood for 75 years broken only by a a French multi-hull, never by a mono-hull. During WW II she served this country as a U-boat hunter, but later fell into disrepair. Groups had tried to restore her, but it was always found economically unfeasable. The original drawings of the vessel are part of the collection of the Mariners Museum. Museum, Newport News VA 23606. The Coast Guard Cutter training bark Eagle was refurbished over the winter and upgraded to a &quot;two-compartment damage-control standard,&quot; with 10 watertight sections. The 226 &#39; vessel will be carrying cadets on training cruises this summer out of her home port in New London, Connecticut. Eagle, USCG Base, New London CT 06320.