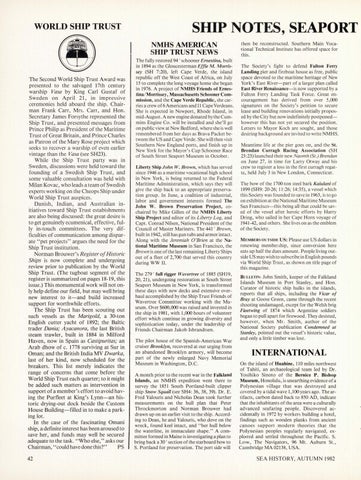 The Second World Ship Trust Award was presented to the salvaged 17th century warship Vasa by King Carl Gustaf of Sweden on April 21, in impressive ceremonies held aboard the ship. Chairman Frank Carr, Mrs. Carr, and Hon. Secretary James Forsythe represented the Ship Trust, and presented messages from Prince Philip as President of the Maritime Trust of Great Britain, and Prince Charles as Patron of the Mary Rose project which seeks to recover a warship of even earlier vintage than the Vasa (see SH23). While the Ship Trust party was in Sweden, discussions were held toward the founding of a Swedish Ship Trust, and some valuable consultation was held with Milan Kovac, who leads a team of Swedish experts working on the Cheops Ship under World Ship Trust auspices. Danish, Indian, and Australian initiatives toward Ship Trust estabishments are also being discussed: the great desire is to get genuinely ecumenical, effective, fully in-touch committees. The very difficulties of communication among disparate &quot;pet projects&quot; argues the need for the Ship Trust institution. Norman Brouwer&#39;s Register of Historic Ships is now complete and undergoing review prior to publication by the World Ship Trust. (The tugboat segment of the register is summarized on pages 18-19, this issue.) This monumental work will not only help define our field, but may well bring new interest to it-and build increased support for worthwhile efforts. The Ship Trust has been scouting out such vessels as the Marigold, a 30-ton English cutter yacht of 1892; the Baltic trader Dania; Ayacanora, the last British steam trawler, built in 1884 in Milford Haven, now in Spain as Castipuritas; an Arab dhow of c. 1778 surviving at Sur in Oman; and the British India MV Dwarka, last of her kind, now scheduled for the breakers. This list merely indicates the range of concerns that come before the World Ship Trust each quarter; to it might be added such matters as intervention in support of a member&#39;s effort to avoid having the Purfleet at King&#39;s Lynn-an historic drying-out dock beside the Custom House Building-filled in to make a parking lot. In the case of the fascinating Omani ship, a definite interest has been aroused to save her, and funds may well be secured adequate to the task. &quot;Who else,&quot; asks our Chairman, &quot;could have done this?&quot; PS 42

The fully restored 94 &#39; schooner Ernestina, built in 1894 as the Gloucesterman Effie M. Morrissey (SH 7:20), left Cape Verde, the island republic off the West Coast of Africa, on July 15 to complete the long voyage home she began in 1976. A project of NMHS Friends of Ernestina/ Morrissey, Massachusetts Schooner Commission, and the Cape Verde Republic, she carries a crew of 6 Americans and 11 Cape Verdeans. She is expected in Newport, Rhode Island, in mid-August. A new engine donated by the Cummins Engine Co. will be installed and she&#39;ll go on public view at New Bedford, where she is well remembered from her days as Brava Packet between the US and Cape Verde. She will then visit Southern New England ports, and finish up in New York for the Mayor&#39;s Cup Schooner Race of South Street Seaport Museum in October. Liberty Ship John W. Brown, which has served since 1946 as a maritime vocational high school in New York, is being returned to the Federal Maritime Administration, wh ich says they will give the ship back to an appropriate preservation group. In June, a coalition of industrial, labor and government interests formed The John W. Brown Preservation Project, cochaired by Mike Gillen of the NMHS Liberty Ship Project and editor of its Liberty Log, and Capt. Conrad Nilsen, National President of the Council of Master Mariners. The 441 &#39; Brown, built in 1942, still has gun tubs and armor intact. Along with the Jeremiah O&#39;Brien at the National Maritime Museum in San Francisco, the Brown is one of the last remaining Liberty Ships out of a fleet of 2,700 that served this country during WW II. The 279 &#39; full rigger Wavertree of 1885 (SHl9, 20, 21), undergoing restoration at South Street Seaport Museum in New York, is transformed these days with new decks and extensive overhaul accomplished by the Ship Trust Friends of Wavertree Committee working with the Museum. Over $600,000 was raised and invested in the ship in 1981, with 1,000 hours of volunteer effort which continue in growing diversity and sophistication today, under the leadership of Friends Chairman Jakob lsbrandtsen. The pilot house of the Spanish-American War cruiser Brooklyn, recovered at our urging from an abandoned Brookl yn armory, will become part of the newly enlarged Navy Memorial Museum in Washington, D. C. A month prior to the recent war in the Falkland Islands, an NMHS expedition went there to survey the 1851 South Portland-bui lt clipper ship Snow Squall (see SH4: 36, 38, 39). Dr. E . Fred Yalouris and Nicholas Dean took further measurements on the hull plan that Peter Throckmorton and Norman Brouwer had drawn up on an earlier visit to the ship . According to Dean, he and Yalouris, who dove on the wreck, found keel intact, and &quot;her hull below the waterline, in immaculate shape.&quot; A committee formed in Maine is investigating a plan to bring back a 30 &#39; section of the starboard bow to S. Portland for preservation. The port side will

then be reconstructed. Southern Main VocaÂˇtional Technical Institute has offered space for this. The Society&#39;s fight to defend Fulton Ferry Landing pier and fireboat house as free, public space devoted to the maritime heritage of New York&#39;s East River-part of a larger plan called East River Renaissance-is now supported by a Fulton Ferry Landing Task Force. Great encouragement has derived from over 5,000 signatures on the Society&#39;s petition to secure lease and building renovations initially proposed by the City but now indefinitely postponedhowever this has not yet secured the position. Letters to Mayor Koch are sought, and those desiring background are invited to write NMHS. Meantime life at the pier goes on, and the St. Brendan Curragh Racing Association (SH 23:23) launched their new Naomh (St .) Brendan on June 27, in time for Larry Otway and hi s crew to register a loss in the first curragh regatta, held July 3 in New London, Connecticut. The bow of the l 700-ton steel bark Kaiulani of 1899 (SH9: 20-26; 11 :26; 14:35), a vessel which this Society was founded to save in 1963, is to go on exhibition at the National Maritime Museum San Francisco-this being all that could be saved of the Âˇvessel after heroic efforts by Harry Dring, who sailed in her Cape Horn voyage of 1941-42, and others. She lives on as the emblem of the Society. MEMBERS OUTSIDE US: Please use us dollars in renewing membership, since conversion here eats up half the dues amount. People living outside US may wish to subscribe in English pounds via World Ship Trust, as shown on title page of this magazine. BULLETIN: John Smith, keeper of the Falkland Islands Museum in Port Stanley, and Hon. Curator of historic ship hulks in the islands, reports that all ships, including the Vicar of Bray at Goose Green, came through the recent shooting undamaged, except for the Welsh brig Fleetwing of 1874 which Argentine soldiers began to pull apart for firewood. They desisted, however, when Mr. Smith, author of the National Society publication Condemned at Stanley, pointed out the vessel&#39;s historic value, and only a little timber was lost.

INTERNATIONAL On the island of Huahine, 110 miles northwest of Tahiti, an archaeological team led by Dr. Yosihiko Sinoto of the Bernice P. Bishop Museum, Honolulu, is unearthing evidence of a Po lynesian village that was destroyed and covered by a tidal wave I ,IOOyears ago. The artifacts, carbon dated back to 850 AD, indicate that the inhabitants of the area were a culturall y advanced seafa ring people. Discovered accidentally in 1972 by workers building a hotel, findings such as wooden planks from ancient canoes support modern theories that the PoAynesian peoples regularly navigated, explo1red and settled throughout the Pacific. S. L01w, The Navigators, 96 Mt. Auburn St., Carmbridge MA 02138, USA.