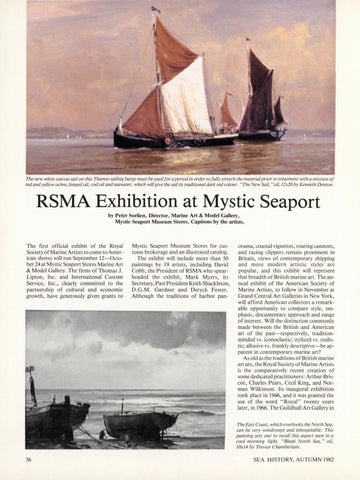 The new while canvas sail on !his Thames sailing barge mus/ be usedforaperiod in order lofullyslrelch lhemalerial prior lo lrealmenl with a mixture of red and yellow ochre, linseed oil, cod oil and sea waler, which will give !he sail its /radilional dark red colour. &quot;The New Sail,&quot; oil, 12x20 by Kenneth Denton.

The first official exhibit of the Royal Society of Marine Artists to come to American shores will run September 12-0ctober 24 at Mystic Seaport Stores Marine Art &amp; Model Gallery. The firms of Thomas J. Lipton, Inc. and International Custom Service, Inc., clearly committed to the partnership of cultural and economic growth, have generously given grants to

Mystic Seaport Museum Stores for customs brokerage and an illustrated catalog . The exhibit will include more than 50 paintings by 19 artists, including David Cobb, the President of RSMA who spearheaded the exhibit, Mark Myers, its Secretary, Past President Keith Shackleton, D.G.M. Gardner and Deryck Foster. Although the traditions of harbor pan-

orama, coastal vignettes, roaring cannons, and racing clippers remain prominent in Britain, views of contemporary shipping and more modern artistic stylesÂˇ are popular, and this exhibit will represent that breadth of British marine art. The annual exhibit of the American Society of Marine Artists, to follow in November at Grand Central Art Galleries in New York, will afford American collectors a remarkable opportunity to compare style, emphasis, documentary approach and range of interest. Wi ll the distinction commonly made between the British and American art of the past-respectively, traditionminded vs. iconoclastic; stylized vs. realistic; allusive vs. frankly descriptive-be apparent in contemporary marine art? As old as the traditions of British marine art are, the Royal Society of Marine Artists is the comparatively recent creation of some dedicated practitioners: Arthur Briscoe, Charles Pears, Cecil King, and Norman Wilkinson. Its inaugural exhibition took place in 1946, and it was granted the use of the word &quot;Royal&quot; twenty years later, in 1966. The Guildhall Art Gallery in The Easl Coos!, which overlooks !he Norlh Sea, can be very windswept and inhospitable. This painting sets out to recall this aspect seen in a cool morning light. &quot; Bleak North Sea,&quot; oil, 10xl4 by Tre v1or Chamberlain.