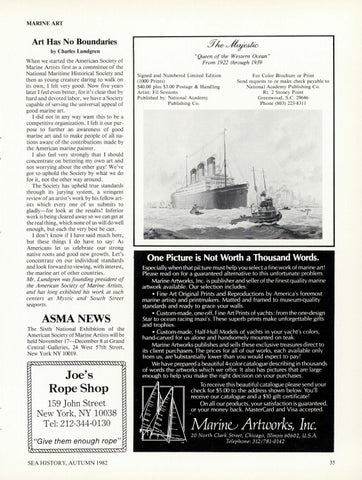 Art Has No Boundaries by Charles Lundgren

When we started the American Society of Marine Artists first as a committee of the National Maritime Historical Society and then as young creature daring to walk on its own, I felt very good. Now five years later I feel even better, for it &#39;s clear that by hard and devoted labor, we have a Society capable of serving the universal appeal of good marine art. I did not in any way want this to be a competitive organization. I felt it our purpose to further an awareness of good marine art and to make people of all nations aware of the contributions made by the American marine painter. I also feel very strongly that I should concentrate on bettering my own art and not worrying about the other guy! We&#39;ve got to uphold the Society by what we do for it, not the other way around. The Society has upheld true standards through its jurying system, a stringent review of an artist&#39;s work by his fellow artists which every one of us submits to gladly-for look at the results! Inferior work is being cleared away so we can get at the real th ing, which none of us will do well enough, but each the very best he can . I don&#39;t know if I have said much here, but these things I do have to say: As Americans let us celebrate our strong native roots and good new growth . Let&#39;s concentrate on our individual standards and look forward to viewing, with interest, the marine art of other countries.

&quot;Queen of the Western Ocean&quot; From 1922 through 1939 Signed and Numbered Limited Editi on (I 000 Prints) $40.00 plus $3.00 Postage &amp; Handling Artist: Fil Sessions Published by: National Academy Publishing Co.

Mr. Lundgren was founding president of the American Society of Marine Artists, and has long exhibited his work at such centers as Myst ic and South Street seaports.