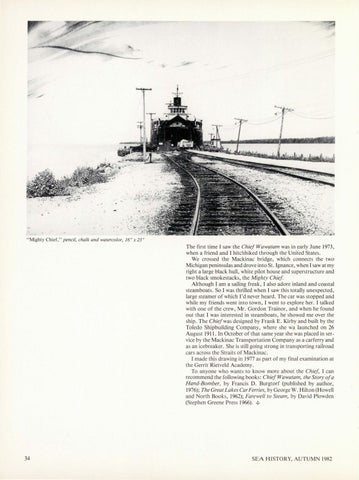 The first time I saw the Chief Wawatam was in early June 1973, when a friend and I hitchhiked through the United States. We crossed the Mackinac bridge, which connects the two Michigan peninsulas and drove into St. lgnance, when I saw at my right a large black hull, white pilot house and superstructure and two black smokestacks, the Mighty Chief Although I am a sailing freak, I also adore inland and coastal steamboats. So I was thrilled when I saw this totally unexpected, large steamer of which I&#39;d never heard. The car was stopped and while my friends went into town, I went to explore her. I talked with one of the crew, Mr. Gordon Trainor, and when he found out that I was interested in steamboats, he showed me over the ship . The Chief was designed by Frank E. Kirby and built by the Toledo Shipbuilding Company, where she wa launched on 26 August 1911. In October of that same year she was placed in service by the Mackinac Transportation Company as a carferry and as an icebreaker. She is still going strong in transporting railroad cars across the Straits of Mackinac. I made this drawing in 1977 as part of my final examination at the Gerrit Rietveld Academy. To anyone who wants to know more about the Chief, I can recommend the following books: Chief Wawatam, the Story of a Hand-Bomber, by Francis D . Burgtorf (published by author, 1976); The Great Lakes Car Ferries, by George W. Hilton (Howell and North Books, 1962); Farewell to Steam, by David Plowden (Stephen Greene Press 1966). w