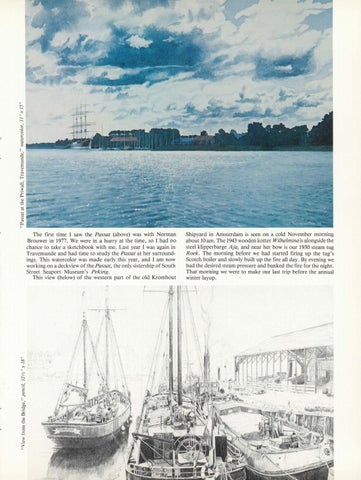 The first time I saw the Passat (above) was with Norman Brouwer in 1977. We were in a hurry at the time, so I had no chance to take a sketchbook with me. Last year I was again in Travemunde and had time to study the Passat at her surroundings. This watercolor was made early this year, and I am now working on a deckview of the Passat, the only sistership of South Street Seaport Museum's Peking. This view (below) of the western part of the old Kromhout

Shipyard in Amsterdam is seen on a cold November morning about 10 am. The 1943 wooden kotter Wilhelmina is alongside the steel klipperbarge Aja, and near her bow is our 1930 steam tug Roek. The morning before we had started firing up the tug's Scotch boiler and slowly built up the fire all day. By evening we had the desired steam pressure and banked the fire for the night. That morning we were to make our last trip before the annual winter layup.