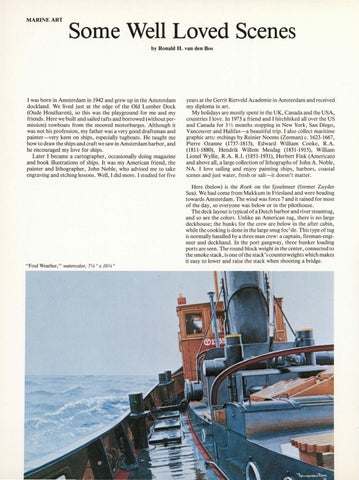 I was born in Amsterdam in 1942 and grew up in the Amsterdam dockland. We lived just at the edge of the Old Lumber Dock (Oude Houthaven), so this was the playgr.ound for me and my friends. Here we built and sailed rafts and borrowed (without permission) rowboats from the moored motorbarges. Although it was not his profession, my father was a very good draftsman and painter-very keen on ships, especially tugboats. He taught me how to draw the ships and craft we saw in Amsterdam harbor, and he encouraged my love for ships. Later I became a cartographer, occasionally doing magazine and book illustrations of ships. It was my American friend, the painter and lithographer, John Noble, who advised me to take engraving and etching lessons. Well, I did more. I studied for five

years at the Gerrit Rietveld Academie in Amsterdam and received my diploma in art. My holidays are mostly spent in the UK, Canada and the USA, countries I love. In 1973 a friend and I hitchhiked all over the US and Canada for 3 Yi months stopping in New York, San Diego, Vancouver and Halifax-a beautiful trip. I also collect maritime graphic arts: etchings by Reinier Nooms (Zeeman) c. 1623-1667, Pierre Ozanne (1737-1813), Edward William Cooke, R.A. (1811-1880), Hendrik Willem Mesdag (1831-1915), William Lionel Wyllie, R.A. R.I. (1851-1931), Herbert Fink (American) and above all, a large collection of lithographs of John A. Noble, NA. I love sailing and enjoy painting ships, harbors, coastal scenes and just water, fresh or salt-it doesn&#39;t matter. Here (below) is the Roek on the Ijsselmeer (former Zuyder Sea). We had come from Makkum in Friesland and were heading towards Amsterdam. The wind was force 7 and it rained for most of the day, so everyone was below or in the pilothouse. The deck layout is typical of a Dutch harbor and river steam tug, and so are the colors. Unlike an American tug, there is no large deckhouse; the bunks for the crew are below in the after cabin, while the cooking is done in the large snug foc&#39;sle. This type oftug is normally handled by a three man crew: a captain, fireman-engineer and deckhand. In the port gangway, three bunker loading ports are seen. The round block weight in the center, connected to the smoke stack, is one of the stack&#39;s counterweights which makes it easy to lower and raise the stack when shooting a bridge.