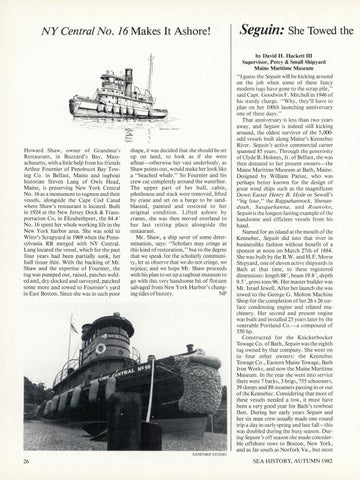 NY Central No. 16 Makes It Ashore!

Howard Shaw, owner of Grandma&#39;s Restaurant, in Buzzard&#39; s Bay, Massachusetts, with a little help from his friends Arthur Fournier of Penobscot Bay Towing Co. in Belfast, Maine and tugboat historian Steven Lang of Owls Head, Maine, is preserving New York Central No. 16 as a monument to tugmen and their vessels, alongside the Cape Cod Canal where Shaw&#39;s restaurant is located . Built in 1924 at the New Jersey Dock &amp; Transportation Co, in Elizabethport, the 84.4&#39; No. 16 spent her whole working life in the New York harbor area. She was sold to Witte&#39;s Scrapyard in 1969 when the Pennsylvania RR merged with NY Central. Lang located the vessel, which for the past four years had been partially sunk, her hull tissue thin. With the backing of Mr. Shaw and the expertise of Fournier, the tug was pumped out, raised, patches welded and, dry-docked and surveyed, patched some more and towed to Fournier&#39;s yard in East Boston. Since she was in such poor

shape, it was decided that she should be set up on land , to look as if she were afloat-otherwise her vast underbody, as Shaw points out, would make her look like a &quot;beached whale .&quot; So Fournier and his crew cut completely around the waterline. The upper part of her hull, cabin, pilothouse and stack were removed, lifted by crane and set on a barge to be sandblasted, painted and restored to her original condition . Lifted ashore by cranes, she was then moved overland to her last resting place alongside the restaurant. Mr. Shaw, a ship saver of some determination, says: &quot;Scholars may cringe at this kind of restoration,&quot; but to the degree that we speak for the scholarly community, let us observe that we do not cringe, we rejoice; and we hope Mr. Shaw proceeds with his plan to set up a tugboat museum to go with this very handsome bit of flotsam salvaged from New York Harbor&#39;s changNP ing tides of history .

&quot;I guess the Seguin will be kicking around on the job when some of these fancy modern tugs have gone to the scrap pile,&quot; said Capt. Goodwin F. Mitchell in 1946 of his sturdy charge. &quot;Why, they&#39;ll have to plan on her lOOth launching anniversary one of these days.&#39;&#39; That anniversary is less than two years away, and Seguin is indeed still kicking around, the oldest survivor of the 5,000odd vessels built along Maine&#39;s Kennebec River. Seguin &#39;s active commercial career spanned 85 years. Through the generosity of Clyde B. Holmes, Jr. of Belfast, she was then donated to her present owners-the Maine Maritime Museum at Bath, Maine . Designed by William Pattee, who was perhaps better known for the design of great wind ships such as the magnificent Down Easter Henry B. Hyde or Sewall&#39;s &quot;big four,&quot; the Rappahannock, Shenandoah , Susquehanna, and Roanoke, Seguin is the longest-lasting example of the handsome and efficient vessels from his hand . Named for an island at the mouth of the Kennebec, Seguin slid into that river in businesslike fashion without benefit of a sponsor at noon on March 27th of 1884. She was built by the B. W. and H.F. Morse Shipyard, one of eleven active shipyards in Bath at that time, to these registered dimensions: length 88 &#39;,beam 19.8 &#39;, depth 9. 5 &#39;, gross tons 96. Her master builder was Mr. Israel Jewell. After her launch she was towed to the George G. Molton Machine Shop for the completion of her 26 x 26 surface condensing engine and related machinery. Her second and present engine was built and installed 25 years later by the venerable Portland Co.-a compound of 350 hp . Constructed for the Knickerbocker TowageCo. of Bath, Seguin was theeighth tug owned by that company. She went on to four other owners: the Kennebec Towage Co ., Eastern Maine Towage, Bath Iron Works, and now the Maine Maritime Museum. In the year she went into service there were 7 barks, 3 brigs, 755 schooners, 39 sloops and 88 steamers passing in or out of the Kennebec . Considering that most of these vessels needed a tow, it must have been a very good year for Bath&#39;s towboat fleet. During her early years Seguin and her six man crew usually made one round trip a day in early spring and late fall-this was doubled during the busy season. During Seguin &#39;s off season she made considerble offshore tows to Boston, New York, and as far south as Norfork Va ., but most