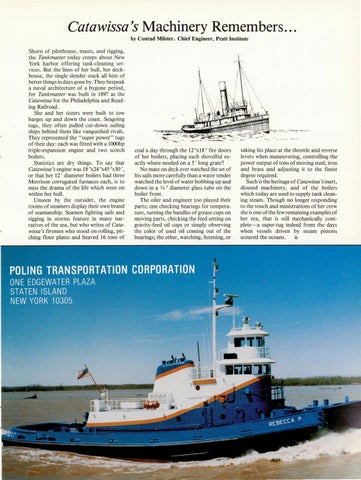 Catawissa&#39;s Machinery Remembers ... by Conrad Milster, Chief Engineer, Pratt Institute Shorn of pilothouse, masts, and rigging, the Tankmaster today creeps about New York harbor offering tank-cleaning services. But the lines of her hull, her deckhouse, the single slender stack all hint of better things in days gone by. They bespeak a naval architecture of a bygone period, for Tankmaster was built in 1897 as the Catawissa for the Philadelphia and Reading Railroad. She and her sisters were built to tow barges up and down the coast. Seagoing tugs, they often pulled cut-down sailing ships behind them like vanguished rivals. They represented the &quot;super power&quot; tugs of their day: each was fitted with a lOOOhp triple-expansion engine and two scotch boilers. Statistics are dry things. To say that Catawissa &#39;s engine was 18 &quot;x24 &quot;x45 &quot;x30 &quot;, or that her 12&#39; diameter boilers had three Morrison corru~ated furnaces each, is to miss the drama of the life which went on within her hull. Unseen by the outsider, the engine rooms of steamers display their own brand of seamanship. Seamen fighting sails and rigging in storms feature in many narratives of the sea, but who writes of Catawissa&#39;s firemen who stood on rolling, pitching floor plates and heaved 16 tons of

coal a day through the 12 &quot;x18&quot; fire doors of her boilers, placing each shovelful exactly where needed on a 5 &#39; long grate? No mate on deck ever watched the set of his sails more carefully than a water tender watched the level of water bobbing up and down in a V4 &quot; diameter glass tube on the boiler front. The oiler and engineer too played their parts; o_ne checking bearings for temperature, turning the handles of grease cups on moving parts, checking the feed setting on gravity-feed oil cups or simply observing the color of used oil corning out of the bearings; the other, watching, listening, or

taking his place at the throttle and reverse levers when maneuvering, controlling the power output of tons of moving steel, iron and brass and adjusting it to the finest degree required. Such is the heritage of Catawissa&#39;sinert, disused machinery, and of the boilers which today are used to supply tank cleaning steam. Though no longer responding to the touch and ministrations of her crew she is one of the few remaining examples of her era, that is still mechanically complete-a super-tug indeed from the days when vessels driven by steam pistons scoured the oceans. w