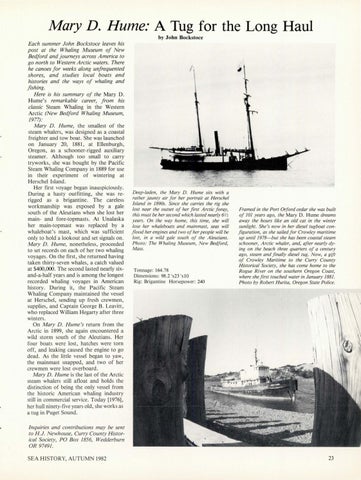 Mary D. Hume: A Tug for the Long Haul by John Bockstoce

Each summer John Bockstoce leaves his post at the Whaling Museum of New Bedford and journeys across America to go north to Western Arctic waters. There he canoes for weeks along unfrequented shores, and studies local boats and histories and the ways of whaling and fishing. Here is his summary of the Mary D. Hume&#39;s remarkable career, from his classic Steam Whaling in the Western Arctic (New Bedford Whaling Museum,

Mary D. Hume, the smallest of the steam whalers, was designed as a coastal freighter and tow boat. She was launched on January 20, 1881, at Ellenburgh, Oregon, as a schooner-rigged auxiliary steamer. Although too small to carry tryworks, she was bought by the Pacific Steam Whaling Company in 1889 for use in their experiment of wintering at Herschel Island . Her first voyage began inauspiciously. During a hasty outfitting, she was rerigged as a brigantine. The careless workmanship was exposed by a gale south of the Aleutians when she lost her main- and fore-topmasts. At Unalaska her main-topmast was replaced by a whaleboat&#39;s mast, which was sufficient on ly to hold a lookout and set signals on . Mary D. Hume, nonetheless, proceeded to set records on each of her two whaling voyages. On the first, she returned having taken thirty-seven whales, a catch valued at $400,000. The second lasted nearly sixand-a-half years and is among the longest recorded whaling voyages in American history. During it, the Pacific Steam Whaling Company maintained the vessel at Herschel, sending up fresh crewmen, supplies, and Captain George B. Leavitt, who replaced William Hegarty after three winters. On Mary D. Hume&#39;s return from the Arctic in 1899, she again encountered a wild storm south of the Aleutians. Her four boats were lost, hatches were torn off, and leaking caused the engine to go dead. As the little vessel began to yaw, the mainmast snapped, and two of her crewmen were lost overboard. Mary D. Hume is the last of the Arctic steam whalers still afloat and holds the distinction of being the only vessel from the historic American whaling industry still in commercial service. Today (1976), her hull ninety-five years old, she works as a tug in Puget Sound.

Deep-laden, the Mary D. Hume sits with a rather jaunty air for her portrait at Herschel Island in 1890s. Since she carries the rig she lost near the outset of her first Arctic foray, this must be her second which lasted nearly 6!/i years. On the way home, this time, she will lose her whaleboats and mainmast, seas will flood her engines and two of her people will be lost, in a wild gale south of the Aleutians. Photo: The Whaling Museum, New Bedford, Mass.

Framed in the Port Orford cedar she was built of JOI years ago, the Mary D. Hume dreams away the hours like an old cat in the winter sunlight. She&#39;s now in her diesel tugboat configuration, as she sailed for Crowley maritime up until 1978-but she has been coastal steam schooner, Arctic whaler, and, after nearly dying on the beach three quarters of a century ago, steam and finally diesel tug. Now, a gift of Crowley Maritime to the Curry County Historical Society, she has come home to the Rogue River on the southern Oregon Coast, where she first touched water in January 1881 . Photo by Robert Hurita, Oregon State Police.