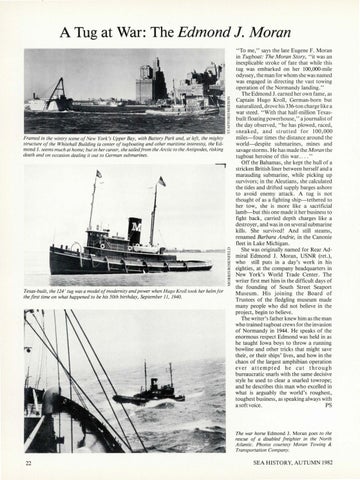 A Tug at War: The Edmond J. Moran

Framed in the wintry scene of New York &#39;s Upper Bay, with Battery Park and, ai left, the mighty structure of the Whitehall Building (a center of tugboating and other maritime interests), the Edmond 1. seems much at home; but in her career, she sailed from the Arctic to the Antipodes, risking death and on occasion dealing it out to German submarines.

Texas-built, the 124&#39; tug was a model of modernity and power when Hugo Kroll took her helm for the first time on what happened to be his 50th birthday, September 11, 1940.

&quot;To me,&quot;&#39; says the late Eugene F. Moran in Tugboat: The Moran Story, &quot;it was an inexplicable stroke of fate that while this tug was embarked on her 100,000-mile odyssey, the man for whom she was named was engaged in directing the vast towing operation of the Normandy landing. &quot; The Edmond J. earned her own fame, as Captain Hugo Kroll, German-born but naturalized, drove his 336-ton charge like a war steed . &quot;With that half-m illion Texasbuilt floating powerhouse,&#39;&#39; a journalist of the day observed, &quot;he has plowed, raced, sneaked, and strutted for 100,000 miles-four times the distance around the world-despite submarines, mines and savage storms. He has made the Moran the tugboat heroine of this war . ... &#39;&#39; Off the Bahamas, she kept the hull of a stricken British liner between herself and a marauding submarine, while picking up survivors; in the Aleutians, she calculated the tides and drifted supply barges ashore to avoid enemy attack. A tug is not thought of as a fighting ship-tethered to her tow, she is more like a sacrificial lamb-but this one made it her business to fight back , carried depth charges like a destroyer , and was in on several submarine kills. She survived! And still steams, renamed Barbara Andrie, in the Canonie fleet in Lake Michigan . She was originally named for Rear Admiral Edmond J . Moran, USNR (ret.), who still puts in a day&#39;s work in his eighties, at the company headquarters in New York&#39;s World Trade Center. The

writer first met him in the difficult days of the founding of South Street Seaport Museum. Hi s joining the Board of Trustees of the fledgling museum made many people who did not believe in the project, begin to believe. The writer&#39;s fat her knew him as the man who trained tugboat crews for the invasion of Normandy in 1944. He speaks of the enormous respect Edmond was held in as he taught Iowa boys to throw a running bowline and other tricks that might save their, or their ships&#39; lives, and how in the chaos of the largest amphibian operation eve r attempted h e cut through bureaucratic snarls with the same decisive style he used to clear a snarled towrope; and he describes this man who excelled in what is arguably the world&#39;s roughest, toughest business, as speaking always with PS a soft voice.