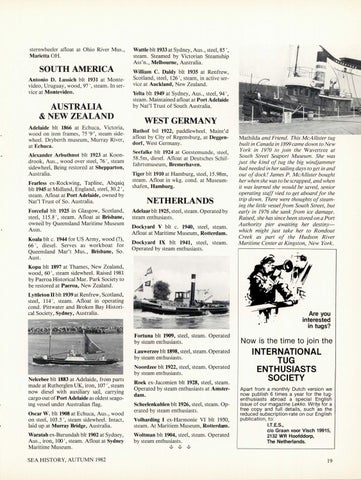 Mathilda and Friend. This McAllister tug built in Canada in 1899 came down to New York in 1970 to join the Wavertree at South Street Seaport Museum . She was just the kind of tug the big windjammer had needed in her sailing days to get in and out of dock! James P. McAllister bought her when she was to be scrapped, and when it was learned she would be saved, senior operating staff vied to get aboard for the trip down. There were thoughts of steaming the little vessel from South Street, but early in 1976 she sank from ice damage. Raised, she has since been stored on a Port Authority pier awaiting her destiny which might just take her to Rondout Creek as part of the Hudson River Maritime Center at Kingston, New York.

Are you interested in tugs? Fortuna bit 1909, steel, steam. Operated

Now is the time to join the

INTERNATIONAL TUG ENTHUSIASTS SOCIETY Apart from a monthly Dutch version we now publish 6 times a year for the tugenthusiasts abroad a special English issue of our magazine Lekko. Write for a free copy and full details, such &#39;as the reduced subscription-rate on our English publication , to: l.T.E.S.,