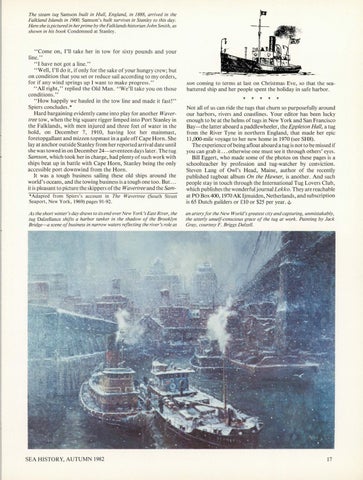 The steam tug Samson built in Hull, England, in 1888, arrived in the Falkland Islands in 1900. Samson&#39;s hulk survives in Stanley to this day. Here she is pictured in her prime by the Falklands historian John Smith, as shown in his book Condemned at Stanley.

&quot;Come on, I&#39;ll take her in tow for sixty pounds and your line.&quot; &quot;I have not got a line.&quot; &quot;Well, I&#39;ll do it, if only for the sake of your hungry crew; but on condition that you set or reduce sail according to my orders, for if any wind springs up I want to make progress.&quot; &quot;All right,&quot; replied the Old Man. &quot;We&#39;ll take you on those conditions.&#39;&#39; &quot;How happily we hauled in the tow line and made it fast!&quot; Spiers concludes.* Hard bargaining evidently came into play for another Wavertree tow , when the big sq uare rigger limped into Port Stanley in the Falklands, with men injured and three feet of water in the hold, on December 7, 1910, having lost her mainmast, foretopgallant and mizzen topmast in a gale off Cape Horn. She lay at anchor outside Stanley from her reported arrival date until she was towed in on December 24-seventeen days later . The tug Samson, which took her in charge, had plenty of such work with ships beat up in battle with Cape Horn, Stanley being the only accessible port downwind from the Horn. It was a tough business sailing these old ships around the world&#39;s oceans, and the towing business is a tough one too. But. .. it is pleasant to picture the skippers of the Wavertree and the Sam*Adapted from Spiers&#39;s account in The Wavertree (South Street

son coming to terms at last on Christmas Eve, so that the seabattered ship and her people spent the holiday in safe harbor.

Not all of us can ride the tugs that churn so purposefully around our harbors, rivers and coastlines. Your editor has been lucky enough to be at the helms of tugs in New York and San Francisco Bay-the latter aboard a paddlewheeler, the Epple/on Hall, a tug from the River Tyne in northern England, that made her epic 11,000-mile voyage to her new home in 1970 (see SH8). The experience of being afloat aboard a tug is not to be missed if you can grab it ... otherwise one must see it through others&#39; eyes. Bill Eggert, who made some of the photos on these pages is a schoolteacher by profession and tug-watcher by conviction. Steven Lang of Owl&#39;s Head, Maine, author of the recently published tugboat album On the Hawser, is another. And such people stay in touch through the International Tug Lovers Club, which publishes the wonderful journal Lekko. They are reachable at PO Box 400, 1970 AK ljmuiden, Netherlands, and subscription is 65 Dutch guilders or ÂŁ10 or $25 per year. .V

As the short winter&#39;s day draws to its end over New York&#39;s East River, the tug Dalzellance shifts a harbor tanker in the shadow of the Brooklyn Bridge-a scene of business in narrow waters reflecting the river&#39;s role as

an artery for the New World&#39;s greatest city and capturing, unmistakably, the utterly unselj-conscious grace of the tug at work. Painting by Jack Gray, courtesy F. Briggs Dalzell.