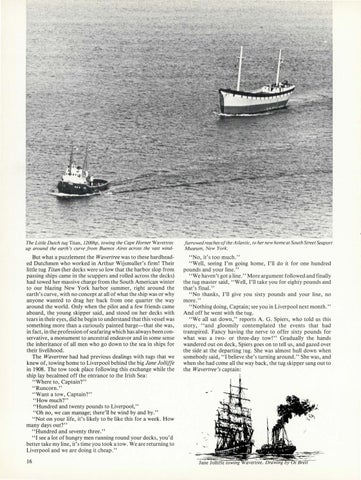 The Little Dutch tug Titan, 1200hp, towing the Cape Horner Wavertree up around the earth&#39;s curve from Buenos Aires across the vast wind-

furrowed reaches of the Atlantic, to her new home at South Street Seaport Museum, New York.

But what a puzzlement the Wavertree was to these hardheaded Dutchmen who worked in Arthur Wijsmuller&#39;s firm! Their little tug Titan (her decks were so low that the harbor slop from passing ships came in the scuppers and rolled across the decks) had towed her massive charge from the South American winter to our blazing New York harbor summer, right around the earth&#39;s curve, with no concept at all of what the ship was or why anyone wanted to drag her back from one quarter the way around the world. Only when the pilot and a few friends came aboard, the young skipper said, and stood on her decks with tears in their eyes, did he begin to understand that this vessel was something more than a curiously painted barge-that she was, in fact, in the profession of seafaring which has always been conservative, a monument to ancestral endeavor and in some sense the inheritance of all men who go down to the sea in ships for their livelihood. The Wavertree had had previous dealings with tugs that we knew of, towing home to Liverpool behind the big Jane Jolliffe in 1908. The tow took place following this exchange while the ship lay becalmed off the entrance to the Irish Sea: &quot;Where to, Captain?&quot; &#39;&#39;Runcorn.&#39;&#39; &quot;Want a tow, Captain?&quot; &quot;How much?&quot; &quot;Hundred and twenty pounds to Liverpool,&quot; &quot;Oh no, we can manage; there&#39;ll be wind by and by.&quot; &quot;Not on your life, it&#39;s likely to be like this for a week. How many days out?&quot; &quot;Hundred and seventy three.&quot; &quot;I see a lot of hungry men running round your decks, you&#39;d better take my line, it&#39;s time you took a tow. We are returning to Liverpool and we are doing it cheap.&quot;

&quot;No, it&#39;s too much.&quot; &quot;Well, seeing I&#39;m going home, I&#39;ll do it for one hundred pounds and your line.&quot; &quot;We haven&#39;t got a line.&quot; More argument followed and finally the tug master said, &quot;Well, I&#39;ll take you for eighty pounds and that&#39;s final.&quot; &quot;No thanks, I&#39;ll give you sixty pounds and your line, no more.&quot; &#39;&#39;Nothing doing, Captain; see you in Liverpool next month.&#39;&#39; And off he went with the tug. &quot;We all sat down,&quot; reports A. G. Spiers, who told us this story, &quot;and gloomily contemplated the events that had transpired. Fancy having the nerve to offer sixty pounds for what was a two- or three-day tow!&quot; Gradually the hands wandered out on deck, Spiers goes on to tell us, and gazed over the side at the departing tug. She was almost hull down when somebody said, &quot;I believe she&#39;s turning around.&quot; She was, and when she had come all the way back, the tug skipper sang out to the Wavertree&#39;s captain: