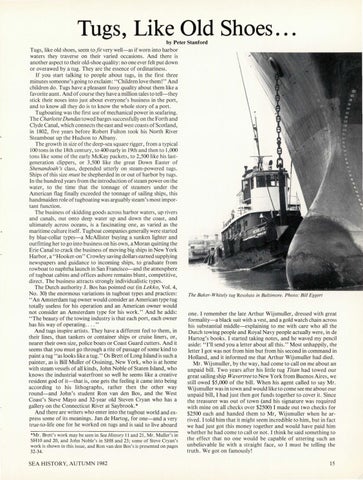 by Peter Stanford Tugs, like old shoes, seem to fit very well-as if worn into harbor waters they traverse on their varied occasions. And there is another aspect to their old-shoe quality: no one ever felt put down or overawed by a tug. They are the essence of ordinariness. If you start talking to people about tugs, in the first three minutes someone&#39;s going to exclaim: &quot;Children love them!&quot; And children do. Tugs have a pleasant fussy quality about them like a favorite aunt. And of course they have a million tales to tell-they stick their noses into just about everyone&#39;s business in the port, and to know all they do is to know the whole story of a port. Tugboating was the first use of mechanical power in seafaring. The Charlotte Dundas towed barges successfully on the Forth and Clyde Canal, which connects the east and west coasts of Scotland, in 1802, five years before Robert Fulton took his North River Steamboat up the Hudson to Albany. The growth in size of the deep-sea square rigger, from a typical I00 tons in the 18th century, to 400 early in 19th and then to 1,000 tons like some of the early McKay packets, to 2,500 like his lastgeneration clippers, or 3,500 like the great Down Easter of Shenandoah&#39;s class, depended utterly on steam-powered tugs. Ships of this size must be shepherded in or out of harbor by tugs. In the hundred years from the introduction of steam power on the water, to the time that the tonnage of steamers under the American flag finally exceeded the tonnage of sailing ships, this handmaiden role of tugboating was arguably steam&#39;s most important function. The business of skidding goods across harbor waters, up rivers and canals, out onto deep water up and down the coast, and ultimately across oceans, is a fascinating one, as varied as the maritime culture itself. Tugboat companies generally were started by blue-collar types-a McAllister buying a sunken lighter and outfitting her to go into business on his own, a Moran quitting the Erie Canal to crack the business of moving big ships in New York Harbor, a &quot;Hooker-on&quot; Crowley saving dollars earned supplying newspapers and guidance to incoming ships, to graduate from rowboat to naphtha launch in San Francisco-and the atmosphere of tugboat cabins and offices ashore remains blunt, competitive, direct. The business attracts strongly individualistic types. The Dutch authority J . Bos has pointed out (in Lekko, Vol. 4, No. 30) the enormous variations in tugboat types and practices: The Baker-Whitely tug Resolute in Baltimore. Photo: Bill Egger/ &#39;&#39;An Amsterdam tug owner would consider an American type tug totally useless for his operation and an American owner would not consider an Amsterdam type for his work.&quot; And he adds: one. I remember the late Arthur Wijsmuller, dressed with great &quot;The beauty of the towing industry is that each port, each owner formality-a black suit with a vest, and a gold watch chain across has his way of operating .... &quot; his substantial middle-explaining to me with care who all the And tugs inspire artists. They have a different feel to them, in Dutch towing people and Royal Navy people actually were, in de their lines, than tankers or container ships or cruise liners, or, Hartog&#39;s books. I started taking notes, and he waved my pencil nearer their own size, police boats or Coast Guard cutters. And it aside: &quot;I&#39;ll send you a letter about all this.&quot; Most unhappily, the seems that you must go through a rite of passage of some kind to letter I got was not from him but from his second in command in paint a tug&#39; &#39;as looks like a tug.&#39;&#39; Os Brett of Long Island is such a Holland, and it informed me that Arthur Wijsmuller had died. painter, as is Bill Muller of Ossining, New York, who is at home Mr. Wijsmuller, by the way, had come to call on me about an with steam vessels of all kinds, John Noble of Staten Island, who unpaid bill. Two years after his little tug Titan had towed our knows the industrial waterfront so well he seems like a creative great sailing ship Wavertree to New York from Buenos Aires, we resident god of it-that is, one gets the feeling it came into being still owed $5,000 of the bill. When his agent called to say Mr. according to his lithographs, rather then the other way Wijsmuller was in town and would like to come see me about our round-and John&#39;s student Ron van den Bos, and the West unpaid bill, I had just then got funds together to cover it. Since Coast&#39;s Steve Mayo and 32-year old Steven Cryan who has a the treasurer was out of town (and his signature was required gallery on the Connecticut River at Saybrook.* with mine on all checks over $2500) I made out two checks for And there are writers who enter into the tugboat world and ex$2500 each and handed them to Mr, Wijsmuller when he arpress some of its meanings. Jan de Hartog, for one-and a very rived. I told him that it might seem incredible to him, but in fact true-to-life one for he worked on tugs and is said to live aboard we had just got this money together and would have paid him whether he had come to call or not. I think he said something to *Mr. Brett&#39;s work may be seen in Sea History 11 and 21, Mr. Muller &#39;s in the effect that no one would be capable of uttering such an SHIO and 20, and John Noble&#39;s in SH8 and 23; some of Steve Cryan&#39;s unbelievable lie with a straight face, so I must be telling the work is shown in this issue, and Ron van den Bos&#39;s is presented on pages truth. We got on famously! 32-34. SEA HISTORY, AUTUMN 1982