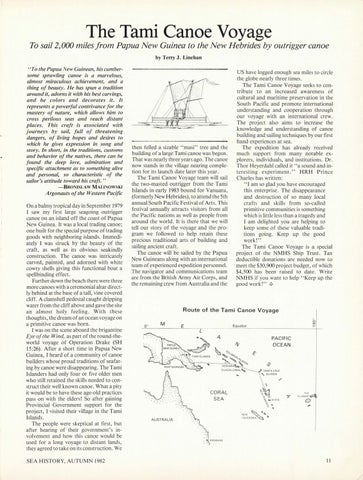 The Tailli Canoe Voyage To sail 2, 000 miles from Papua New Guinea to the New Hebrides by outrigger canoe by Terry J. Linehan

&#39;&#39;To the Papua New Guinean, his cumbersome sprawling canoe is a marvelous, almost miraculous achievement, and a thing of beauty. He has spun a tradition around it, adorns it with his best carvings, and he colors and decorates it. It represents a power/ul contrivance for the mastery of nature, which allows him to cross perilous seas and reach distant places. This craft is associated with journeys by sail, full of threatening dangers, of living hopes and desires to which he gives expression in song and story. In short, in the traditions, customs and behavior of the natives, there can be found the deep love, admiration and specific attachment as to something alive and personal, so characteristic of the sailor&#39;s attitude toward his craft. &quot; -BRON ISLA W MALINOWSKI

Argonauts of the Western Pacific On a balmy tropical day in September 1979 I saw my first large seagoing outrigger canoe on an island off the coast of Papua New Guinea. It was a local trading canoe; one built for the special purpose of trading goods with neighboring islands. Immediately I was struck by the beauty of the craft, as well as its obvious seakindly construction. The canoe was intricately carved, painted, and adorned with white cowry shells giving this functional boat a spellbinding effect. Further down the beach there were three more canoes with a ceremonial altar directly behind at the base of a tall, vine covered cliff. A clamshell pedestal caught dripping water from the cliff above and gave the site an almost holy feeling. With these thoughts, the dream of an ocean voyage on a primitive canoe was born. I was on the scene aboard the brigantine Eye of the Wind, as part of the round-theworld voyage of Operation Drake (SH 15 :26). After a short time in Papua New Guinea, I heard of a community of canoe builders whose proud traditions of seafaring by canoe were disappearing. The Tami Islanders had only four or five older men who still retained the skills needed to construct their well known canoe. What a pity it would be to have these age-old practices pass on with the elders! So after gaining Provincial Government support for the project, I visited their village in the Tami Islands . The people were skeptical at first, but after hearing of their government&#39;s involvement and how this canoe would be used for a long voyage to distant lands, they agreed to take on its construction. We SEA HISTORY, AUTUMN 1982

then felled a sizable &quot; masi&quot; tree and the building of a large Tami canoe was begun. That was nearl y three years ago. The canoe now stands in the village nearing completion for its launch date later this year. The Tami Canoe Voyage team will sail the two-masted outrigger from the Tami Islands in early 1983 bound for Vanuatu, (formerly New Hebrides), to attend the 5th annual South Pacific Festival of Arts. This festival annually attracts visitors from all the Pacific nations as well as people from around the world. It is there that we will tell our story of the voyage and th e progra m we followed to help retain these precious traditional arts of building and sailing ancient craft. The canoe will be sailed by the Papua New Guineans along with an international team of experienced expedition personnel. The navigator and communications team are from the British Army Air Corps, and the remaining crew from Australia and the

US have logged enough sea miles to circle the globe nearly three times. The Tami Canoe Voyage seeks to contribute to an increased awareness of cultural and maritime preservation in the South Pacific and promote international understanding and cooperation through our voyage with an international crew . The project also aims to increase the knowledge and understanding of canoe building and sailing techniques by our first hand experiences at sea. The expedition has already received much support from many notable explorers, individuals, and institutions. Dr. Thor H eyerdahl called it &quot;a sound and interesting experiment.&#39;&#39; HRH Prince Charles has written: &quot;I am so glad you have encouraged this enterprise. The disappearance and destruction of so man y local crafts and skills from so-called primitive communities is something which is little less than a traged y and I am delighted you are helping to keep some of these valuable traditions going. Keep up the good work!&quot; The Tami Canoe Voyage is a special project of the NMHS Ship Trust. Tax deductible donations are needed now to meet th e $30,900 project budget, of which $4,500 has been raised to date. Write NMHS if you want to help &quot; Keep up the good work!&quot; .V

Route of the Tami Canoe Voyage